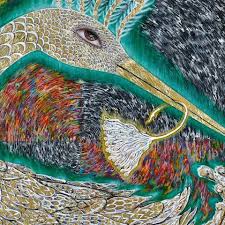 “It is, perhaps, finally a good time to be a woman”, says Dua Abbas Rizvi in the publication of the group show Chaar Aurtein, Chaar Kahaniyaan (Four W

Open Presence
Art for a Cause
Sweeping Back the Sea

“It is, perhaps, finally a good time to be a woman”, says Dua Abbas Rizvi in the publication of the group show Chaar Aurtein, Chaar Kahaniyaan (Four Women, Four Stories), which opened at Sanat Gallery in Karachi on April 25, 2018. Rizvi goes on to recognize global campaigns like the #MeToo movement in 2017, as well as local female-led bike rallies across Pakistan, signifying that, whether on a large or small scale, the role that women play in both their private and public spaces has changed significantly over the course of time.

Farazeh Syed showcases four almost monochromatic acrylic paintings dealing primarily with the female body, however, in a way that denounces the conventionality of gender ideals, bordering instead on the unusual and absurd. Calling them self-portraits, the contrast that can be seen in these two set of figures is that in the first one, the female figure appears constrained and submissive, while the other set of figures appear more free and self-assured in their face-forward stance, albeit still somehow seeming restricted because of the ghost sheet covering their faces. Syed is therefore commenting on the many ways that home-bound women are made to observe an absurd amount of responsibilities and still oblige diligently, as well as commenting on working women who are comparatively free to make their own choices, but still feel restricted and concealed against the kind of demands imposed on them by society.

Saba Khan’s smaller mixed media pieces integrate paint, glitter, beads and paper, to create a witty narrative commenting on the nature of desiring ‘socially acceptable’ luxuries, particularly in the home space. Hues of pinks and purples stand out amongst the child-like use of plastic beads and glitter. Khan uses kitschy imagery reminiscent of contrasting households to construct a satire around particular tastes and fashions in creating the ideal home, and then having the need to display it on social media for validation. Two pieces display the exterior landscape of a ‘dream house’. The other two pieces deal with indoor spaces, one depicting a bed with the words ‘Cozy Dreamz’ written on top in glitter. Her purposeful change of the word ‘dreams’ to ‘Dreamz’ very subtly identifies the different class structures that are categorized by something as trivial as the decoration of a home space.

Sadaf Naeem creates a certain hushed mood in her oil paintings, dealing with her interest in the stories that take place in secret and in whispers. Once again depicting mainly the home space, her imagery displays silhouettes of women behind trees and plants, creating shadow-like characters. Each painting consists of pairs of female figures, insinuating that they have conversations quietly, perhaps while doing household work. One particular painting titled ‘In a row’ shows almost identical silhouettes of women standing in a line within the confines of a grilled fence, holding an infant in their arms. A metaphor of women being tied to household and maternal duties resonates deeply in Naeem’s imagery, perhaps also pointing at how women continue to perform those tasks in silence and only speak of how they feel in whispers, so as not to disrupt societal demands.

Sana Arjumand also looks at motherhood and the home in the metaphorical sense. The main iconography used in her acrylic and gold leaf paintings is that of the Maryam Booti flower, which she uses to symbolize the environment of growth, nurture and expansion within the home. She also uses the image of a bird, possibly a mix of the peacock, flamingo and crane. The long-necked and long-beaked birds are painted with eerily human-like eyes, creating a sense of connect between the intrinsic and natural understanding of motherhood in both the human and animal sense. Drawing inspiration from being a mother herself, the two birds in her imagery therefore, one larger and one small perhaps also depict a mother and child, wherein the mother helps her child navigate its life as it grows older, and how the home provides a space that acts a learning ground for its strengths and weaknesses.

While today it may possibly be a time when a certain privileged class of women can finally choose to both delve into the workplace as well as maintaining a home life, (instead of simply being told they do not possess a choice) it would seem that women in all different spectrums of society cannot escape the discussion of the Work-Life Balance just yet. Now, however, the dialogue that is created through these works may to a certain extent lead to a grey area being created.