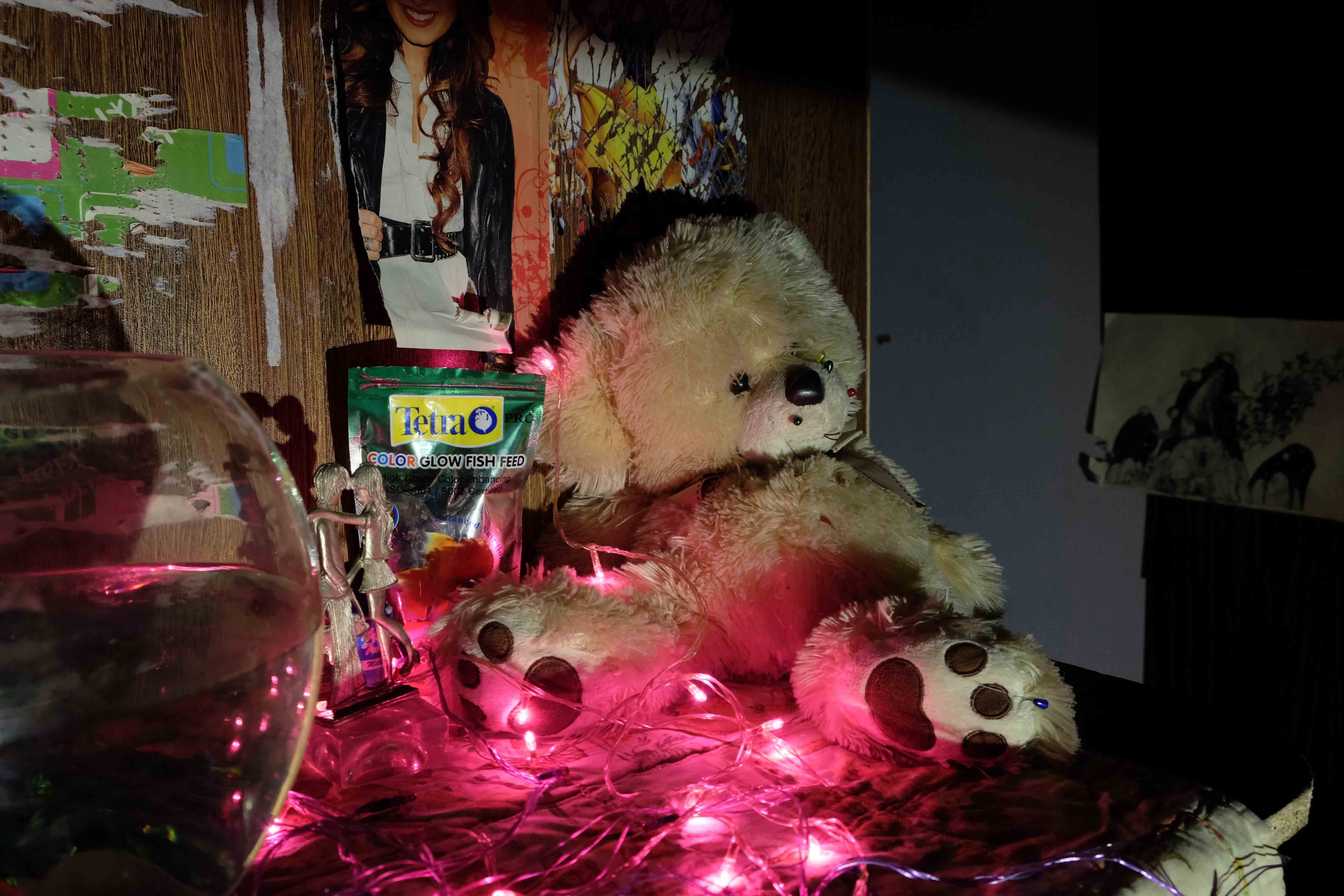 It is ironic that in overcrowded cities, despite such physical proximity to each other, we are unable to dispel feelings of isolation and loneliness.

It is ironic that in overcrowded cities, despite such physical proximity to each other, we are unable to dispel feelings of isolation and loneliness. At other times we are simultaneously both passive and active participants for one is dazzled by the expansive nature of the city itself and its pulsating energy; yet the sensory experience of individual urban existence can be disenchanting and ensconced in other darker undertones.

“Four Room”, an exhibition that opened at the Punjab Institute of Languages and Culture, Qaddafi Stadium sought to engage viewers with the complexity of these ideas. The group exhibition, curated by Anum Lashari, consisted of installations by four artists and was part of the Lahore Biennale’s lineup of collateral events that opened on March 29th. The Paint Bucket is fundamentally an online Gallery and the first of its kind in Pakistan. The gallery’s primary aim has been to promote young artists.

For this exhibition all four artists were allotted spaces or “rooms” in which to construct installations. Lasharie said she had put together all four artists “because their work not only stands alone, put together, it forms a unique narrative on our everyday lives and how we interact with each other.”

Nairah Shajeal had sought inspiration from the constant process of demolition and reconstruction taking place in the city. A ladder, a locked door, bricks, tiles, a sewage drain cover, a pipe, shuttering planks were all featured so as to recreate the interior of a space under construction. Yet their material existence and physicality had been subverted through the use of polyester fibre and silicone in their making.

They were hollow casts of objects. As one stepped into the space it appeared to be suffused in diaphanous white forms that were now former “shells” of the original objects.

This will-o’-the-wisp quality was accentuated by the fact that one could easily assume that the object would dissipate in a cloud if one were to attempt touching it. Sharjeal mentioned that she was fascinated by the act of snakes shedding their former skin which was also translucent.

“…the focus is more on what is left behind than what moves on in this process of metamorphosis.”

While Sharjeal’s quiet work explored the poignant and ephemeral nature of existence Suleman Faisal’s installation titled “Don’t Think Twice” lived up to its name and asserted its materiality albeit in the most disturbing way. Viewers could be seen or rather heard stomping and traipsing over a bed of malevolent black objects that let out discordant squeaks as they moved across it. Was it a bed of coal? Were we meant to endure and recreate the painful rite of passage of walking on burning coal embers? The audience didn’t seem to think so as they bounced about in glee.

The “objects” in question were actually cheap plastic toys that had been cast in rubber. Expanding on this violent performative act, Faisal explained

“ I have always thought how as a child one probably adores high pitch sounds and how that admiration changes once you grow up. The gradual transition which turns a squeak into a shriek has kept me awake many nights and this installation is a result of that thought process”

Nightmares were also on Sana Jafri’s mind as she took people through “Hide and Seek” which was a narrow corridor that recreated her closet space and contained her most personal belongings that encapsulated her hopes, desires, dreams. Yet its cramped oppressiveness and dim lighting made it hard to physically breathe; the journey did not suggest nostalgia but festering thoughts and brooding

“ the closet is a space where one would run away from traumatic childhood experiences, seek refuge and get comfortable with yourself. It is the darkness and the light at the end of the tunnel.”

As one stepped out of the “closet”, Jafri’s stop motion video which was a dark and immersive combination of animation and claymation completed this narrative. It featured a recreation of her bedroom  using toys and miniature objects. One watched, at once both entranced and horrified as clay tentacles, dark shadows and invasive writhing forms embodying our worst fears transformed our experience of a harmless personal space.

Saad Ahmed’s installation “What Seeks You” dazzled the eyes, literally. One commenced walking alongside a rectangular silver mirror containing a flickering mass of plexiglas cubes in varying sizes. They proceeded to pour out of the rectangle and into a space that consisted of a dim blue wall that glowed and flickered with reflective squares as they travelled across its length. Cold yet dream-like it offered a transient experience.

Ahmed explained that the cubes were representative of pixels and that the half formed pixelated image was akin to unanswered and unresolved questions. He looked upon his work as a discourse about communication- technology can transmit ideas but also represents control and enforcement mediated through mass media and its infiltration in our daily life in the form of instant news coverage.

While all the artists referenced urban life in some way, each of their allotted “rooms” offered a unique experiential environment that was both unsettling and absorbing.

Installation transcends the experience of viewing something on a two dimensional surface. It can be intense and liberating. This emancipation was evident with visitors encountering and inquiring about artistic ideas with a fresh perspective and an ebullient curiosity.