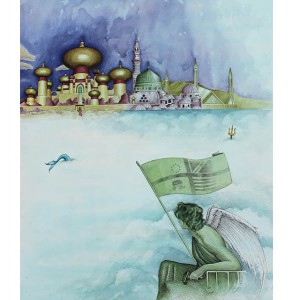 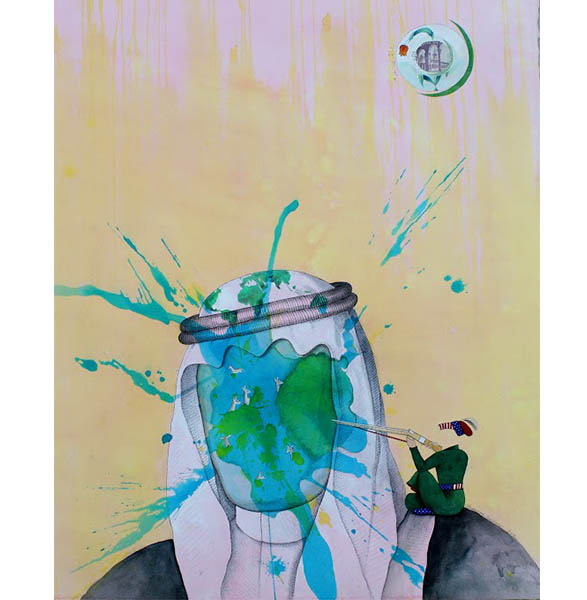 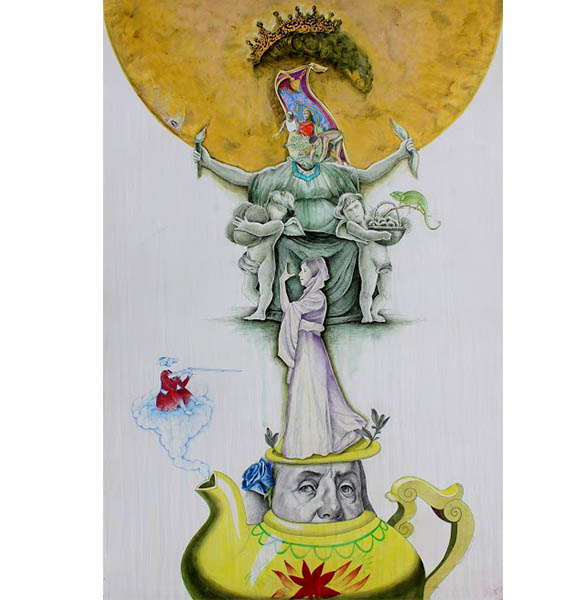 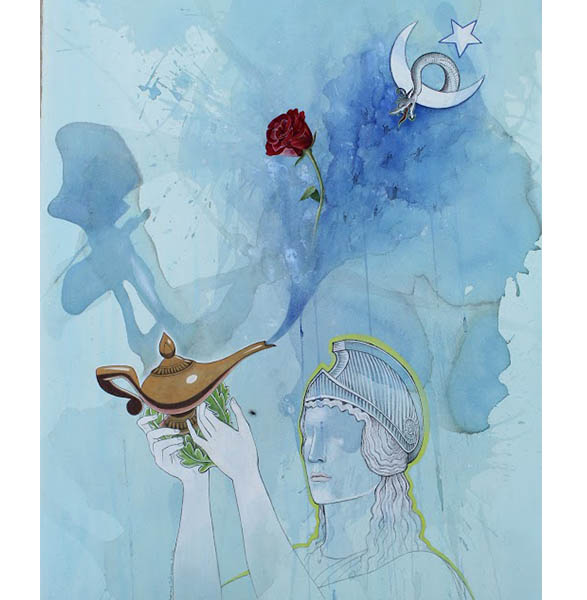 For All That Lies

The human mind develops in wondrous ways – self sustaining, yet reliant, level headed but also temperamental. And often obdurate, but mostly malleable. In fact it is its very pliable nature that makes us vulnerable to deception. Erased and reconfigured, our molded minds navigate through our natural and social environments in the struggle for existence. And while doing so, often overlook the most everyday activities and virtues which we have been brainwashed into welcoming as either a social norm, or something innate.
Shanzay Subzwari encapsulates this phenomena in her first solo exhibition “Tale as old as time” held at Sanat Initiative. She adheres the notion of everyday deception to the banner of consumerism. After all while the subject of consumerism may be a convoluted labyrinth in itself, it is arguably a form of deception. Human beings now seek pleasure in consumption. The infinite wants have led an unabated drive to fulfill desires. The pinnacle of content is higher. No matter what we have we will always yearn for more. The artist claims it is this gluttonous nature which various players such as consumer brands, the media, and even many politicians cash in on.
Formally trained in miniature art as well as painting, it was captivating to not only witness the fluid melange of two genres but also experience the versatility evident in her choice of mixed media. Her work is an eclectic congregation of images appropriated from Disney films, currency notes as well as from antiquated traditional miniature practice. Intriguingly, the periodic imageries not only reflect on the bygone but also form a narrative on the current happenings which significantly alter our social atmosphere. In her words, it is an open ended socio-political commentary.
By visually sewing together illustrations from mentioned sources Subzwari essentially braids the subliminal relation amongst them which often passes unnoticed yet holds pertinence to this day. Subzwari is inadvertently drawn to paint her concern for the political climate beyond our borders; as many of her visuals not only critique the local turmoil but also refer to the Indo-Pak partition, the ongoing Syrian refugee crisis, and the impending elections in the United States. Through superimposed portraits and their strategic placement on paper, she mimics the hierarchy amongst countries. The subservience of and the dominance on one another is very apparent.
Fire spewing Maleficent looms over the Ziarat residency. Laid on a hundred rupees note, the legendary beast metaphors the tragic incident in 2013 when militants burnt down the majestic house which Jinnah once called home. Similarly, in ‘Poor unfortunate souls’, Ursula from Little Mermaid reveals her presence from behind the National Bank of Pakistan as her tentacles writhe out of the edifice in an obsolete five hundred rupees note.
Ursula reappears in another painting. Aptly titled ‘Life’s full of tough decisions, isn’t it’, she seems to distance Jinnah and Gandhi from one other as their face fade on her either side. Wrapped in the villain’s legs is a man clenching an olive branch; he assumably bridges the void between the two nations. Subzwari ingeniously places the scene on a very appropriate US dollar bill.

In a poignant diptych ‘We’ll always be friends forever, won’t we’, Subzwari uses an immemorial ten rupees note from early 1950’s. Stirringly, State bank of Pakistan appropriated the identical design of Indian banknotes for its currency during the country’s infancy. A poetic addition, Subzwari paints Tod and Tweed- the fox and the hound
-on either notes. The tale goes that the two were the best of friends but realized they were biologically programmed to be rivals. They gradually drift apart as they grow, yet their concern for the other never diminishes.
In ‘I’m gonna tell God everything’ former Syrian president Hafez Al-Assad’s portrait melts and drips next to a blooming rose; as first President of United States George Washington – bracing the UK monarch’s crown – surreptitiously peeps from below. My dinner is still in the woods displays an unidentified Saudi royal whose ghutra bears the global map. On his shoulder sits a hunter adorned in colors of the US flag; aiming for minute deers scattered within the face. The Syrian crescent precariously hangs over the royal’s portrait. The work comments on the dubious stance of the Arab country in response to the Syrian crisis. Moreover it critiques its questionable position in the political arena while also satirizing its exploitation of its own oil reserves.
Subzwari lays particular stress on the increasingly worrying perception of the west against Muslims. In Where they live an angel symbolizing the occident peers onto distant structures. The Faisal Mosque and the Masjid un Nabwi – both taken from their respective country’s notes – are conjoined to the Sultan’s palace from Aladdin. This piece takes inspiration from a recent poll study which found over 30% of Republicans supported bombing of Agrabah – oblivious that it is in fact a fictional city. Subzwari highlights how facilely one’s mind can be manipulated by the media and political figures into adopting certain beliefs as sacrosanct.

For her the icons from animated Disney movies execute an imperative purpose in supplementing the discourse. Subzwari underlines the very uplifting nature of these visuals which otherwise contain morose plots. She intends not to make a mockery of a grave situation but to create a fantastical realm which one often teleports to upon viewing such perceivably lighthearted images. Also a form of consumerism, Disney films have been an influential ingredient in every child’s upbringing. It creates false realities, propogates certain stereotypes, and elevates our expectations. Happiness for instance is associated to
conjugating with a prince. Subzwari’s work is a chronicle in itself – a trip down memory lane recording familiar instances and illustrations. The oeuvre continues to arouse emotions and interest. In part this is due to her adroit use of visual puns which sparks not only an explosion of deceit but also of the ingrained materialistic nature mankind pursues.

However, some forms of deception aren’t exactly lies: comb-overs, white lies, and silent nods also exist. And then there are lies we continuously convince ourselves of for a spectrum of reasons from stabilizing one’s rationale, to severe delusions beyond our control. Are there circumstances under which chicanery could be considered ethically and morally acceptable? The time to anatomize the debate on this matter is overdue.

One Response to For All That Lies