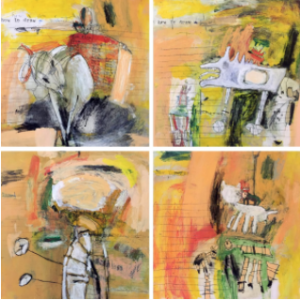 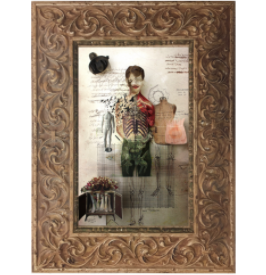 Five are the artists selected by curator Zahra Khan for You Selfish Dreamer, the group exhibition presented in the new space of the Italian gallery Rossi & Rossi in London. Five, like the characters of the Tennessee Williams’ play, The Glass Menagerie, which inspired the title of the show. From November 23 to 26, recent works by Pakistani artists Rabeya Jalil, Heraa Khan, Saba Khan, Veera Rustomji and Mohsin Shafi were displayed on the second floor of the Georgian House, in Mayfair.

The exhibition was divided into three rooms, including a small entrance and two middle-sized rooms on each side of it, which gave the gallery the dimension and the allure of a domestic space. Rossi & Rossi, which has been representing for many years established artists such as Rasheed Araeen, Naiza Khan and Faiza Butt, was not new to art produced by Pakistani authors. The good news is that You Selfish Dreamer is only the first step towards a long-term collaboration between the gallery and Art Divvy – the platform recently created by the curator of the show – to promote and support young artists from Pakistan.

Like the characters of the popular Tennessee Williams’ play, defined by the same author as a ‘memory play’, the five artists exhibited in London were digging both into their own personal and collective memories, to analyse the ever-changing codes of a complex and stratified society, and shape a common, derived contemporaneity.

On the occasion of You Selfish Dreamer, Mohsin Shafi, who is also a member of the Awami Art Collective – the artists and activists’ collective that focuses on cultural, social and political matters – proposed a series of tri-dimensional collages. His works were unusual ‘story boxes’, constructed on architectural backdrops or prints of archival documents, and inhabited by imaginary characters and surrealistic objects. The various and heterogeneous layers of these visionary compositions were sealed into glass boxes and colourful, baroque frames.

Much more impulsive and unpredictable appeared Rebeya Jalil’s works; expressionist, gestural, acrylic paintings on board, with primitive drawings of animals and humans. As mentioned by Faiza Butt in the catalogue’s introduction, Rebeya was intrigued by the various attitudes mankind has been adopting, according to the different social contexts it might find itself in. Rebeya is particularly interested in the social conventions of her own environment, and the power, richness and violence of her style is probably a call for freedom and spontaneity.

For the exhibition You Selfish Dreamer, Saba Khan proposed a series of digitally printed pieces of fabric embroidered with colourful threads, representing landscapes, still lives or flowers. Within the composition, one can also spot a coded alphabet in which every colour is related to a Latin letter. This series of works, inspired by conversations the artist had with her grand-aunt, tell about the women condition during the dramatic era of the subcontinental Partition. Saba’s embroideries are, in fact, symbolic evidences of the many silenced stories of harassment and violence.

Heraa Khan is also reflecting on the role of women in society and on how this role has been evolving in time. Using traditional miniature painting techniques, she depicted isolated women, interacting with their own mirrored images while playing cards, getting ready for social gatherings, dressing up, in what looks like luxurious, yet confined, domestic set-ups.

Finally, Veera Rustomji. who has been working on the creating of an archive of Karachi’s communities mainly based on family photographs and documents, displayed a series of oil on canvas paintings. The works referred to certain specific childhood memories of the artist and in particular the ones related to her grandmother playing the tile-based game of Mahjong with her friends.

Despite the variety of media used by the artists and the very different outcomes, the works all had in common an intimate, confidential aspect and an immersive depth. This was due to the characteristics of the exhibition space, the autobiographical contents and the same nature of the themes tackled in each work, as well as their limited physical dimension, and the accurate and detailed execution of most of them.