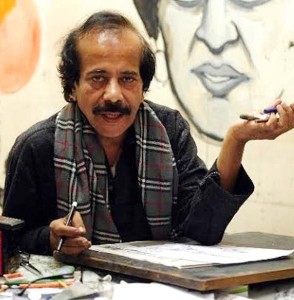 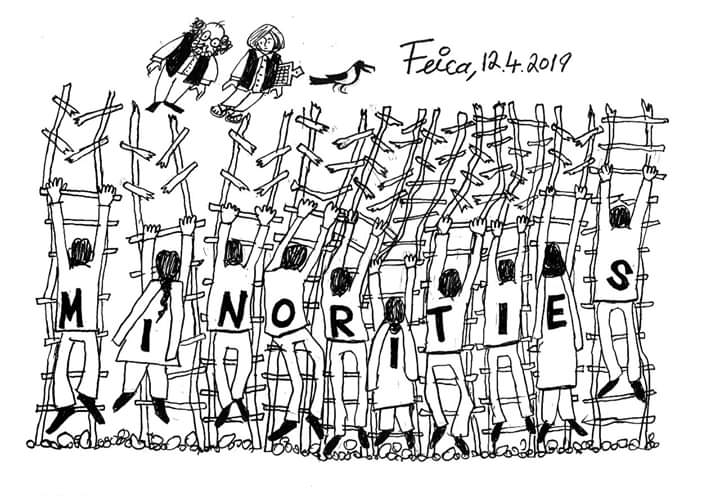 Interview with Cartoonist Feica was conducted and recorded by Muhammad Ashraf on Oct 29th, 2019 at his residence, PECHS Society Karachi.

The first cartoon I drew was of my Phupha (uncle) who slapped me once. My native home is in Multan. In our society, kids in one way or another, at an early age get sexual harassment.  I was very aggressive and always responded forcefully whenever someone tried any kind of sexual abuse to me. There was a big courtyard in our Multan house. When my Phupha slapped me; I sat beside the wall with full of anger. There were burnt logs; I picked one and started hitting it with full vigor on the cemented wall so that my aggression gets released. Log’s charcoal spread all over the wall and I got realized that there is a kind of mustache-shape that appeared. I started enjoying that a comic feature had been coming-out. I brought chalk and started making teeth and bald head of my Phupha. A complete Phupha character got appeared. It was a kind of automatic drawing based on intuitional creative approach. When the sketch was approximately seventy-percent completed, during the process my mind took hold of with the understanding that chalk and charcoal are not working on the cemented texture the way my creative approach pursuits, so subconsciously I took a bucket of water and threw on the wall, and continued making the drawing. It allowed me to smudge the material, whatever the creative approach was being apprehended by my mind. It was approximately a 36×30 inches cartoon. The cartoon shaped up a hideous Phupha with full to bursting eyes, giant mustache and a complete bald-head. That was my first cartoon. It took me more than three hours to complete it in the scorching summer of Multan.

An aggressive, short height, dark complexion with his iconic mustache, the greatest Feica, Rafique Ahmad, who probably is the most famous cartoonist of his times, was born in Multan in 1957 and studied Fine Arts at National College of Arts, Lahore. He joined NCA in 1974 after completing his matriculation – at that time admission to NCA was after ten years of schooling. He completed his college in 1979.

Feica started his career as a cartoonist with The Frontier Post Peshawar. He did some jobs in the print media industry before joining the said newspaper. But it was The Frontier Post Lahore where he got real freedom, full support from the newspaper to express political commentary daringly on the socio-political issues of Pakistan. “Frontier post kept me like a flower. I used to make the six columns cartoon. Owners of The Frontier Post gave me immense respect. Whatever the machines I suggested they bought, whosoever journalists and editors I recommended were hired.” praised Feica.  A blunt and belligerent by nature, Feica availed full support of The Frontier Post and got published his fully politically charged cartoons during the Zia-Ul-Haq regime, the most politically oppressive time period in the history of Pakistan. Feica worked in The Frontier Post Lahore for many years and got retirement from DAWN. Nowadays his cartoons are being published in Daily Times and he seems extremely happy and satisfied as the newspaper has given him freedom, support, and respect. Feica draws seven cartoons a week for Daily Times, Lahore. For some time in Karachi, Feica worked with MNJ advertising as a storyboard writer and illustrator but left early because of its limited scope and opportunities. Nowadays Feica resides in PECHS Society Karachi, Pakistan. Feica along with some other cartoonists has established a Union of Pakistani Cartoonist recently.

Feica was known as a BILO BHAI in the broadcasting world. He used to be a program manager for four radios in Karachi. This phenomenon is not much known to people and that segment of his life remained for around seventeen years. Feica was hired first time for the radio in 2001. “I got new training while working on the radio. There I stopped abusive and vulgar talk; I quit vulgarity in conversation so no bad word uttered from my mouth anymore,” told Feica who is now in the sixties.

Feica has also held exhibitions of his cartoons. In the late eighties, he had a show at Nairang Gallery, Lahore and there I first time met Feica with sculptor, Ghulam Nabi. The show comprised of the cartoons created during the Zia regime commenting on the despotic rule and its consequences. Recently he has shown his work at Artchowk Gallery Karachi.

“Nowadays I am writing a novel. Soon after my birth, my mother went into a coma and prolonged unconsciousness for more than six months. I was fed by the maid-servant.   Whatever the stories my mother told me; I am compiling all those in my novel.” explained Feica.

“Interviews of senior professionals ought to be recorded because it’s an essence of experiences. They are history and through that one can investigate the past and later may articulate the future.” suggested Feica.

During NCA life with fellow friends, I published a handwritten newspaper. It was an eight columns funny side newspaper that had editors, columnists, and cartoonists. Our reporter name was like ‘Nama Nigar Heera Pheree’, columnist name ‘Alo Kechalo’ and so on. It was a good practice and fun but also became controversial, too because of satire and funny commentary. At NCA, it was a common routine that everyone would have a nickname. Once I brought different kinds of bottles and arranged a still life; consequently, my fellow students gave me the name ‘Botel wala Jin’.

Salima Hashmi at that time was young and a very beautiful lady with blue eyes wearing pants; well you know, when the teacher is so beautiful there is more joy in learning. She many times, commented that your painting is a cartoon. Anwar Saeed and Afshar Malik both are great artists; they used to comment that Feica is not a painter rather a cartoonist. Afshar Malik’s visual is also a comic base. He is one of the greatest artists in this country. He might not have an interest in becoming a professional cartoonist; even I never planned to become a cartoonist. It was just a life moved in that direction. A skilled drawing does not mean that one can become a good cartoonist or artist. One has to go through the creative process along with the life-experiences.

A cartoon is an outcome of the drawing. The cartoon is an art and it is a drawing base commentary. Carto is a Latin word that means a map. “I think cartoon derived from Carto.” explained Feica.

Editorial cartoon publishes on the editorial page and is an essential component. It’s a signature of the cartoonist. Sometimes it takes three to four days in scrutinizing the political idea; it’s a creative process. Cartoons on the generalized ideas are easy to make. Cartoonists look at editorials thoroughly before selecting the topic or issue for the political critique. Sometimes newspapers dictate cartoonists about topic, issue or type. “This has happened with me as well, as a result, I left that newspaper.” said Feica. Now many newspapers’ owners have become chief editors of their newspapers and dictate people to produce cartoons according to their will. It’s unfortunate. This is a kind of suppression on the freedom of speech which results in disguised drawings.

Cartoonist Feica, undoubtedly is the most talented cartoonist of his times in Pakistan. He symbolizes big ideas and exaggerates figures or objects to communicate directly without labeling much of his drawings. Perhaps the best cartoon is without any captions. It has the language of itself.  Rarely Feica has produced cartoons with long captions. Though caption writing itself is an art. There are many cartoonists whose cartoons are dependent on captions. If the caption is removed there is no cartoon since their visual is weak and is dependent on captions. Feica does not write much text in his cartoon. He used very less text. His visual is extremely powerful and is not dependent on the caption. Feica in his every cartoon presents two figures: a man and a girl along with a crow. Man symbolizes Feica and the girl is a symbol of his daughter. It is Feica’s signature. They silently stand in every cartoon as an audience.