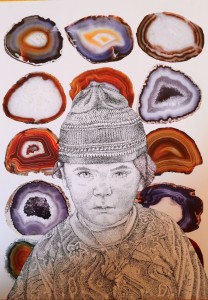 Faiza Butt: “We can only live because we imagine that we are infinite.”

Faiza Butt is one of Pakistan’s most dynamic artists. Charismatic, passionate, and intelligent, she successfully transfers those qualities into her art, which is instantly recognizable by its iridescent, highly detailed surface, and by the richness of the artist’s concept and message.
Butt says, “You are fated to be an artist and you cannot be anything else. It is a gift.”
Unafraid to pursue and portray heavy topics, Butt is ever mindful of her viewer. Interested in instigating healthy conversations and spreading awareness, she purposefully envelopes her difficult subject matter, often inspired by photographs that she collects, in the ethereal folds of her dot-based art-making process. Her work is beautiful to look at and it is only when the viewer has absorbed the lovely surface that they begin to notice the global concerns that the extraordinary artist has tackled.
“The impetus of wanting to make work is to make purposeful work, work which has a social purpose. Artists are social commentators who log and record what is happening around them. It is a very noble responsibility, for knowledge is projected to us through multiple prisms.”
Her artworks resemble intricate tapestries; in reality they are elaborate drawings composed of hundreds of multi-coloured point marks. Time consuming – some artworks take weeks to complete – and meticulous, the process is therapeutic for her, and is her personal, contemporary take on traditional miniature art. Butt stresses the importance of moving forward while still holding on to one’s ideals and histories.
“My goal is to take something very gritty and then take it to a place of light, and start a conversation so people don’t shrink off, shy away or mask themselves.”
Hailing from the revolutionary generation of NCA (National College of Arts) alumni that included Rashid Rana, Shahzia Sikander, and Imran Qureshi, all extremely successful and talented artists, Butt was inspired by her dedicated professors and passionate peers, particularly Rana whose concept based artworks continue to enthuse her.
“We all affected each other and inspired each other, there was something intangible there. Progression doesn’t happen in a bubble.”
A dedicated mother and wife, Butt is an artistic powerhouse. After a residency in South Africa, Butt moved to London to pursue an MA at Slade School of Fine Arts in London and graduated with a distinction. She credits her family with being her rock, and helping her to step out of her comfort zone and embrace new possibilities that enrich her life.
When asked what influenced her practice the most, Butt immediately refers to Michael Craig Martin’s lectures at Slade: he encouraged his students to allow themselves to be influenced by their surroundings, by popular culture, and the present. Butt has abided by his teachings, everything she experiences influences her work, and this innate curiosity forms the backdrop of her practice. She is determined to examine the layers of society and culture. Time spent exploring parts of London, and localizing herself with English culture is part of an education she takes seriously.
“Culture is an open system, it is not set in stone, it develops and is absorbed from one another. It grows as we speak.”
Although she agrees that her art is political, Butt believes that her work deals with the human condition. Its expansive breadth includes delving into popular culture, gender bias and current affairs. As an artist from Pakistan, she is influenced and attuned with changes and patterns of growth within Pakistan. Butt is conscious that her homeland continues to transform, yet she is unwilling to have her art be culturally framed – aware of the global nature of her audience, she is interested in conversing with a wider international audience.
“My work is not sensational just for the sake of being sensational. It is not political because I am angry. It is about absorbing what is happening around me and coding what is important.”
Butt has several forthcoming shows which she is working towards. The Image of an Image, featuring work from past shows including pieces from her acclaimed Pehlvan series opens at Canvas Gallery this month, while Ethereal, which will also feature the work of Subodh Gupta and Rashid Rana,opens in September, at the Leila Heller Gallery, New York. A solo exhibition currently titled Symmetry opens at Rossi & Rossi, London in December, and Butt is also working towards her first UK public show at the New Art Exchange in Nottingham, the show will open next summer and eventually travel to London.
When asked what was inspiring her right now, Butt’s tone becomes more sombre as she discusses the current international humanitarian crisis, which is directing her work for the solo show at Rossi & Rossi.
“We don’t understand death – it is a black curtain we cant see beyond. This body that is living, fading, dying. It is the closest thing to us. It is what we know.”
She describes how an image of the body of a child, beautifully peaceful, but surrounded by piles of rubble and rock, impacted her so acutely that her new series of work revolves around the life of child, against concepts of territory, and the symmetry of violence in the hyper-connected atmosphere of the internet age.
“History is full of parallel stories. Children search for heroes and villains to understand themselves. The quest of human nature is to understand the bridges between humanity.”
Butt’s unique and delicate work fulfills her desire to effectively record and portray current events. Given the fast-paced, swiftly changing nature of the international political climate, it will be extremely interesting to see the body of work that this perceptive artist eventually produces for her upcoming shows.