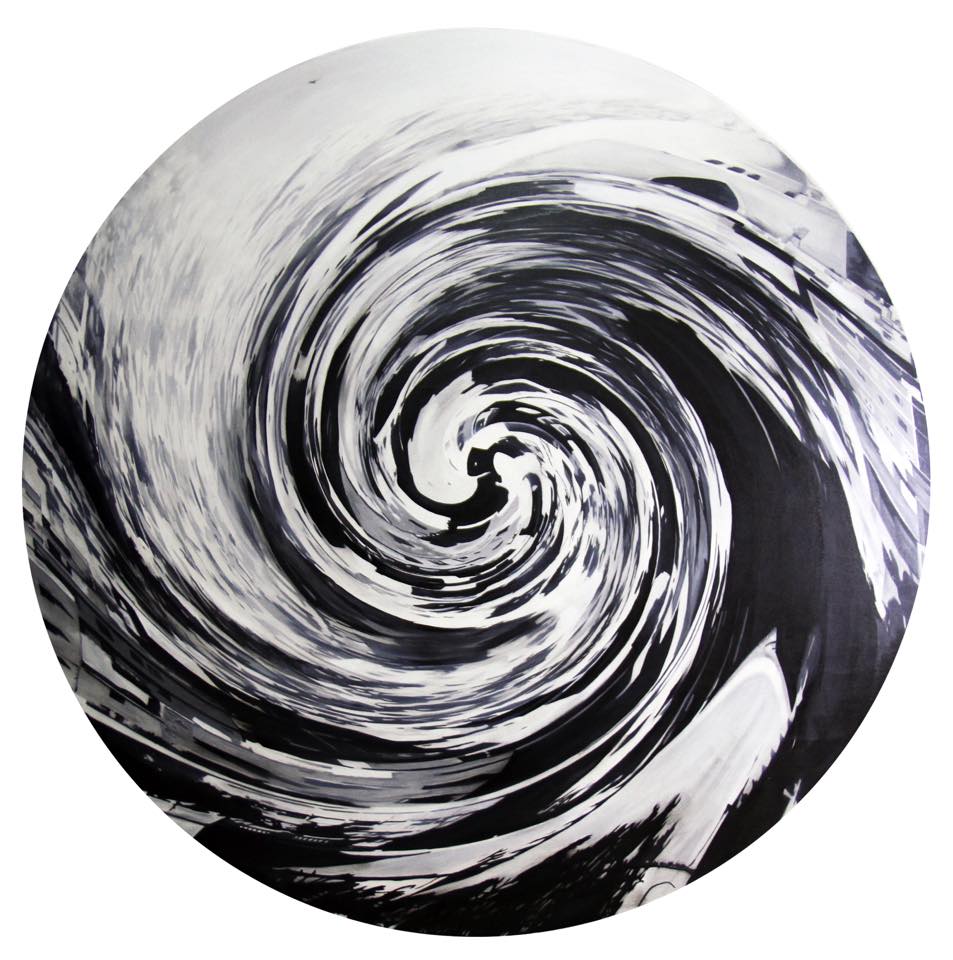 A metropolis like no other, Karachi has long been a source of inspiration for many. A city that has seen constant turmoil, it continues to develop, though slowly and is experienced differently by each section of society. The middleclass society makes up a huge part of the population and has a knowledge about the city that is exclusive to them.

‘Prologue-Epilogue’ was a show curated by Adeel uz Zafar at Sanat Initiative as part of the artist’s curatorial outreach. The show exhibited works from two emerging talents, Haider Ali Naqvi and Noman Siddiqui. Both belonging to middleclass backgrounds like the curator himself; the work explored their individual experiences and views with the city. Unlike group shows where multiples bodies of work are conversing at the same time, a two-person show is more direct with an intimate dialogue spread across the room.  These artists along with their curator have known each other for a long time and it was exciting to see what the trio had conjured up together in the enclosed white space.

Noman Siddiqui is a graduate from the Central Institute of Arts and Crafts (CIAC), Karachi and has long been inspired by the American Pop Movement of the sixties, which is mirrored in his hyper realistic sculptures.  No citizen in Karachi can go through life un-phased by the hodgepodge of political and social disputes that continue to plague us. Siddiqui not only has witnessed the turbulence, but also embraced it so much so that his pieces have all become satirical quips used to voice his opinions on issues.

A row of impeccably recreated lollipops is the first thing that comes into view when entering the gallery. Had it not been for the enlarged size, these fiberglass candies would have been mistaken for the real deal. The works are titled ‘Rangeen Goli’ and immediately remind one that candy is one of the easiest ways to quite down a wailing child because of its attractive hues and sweet taste. Siddiqui, perhaps, refers to how often the public is quieted down with false promises from politic party members or government officials served in neat packages and pretty bows.

‘Bari Nazuk Surat-e-Haal hai’ were a row of multi-coloured balloons, again so realistic; one was drawn to it by mere sight. Though constructed out of fiberglass, each piece emanated the weightlessness of a real air filled balloon. These contrasted with Siddiqui’s other balloon sculptures where massive pieces drooped on wooden furniture. These balloons composed a more lethargic and tiresome air and were evocative of big bellies; a sight often associated with government workers, like traffic policemen constantly demanding bribes to fill their own pockets and overlook traffic violations.

Similar to the inflated-like sculptures, ‘Muhje Kyu Pulahaya?’ is a replication of a Pit-Bull’s head blowing chewing gum. At its side was another head of a dog with a bandaged mouth with the title, ‘Wardi ka Game.’  This breed of dog is quite fierce when provoked and are senselessly baited against each other and betted on in illegal dogfights. Siddiqui manages to quiet down these creatures by keeping their mouths occupied, perhaps a metaphor for the lack of help from government officers or men of uniform (Wardi).

Much like the artist himself, Haider Ali Naqvi’s oeuvre hung quietly in comparison to the loud three-dimensional art of his fellow artist. However, also like the tall artist, his work is hard to miss; his monochromatic paintings invite you closer and provide a pleasing visual collocation to its vibrant partners. The artist’s work consists of meticulous pieces worked on with graphite and paint and responds to the current situation of Karachi.

Naqvi documents various areas in Karachi that are being developed and constructed on. However for construction to occur, deconstruction must first take place. ‘Battening City’ are painted on canvas and pasted onto metal plates. They tell stories of the spaces in Karachi where development is promised only to be forgotten half way and left in literal piles of garbage. The painting, though initially realistic, is disfigured into abstraction and made to look like a solid form of a scrunched up paper.

This technique of distortion is further seen in ‘Apathetic it was…’ where an unfinished graphite drawing shows an unmovable road traffic, with a bridge (something made to avoid such a scenario) in the background.  In ‘Utopia/Dystopia’ children are playing on amusement rides while surrounded by an undeveloped site that has been left disremembered. The largest piece on site is ‘Discoided Dystrophy’, a circular painted canvas, slowly rotating on a mechanism. The imagery is also abstracted into circular motions with the only notable structure being the Quaid-e-Azam Mazaar, a widely understood symbol for Karachi. The imagery almost sinks into the centre of the screen, as if pulled in by a cyclone.

What is so intriguing about Naqvi’s keen eye is that each piece not only understands the imagery being used, but also the medium. Each crumple or distortion is done mindfully in an attempt to add to the imagery and take nothing away. In ‘Utopia/Dystopia’ the art is pinned to drawing boards with reference images, pencil scribbles and extra board pins surrounding it. One work even has the business card of his framer pinned to it. This makes the work rugged, real and closer to the essence of the concept than something that would be framed neatly. His crumpled painting confuses the audience but at the same time creates a likeness to the actual space, which is in no way organised.

Looking in depth, there is a realisation that beyond the vibrancy and monochromic, the artworks compliment each other in more ways when discussing Karachi. Siddiqui speaks in metaphors, mocking the system and educating the public through easily digestible forms. Naqvi calmly responds, by displaying sombre imagery of his own personal surroundings, giving you truths in a somewhat straightforward way.