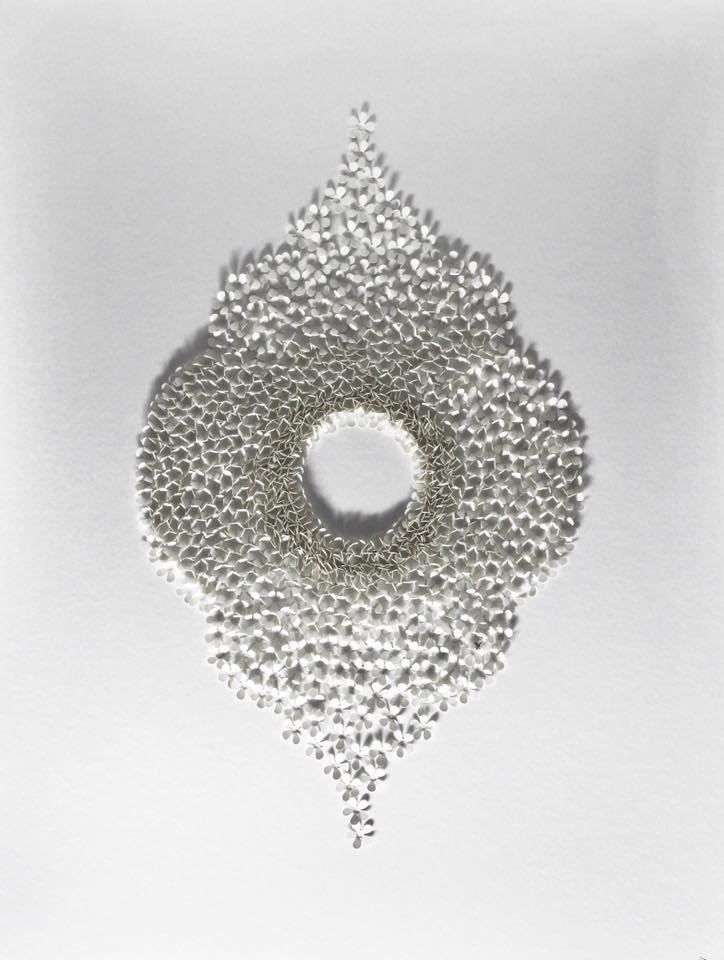 A group show titled Eclectic Mix took place at Sanat Gallery on 9th April, 2019 in Karachi. Curated by Adeel uz Zafar, this exhibition revolved around the personal journeys of four artists and the contribution of these journeys to their respective art practices. According to the conversations which were held between the participating artists and writer, Numair A. Abbasi, it was deduced that the works of all four artists seemed to be visually connected to each other, mainly because all four followed a repetitive pattern which interestingly, resulted into architectural forms.

Studying the work of Abida Dahri, one cannot help but notice the enigmatic pattern that the artist makes through the use of tape, using it as a source of healing. According to Dahri, she had been considered the odd one out in her family since childhood and while growing up, the appreciation she used to receive from her school assignments boosted her morale. Hence, the artist makes repetitive patterns through tape as a form of therapy; the even more intriguing part being that the various colored tapes applied resembled thread. By following a pattern, these repetitive lines came together to form a geometrical structure, adding to the deceptive quality of the work which the artist aimed to achieve in her visuals.[1]

Sulaman Arshad was another artist whose work not only followed a pattern of repetition but also eventually, led up to becoming an architectural piece just like Dahri’s. According to Arshad, he had a habit of cutting and punching out paper randomly through the punching machine which eventually became his visual language. Using a random habit to express his concerns, the tedious and dedicated process showed in the visuals made by the artist as bits of paper were brought together to create various compositions. Through the juxtaposition of these cut outs, not only was there an interesting play in light and shadow but it also brought in a sense of visual calm as the various shapes ended up becoming architectural.

Wajahat Saeed is an artist who used the medium of embroidery as a source of expression, being a textile student. Hailing from Parachinar which is based in Kurram Agency, Saeed uses the running stitch as a source of venting out his frustration of the wars and violence he experienced while growing up in the particular district. An interesting piece by Saeed titled ‘Am I Dead Yet?’ comprised of various shapes with human corpses lying amongst them, the entire art work embroidered in shades of pink and red. This artwork was perhaps his most engaging piece, depicting the harsh reality that the people residing in the Agency had to experience on a daily basis. With the use of layering in his work, there is an interesting sense of play within the lines and shapes of his visuals despite having an intense colour palette and concept, introducing the quality of deception just like the other two artists.

Finally, Yaseen Khan is an artist whose work revolves around his observation of the television static. Being a mechanic before becoming an artist, Khan’s visuals focus on the minute details of things and their construction. Using acrylic and chamak patti to construct his visuals, the artist applies multiple dots to construct various pixelated screens. Not only did the artist use an interesting colour palette but there is also a balance in his visuals, with the viewer’s eyes moving all over his work.

Taking the works of all the four artists into consideration, the elements of architecture and repetition are definitely a commonality in their works but also, the use of diverse mediums add to the strength of each artist’s work. The artists have not only addressed their individual concerns but they have also designed their work in a way that engages and leaves viewers to their own perception, taking the clever use of mediums and the created patterns into consideration.