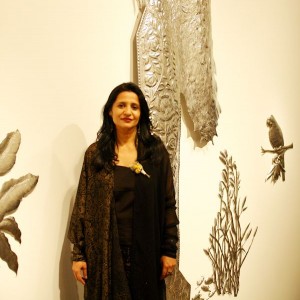 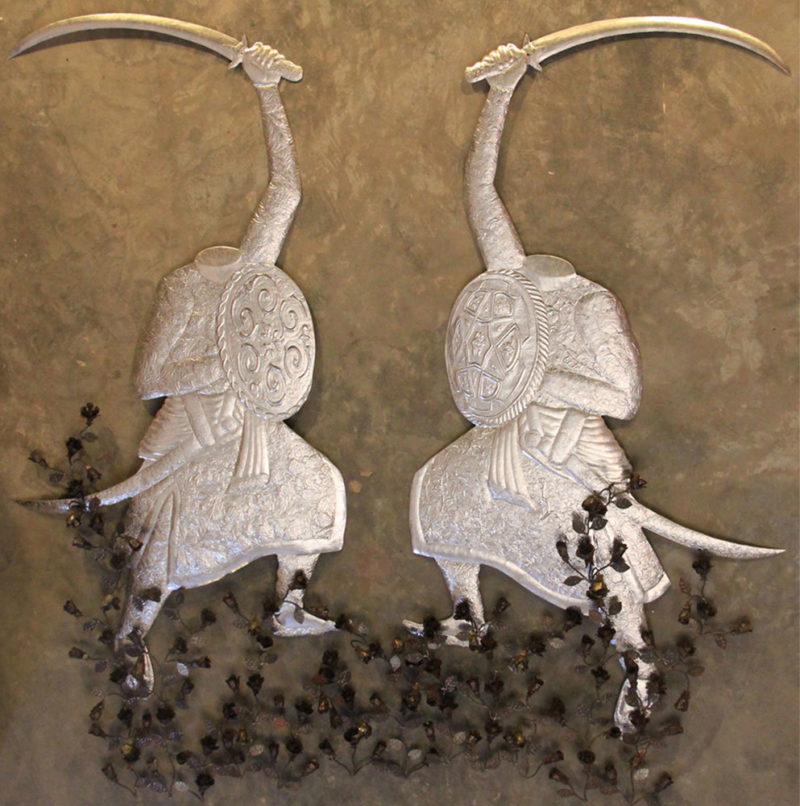 The Politics of Annihilation – Adeela Suleman

As the narratives of brutality, apprehension and danger, woven into Karachi’s fabric are dwelled upon; it is not difficult to imagine that the citizens of the city may be rendered numb, existing within a shell of wearisome surrender. As episodes of violence persist, consciousness and hope erode. The limpidness of feeling and emotion may therefore retreat into a quiescent realm, lying in wait.

Adeela Suleman accesses this subconscious universe, perusing labyrinths of conflict and contradiction for truths that underscore the fragile politics of existence, within both intimate and public spheres. Within her oeuvre, stainless-steel objects and their material shift and metamorphose, as they undergo symbolic processes of transformation. Reworked within a contemporary context, the totemic artworks transmit messages of endurance, ruin and ephemerality, as personal and political histories are referenced. A variety of interpretations emerge, as Suleman contemplates the wondrous complexity of humankind, and the manners in which they occupy a tempestuous, destructive and agitated society.

The artist was born in 1970, in Karachi, Pakistan. As the nature of sculpture is regarded within Suleman’s practice, it isn’t a surprise that the experiences of object-making were customary in the artist’s household. In addition to having attended art and craft classes from an early age, Suleman acquired a vast variety of inventive skills from her grandmother, including stitching, cooking and embroidery. As the artist recalls her great grandfather carving and fashioning objects out of wood and selling them at the Kumbh Mela (a significant Hindu pilgrimage and festival) in India, she acknowledges the processes of object-making as inherent, passed down through generations in her family.

Majoring in sculpture, Suleman received a Bachelor’s in Fine Art from the Indus Valley School of Art and Architecture (1999) and proceeded to graduate with a distinction. Prior to this, she pursued a Master’s in International Relations from the University of Karachi (1995). The volatile, politically charged atmosphere of Karachi University’s campus had a fervent effect on the artist, whilst the intensive study endowed her with an intimate and pragmatic understanding of politics. For Suleman, the forces of art and life are profoundly interconnected. As the events and occurrences of the everyday crystallize within her visual language, the knowledge of art finds place within her quotidian existence.

Investigating the power that emanates from three-dimensional art objects, and their dialogic interplay with the audience, as they both reside in the same physical space, the artist acknowledges the potential of sculptural form. Relationships built with the artwork are dynamic, as aesthetic connections with the physical surface give way to an intellectual engagement with the form. Materiality transcends mere physical matter, as it encapsulates the historical, cultural and temporal information of both the material and the artist’s personal process. Witnessing the natural evolution of Suleman’s artistic trajectory, the surface of stainless steel in particular, has been stretched, reworked, beaten, and twisted into dreamlike, disconcerting forms that orbit within conceptual territory, channeling ideas of menace, war and identity.

One of the artist’s earliest projects includes the Salma, Sitara, and Sister – Motorcycle Workshop (2002). Displayed at the CP Biennale (Jakarta, Indonesia) in 2005, the work encompassed ornate helmets, a footrest and film. Observing the living theatre of the motorcycle within a localized, Pakistani context, Suleman draws from the familial journeys that take place on the back of the vehicle. A cyclical performance, the intricate balancing act of a women positioned side-saddle, the helmet-clad husband and a number of small children squeezed in between, demonstrates the perilous conditions frequently undertaken by the lower-middle class. Traditionally, women have been coerced to travel seated side-saddle, an act that denotes their modesty. The woman on the motorbike sits with her legs shut tight, with no means to achieve control of the machine she rides daily. Her presence never extends beyond that of a passenger, as she remains at the mercy of the rider steering the vehicle.

Constructed and reassembled from a variety of kitchen utensils and utility items, Suleman’s helmets cross-examine the subjective notions of safety, function and femininity. As the nuances of systemic patriarchy are considered, it oft occurs that methods of surveillance and excessive control, parading as faux measures of security, are exercised over the womenfolk. As their autonomy is ruptured, their fundamental safety is compromised. Bright and gaudy, gleaming with the shine of mundane kitchen paraphernalia, the helmets may act as objects of folly, jeering at the deceit imbedded within false ideas of protection. Rather than functioning as a shield, the ornamental gear invites constriction and rigidity, and beckons to a domestic sphere of housecraft, where most women are situated with or against their will. As the harsh humor of the helmets cast light on the conflicting boundaries between protection and restriction, they perform as refractive devices, through which the politics of curtailment, gender and forced identity may be comprehended.

Suleman’s quasi-magic processes of change and alteration probe the borders between the artwork’s constructed and utilitarian reality. Through distortion, new and elevated truths are revealed. Within the group show, The Emperor’s New Clothes at Talwar Gallery (New York, USA) in 2009, the artist showcased a number of skeletal undergarment and corset like forms, fashioned out of steel tongs, spoons and other metal equipment. Titled with quintessential, female names including Asma and Sultana, they simultaneously elicit memories of cage bars and spinal bones. The narratives of intimate, feminine attire and their contradictory functions are appraised by Suleman. Do they secure or stifle? The pieces may embody the experiences of cultural constraint, hammered by force into most women’s existences. This in turn, may gesture to the intricacy of their being, which lingers beyond the reductive notions of gender essentialism.

The artist further re-contextualizes found objects within her solo exhibition, Dreams of Carnage at Canvas Gallery (Karachi, Pakistan) in 2015. Always operating from a point of consciousness, Suleman views her work as biographical, imbibed with the spirit of her environment. Rooted within Karachi’s inherent turbulence, the artist extracts the residue of savagery and slaughter, imbedded in the cracks of buildings and the memories of people. A series of plates depict an abstract body of water. Whimsical blues gradate towards milky-pink and eventually blood crimson. Serving images of death like delicacies on ceramic dishes, the artist’s fascination with the voyeuristic consumption of violence comes into play. Following the pervasive trajectory of bloodshed, Suleman underscores the taint and tarnish of reason, hope and justice, which cannot be scrubbed away, or forgotten.

Similarly, in the artist’s solo show Not Everyone’s Heaven at Aicon Gallery (New York, USA) in 2017, metal cleavers, painted with enamel scenes of pastoral idyll resonate with the undercurrents of destruction. Like weaponized portals to a paradisiacal realm, reverie warps into nightmare, as it is realized that every cherished space is polluted with peril.

As the sociocultural, political and intimate narratives of the everyday seep into Suleman’s practice, she in turn passes on her knowledge to others. For several years the artist served as an Associate Professor and Head of the Fine Art Department at the Indus Valley School of Art and Architecture, mentoring and educating her students on the infinite possibilities of contemporary art practice.  Suleman is also the founding member and Director of Vasl Artists’ Association, a platform dedicated to extending artistic dialogue and discourse. Affiliated with the Triangle Network (UK), artist residencies are regularly hosted within the space, as visual expression and experimentation is facilitated. Cross cultural exchange is fostered, as artists around the world are invited to come and work in Karachi. The organization is also devoted to the support of local, emerging artists.

The skin of metal is rendered near sentient within Suleman’s piece; After all, it’s Always Somebody Else Who Dies (2017), displayed at a group show at the 4A Centre of Contemporary Asian Art (Sydney, Australia). A geometric symphony of silver, hammered birds falls within a sheath-like curtain. At second glance, the birds appear as guns. In retaliation to the countless lives lost through ideological disputes and political violence, the artist endeavored to count the number of fatalities, and thus memorialize them each through the symbol of a fallen sparrow. As the number of the deceased multiplied exponentially, Suleman was unable to keep count, a tragic reminder of the vast array of faceless victims we will never hear about. Weaving chaos into symmetry, the artist blows aside the dust of apathy and impels us to mourn, and to remember. The birds mirror each other in mutual catastrophe, as the web of their terminated flights remind us of those who may be remembered by their loved ones, but are forgotten by the rest of the world.

The dead are also remembered through Suleman’s work for KB19, the second edition of the Karachi Biennale. Tragically vandalized and destroyed by alleged law enforcement agencies clad in civilian garb, the project Killing Fields of Karachi (2019), investigates the man made marks of violence, imprinted within landscape. In the past, Rao Anwar served as the Senior Superintendent of Police in Karachi for over three decades. Currently placed 18th on the US list of ‘human rights abusers’, the policeman has been accused of conducting extrajudicial, encounter killings, one of his victims including Naqeebullah Mehsud, an aspiring, Pashtun model and shopkeeper. The project included an installation of 444 tombstones, commemorating Anwar’s victims, as well as a video documentary encompassing the tragic narrative of Mehsud. As the cloak of savagery is pulled aside, only death is revealed. Steel foliage in varying forms bloom miraculously through stone, flourishing without soil or water, a tribute to those departed.

Suleman further investigates the cycles of decimation and massacre through her installation for Art Dubai 2020 (currently postponed due to the COVID-19 pandemic). The wrath of thundering, martial elephants and the duels of headless warriors are witnessed through a panoramic battle of copper and brass. With the marked absence of geography and civilization, the combat appears to transpire within an abstract plane of existence. The artist examines the voyages of war narratives. Tales of annihilation shed the traces of environment, latitude and longitude, as they travel with the passage of time. Only violence is perpetual. As identities are erased through decapitation, Suleman underscores an eternal and universal war, ingrained within human experience. Like vagrant phantoms, the dismembered soldiers battle on. There is no escape, even in death, as conflict travels through generations.

Suleman’s artworks embody the philosophy of conflict. The war between citizen and city, the grotesque and the beautiful, wish and culture, form and function, mutilation and ornament, dream and truth, pleasure and pain. As the years passed swiftly, the playful, the humorous and the absurd slowly vanished from the artist’s visual vocabulary, as the excruciating and macabre truths left behind echo with the muffled voices of the dead. Despite traversing local experiences and events, Suleman channels a globalized view, as the experience, performance and memory of violence transcends borders and nationalities. Her work may thus be perceived to exist within limbo, a fictive realm of nothingness, and may therefore possess the ability to inhabit multiple worlds at once. Functioning as vessels in hues of silver and rust, the artworks absorb narratives of fear and trauma, as they cast light on the futility of war and the transience of life.