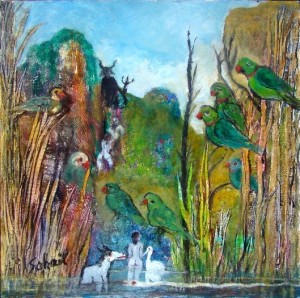 Tassaduq Sohail, 85, is one of Pakistan’s finest artists. He is also a storyteller, a lover, and has an insatiable taste for the flaming obscene. He shared a story with me: on one of his visits to Sony Sweets in Karachi, he saw a beautiful, young girl who offered to open the door for him. He was so enamored by her beauty that he went home and made a painting of their encounter. In his painting, however, he carried that encounter further, making it into a full dream sequence.
This piece of writing takes inspiration from Tassaduq Sohail’s method and is my dream sequence of an encounter that I had with the artist.

Dream I – Between Artist and Woman
His life could make a great film – beautiful women, and so very many of them, a small apartment that is home to numerous cats, aging eagles and other unknown pets spoilt on chicken livers cooked at 2 am every morning, backstabbing commercial artists and art gallery owners, St. Martin’s School of Art, Karachi by the sea, court cases by the grace of god, an intimate affliction with Picasso’s dictates on art, former army generals among his patrons, and many more garish details ceaselessly throng the mind.
In conversations on loyalty, sexuality, love, Tassaduq Sohail is a storm that strikes down hard at the center of all civilized ways of life. Men, he claims, don’t know how to love. Commitment, loyalty, constraint and piety, are all social constructs to imprison nature’s ways and inhibit real love. A man’s real love is the worship of women, he says. He worships women and he worships them all the time, particularly those who enjoy his artwork. Unless he is performing love, he cannot paint.
When I strain my own empathic and rational faculties to understand the relationship between an artist and his or her muse, I don’t get very far. Naturally, as a feminist and a woman, my brain and each atom of my being fires up at the thought of men putting women on pedestals of beauty, elegance and desire, which can be so unrepresentative and oppressive of the experience of being a woman. There is no one kind of woman and there is no one kind of beauty, elegance, desire or strength associated with all women. Yet, when I look at his paintings, I lose some of my steam because I find a harmless, engaging story in them.
Women in his paintings are his dreams. Their eyes tell stories of their fears and desires, their naked backsides protrude out at bearded men, they exist as beautiful fixtures in a breathtaking landscape that is unadulterated by the laws of (bearded and political) men. He dreams of women in one shape, the same curves, lips, sometimes even the same faces. Men are the same, too, interestingly; the same beards, same eyes, though never the body. Maybe, in essence, they’re all the same to him. Or maybe, in dreams everyone is essentialised.

Dream II – Between Artist and Art
I don’t understand why Pakistani artists paint The Last Supper. Tassaduq Sohail tells me he has produced a whole series of paintings on The Last Supper because an army general – one of his patrons – had commissioned him to make one. But each time he made a painting, it was sold before the general could get a hold of it. I am lucky, I get to see the latest one right after Tassaduq has finished painting it, his fingernails filled by the green in the trees arching over Jesus and his followers.
What drives an artist and art patron to desire such a painting in Pakistan? Perhaps it’s our society’s fear for our growing Pure and Virtuous who have Awakened post bruised betrayals of the Western dream. Or maybe it is our society’s cognitive predilection for impending political doom. Of course, the idea of the Western Dream, like any other dream, is entirely obscene in that it renders the dreamer too much power to construct and control the reality of the dream. Perhaps our Awakened Pure and Virtuous too have a similar power because they have popularly occupied the Western Dream, reconstituted it as a fundamental opposite, and therefore identified and divided the existence of heaven’s righteous and, well, hell’s rest.

Tassaq Sohail
“This world is heaven.” Tassaduq Sohail’s paintings reflect his faith. In tones, textures, hues of wonder, mystique, pleasure, exploitation, peace, cacophony, he juxtaposes paradise and its hell. A naked woman’s body becomes resistance to the forces of control and oppression. Nature and its origins, elements, power, become the truth no one wants to face. My dreams are more real than the reality you know, he tells me.
But I am not entirely convinced. His paintings tell the truth, and that he is the true artist, but whose truth is it and to whom is it told exactly?
In emphatic, fist-slams on the table at which we are sitting, Sohail denounces Rothko as an Ulloo Ka Pathawho just painted walls in shades of blue, pink, red, and bastardized art as that which could mean anything or nothing. (He said the same for Andy Warhol, but I have to say the Monroe didn’t really do it for me.) The reason why Rothko would do such a thing, apparently, is because he was given a lot of money to make art and then claim it as art. “Real Art lingers on; it festers, grows, surprises the viewer’s mind with new manifestations of meaning or truth through time.”
I ask him why then does he paint for money and for the same elite clientele as Rothko did. Art has always been for the elite, he needs money to love and survive, and unlike Rothko and other present-day artists in Pakistan, he paints dil se.

Dream III – Between Artist and Activist
There is little to say of Tassaduq Sohail in this dream because it is mine. I was working in Abbas Town with an inspiring group of young activists called Humanitarian Response Karachi when I met Tassaduq Sohail. His paintings, words, dreams and desires seemed unbelievable at best and inhumane at worst, given the crises that Karachi is continuously faced with. Dreaming – lasciviously or heroically or horrifically or hopefully – is a response to the present waking life and perhaps an important response because it reveals the truth brewing in us all. I am reminded of James Baldwin’s wonderful words at this thought. Let these words be the opening of all our dreams:
“Societies may never know it, but the war of an artist with his society is a lover’s war and he does, at his best, what lovers do, which is to reveal the beloved to himself, and, with that revelation, to make freedom real.”
Ayesha Omer is an artist and educator based in Karachi. Her work addresses issues of public formation, social marginalization and art activism.