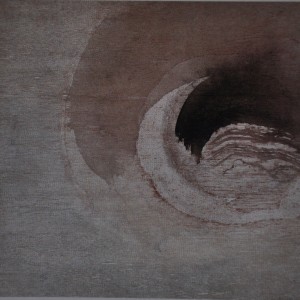 For centuries, visual artists (painters, printmakers, sculptors, draughtsmen, architects) have been known to hold a parallel practice, alongside their primary field of excellence and fame, in another genre, category or field of expression. Whether these parallel practices overlapped, intertwined, influenced, supported or inspired each other, or just lay adjacent to each other like strange bedfellows, is open to conjecture and inquiry. The question, however, as to what propelled these creative souls to indulge in another field, remains unanswered.

In some cases the two parallel practices may be diametrically opposed to each other (such as medicine and writing in Dr Enver Sajjad’s case, or acting and writing in Meena Kumari’s case) or they may feed off each other (as in the case of Sadequain, M.F. Hussain, Anwar Maqsood, Rasheed Araeen, Rasheed Arshad, Tassadaq Sohail, and many others). While one may be a mirror image or illustration of the other, more often than not, practice in one field supports and encourages practice in the auxiliary field, and, therefore, helps articulate artistic concerns more emphatically. On another note, one may aspire to dabble in another field of interest in quest of one’s true métier, bored by the drudgery of routine, or one may not be satisfied with one’s habitué vocation and would eventually retire to another field. The risk of wearing the label of an ingénue, a dilettante, a parvenu or an upstart on one’s sleeve would hound the practice, nevertheless, depending largely on the reputation that the artistic output merits or the level of accomplishment one achieves in either. This is not to overlook the rare case of ‘closet’ painters and writers who are better known for ‘something’ else, and whose hidden talents are often unveiled posthumously by their biographers. Add to that the so-called ‘all-rounders’: filmmaker, producer, songwriter and poet par excellence, Gulzar. Or the actor, filmmaker, producer and fashion designer, Muzaffar Ali. However, to excel in both practices simultaneously and correspondingly is a rare treat.

Henri Cartier-Bresson, the renowned Magnum photographer from France, took to drawing and painting in later years, devoting himself entirely to the ‘new’ genre. “I was once present at a lecture that Eugene Smith gave to some students at a school of photography. At the end, they protested because he had made no mention of photography but had spoken the whole time about music. He calmed them down by saying that what was valid for one was valid for the other. They were flabbergasted.”

The affirmation that there is no aesthetic peculiar to photography amounts to declaring the profound unity of all artistic practices. There is certainly a unity between the visual arts, which appeal to the same sense and have a common geometry; in the same way that music also obeys laws linked to mathematics. To Cartier-Bresson, there was no way of looking that is peculiar to photography or to drawing, but a culture of intuition and sensibility, which depends as much on a sense of form and geometry as on the intelligence of human beings.

In drawing, it is the hand that creates the forms and movement, while in photography the direction of this encounter with forms and movement is reversed. For this reason there is no hierarchy for drawing and photography. Incapable of drawing from the imagination, the most commonly practiced kind, Henri Cartier-Bresson adhered resolutely to drawing from sight, to drawing in accordance with perception, before the motif, superlatively introduced by the masters, supreme references re-established in an inflexible manner by Cezanne, who, eyes vigilant, set himself the task of penetrating what he saw before him, with no intellectual or sentimental deviation.

There are practitioners whose parallel practices complement each other so much so that one appears to be a reflection of the other. Whether it is the long poem or the suite of paintings, Raja Changez Sultan’s ‘The Himalayan Odyssey’ makes images of the high Himalayas swim before your eyes in the manner of a kaleidoscope. Glistening streams, brooding forests, and glens build a powerful imagery – a veritable armchair odyssey into the magical remoteness of the world’s tallest peaks. It is still possible to retreat for a while into the peace and quiet of a monastery, or to undertake a pilgrimage. And elsewhere in the world there do exist, even now, oases of sanity, places where ideas are still welcomed and the fundamental questions of life are being addressed. They are not merely repositories of old ideas, but breeding grounds of civilisation and humanity. One of these rare places is the Himalayan mountain zone. It is set high above the earth, like an altar. It is both a sanctuary to retreat to, and a holy place.On a similar note, it is difficult to say precisely what influenced Kahlil Gibran, the painter, the poet, and the novelist. The ‘metaphysical’ aspect of his drawings showed in his choice of figures – Christ-like heads, winged angels, and so on – but also in a certain wistful quality, as if expressing nostalgia for that transcendent realm to which his writings alluded. And he had already adopted the technique of placing in the background of his drawings vague ectoplasmic figures, often female, to hint at the further dimensions of supernatural life. The picture, which most completely prefigured Gibran’s work, was Jean Delville’s ‘Love of Souls’, which is, of course, itself reminiscent of certain works of William Blake, such as ‘The Reunion of the Soul and the Body’. In Gibran’s middle period, however, misty outlines would come to be the dominant influence. It seems to have been a convention of the times to use a veil of mist as a symbol for the dim access the normal mind has to higher worlds, and Gibran was constantly striving to communicate a sense of these transcendental realms.

Whereas Ram Kumar, the painter, has overshadowed Ram Kumar, the storyteller, yet he is an important writer in his own right. There are some junctures, though, where they meet as if theirs were two different paths traversed by the same person simultaneously. But every once in a while, Ram Kumar takes leave of one to come back to the other.

Kumar began writing stories much earlier than he took to painting. Has the painter Ram Kumar influenced the storyteller Ram Kumar? I believe, he has. His painterly sensibility is quite evident in his writing – it is there in his restrained descriptions of rain, wind, sun, rooms, etc. But one doesn’t remember his paintings while reading his short stories. They are about another world. On the surface, Kumar’s stories appear to be deceptively straightforward, unstructured, and easily decipherable. But as we come closer to them, we are disturbed by the silence left between the lines. Their multi-layered tensions wait to be revealed with every successive reading. In a haunting story, Sookhi Dhara, for instance, the life of an old woman is depicted after she loses her grown-up son in an accident. It is as if Ram Kumar lives a double life in his fictional world.

Ram Kumar may have done some figurative work in the early years, but it is the ‘abstract’ that makes up for a large body of his work. In his short stories, Kumar may weave very fine and subtle threads, but he never allows his narrative to go abstract. He does not allow any extravagant gesture either in his paintings or in his writings. A patient, controlled discipline, a pensive reflectiveness is at work in both of them and it is only here that the painter and the storyteller meet.

Likewise, Moeen Faruqi, a painter and a poet, doesn’t think that the two parallel practices have anything to do in terms of supporting one another. “Of course, the two are interlinked because an author has a style, a certain viewpoint, which is reflected in both. But they also stand apart as independent desires that demand to be practiced individually”.

“I’ve always been interested in both the media equally, and till my early twenties, I couldn’t decide if I should take a plunge into writing or painting. Eventually, I decided in favour of painting, but, of course, writing never quite left me. However, in my case, it comes sporadically, and is limited to poetry. If I were to compare the two practices, my painting is narrative in nature while my poems are more visual bereft of a story. I really enjoy conjuring up visual imagery with the help of words, may be because painting is such a strong visual medium already that I tend to take it towards narration. It may also have to do with the fact that I have not experimented enough in either. I have made abstract paintings but, in my opinion, the endeavor is not resolved enough to be exhibited publicly. Similarly, I haven’t tried my hand at short story writing or at longer fiction. What I can say is that many of my poems like most of my paintings address urban alienation”.

“I must admit that it is by no deliberate choice that I tend to gravitate towards painters who also write. I love poetry that works on several different levels. Pablo Neruda, Seamus Heaney and Ted Hughes move me to no end. I enjoy their manipulation of language, their ability to come up with new phrases, and, above all, the rhythm and music in their verse. Faiz is an awesome poet, in a league of his own. His poems from the prison are haunting – they speak to me about alienation without losing hope”.

“At the moment, I am deeply into Zen poets for their simplicity, their concrete visual imagery, and their intimate connection with nature. They have taught me to pare down, reduce and simplify, and reach out to the spiritual core in things”.

Finding solace in the Zen, with his philosophical bend of mind and a devout faith in Buddhism, Satish Gupta, painter and Haiku poet, is able to experience and express moments of divine silence and inner joy. It is the holistic approach to art that gives his creativity that special edge. The Zen artist looks up to nature in its purest form and humanity in its primal existence for his inspiration. The broad brushstrokes of the artist’s journey seem to run parallel to his encounters in life.

Interested in poetry and text and a fine calligrapher, Gupta’s writings mostly in Sufi spirit are often accompanied by stark and minimalist images of nature with its flora and fauna mostly in an abstract form, be they mountains, trees, birds, rivers, clouds, moon, budding shoots, lotus or other flowers. His calligraphic work, finely rendered with a Zen-like discipline adorns a pristine look. Whether it’s ‘I Am the Dewdrop, I Am the Ocean’ or ‘Sandstorm’ or ‘Eyes of the Thar’, Satish Gupta’s writing like much of his creative imagery comes in a heady mix of the spontaneous and the cultivated. Life came full circle for Gupta with the series ‘Transformation’ where we see his creative arena shift from the more figurative to spiritual work as he goes back into time to his travel experiences through Sikkim, Nepal, Bhutan, Andaman Islands, Laddakh, Sri Lanka and Cambodia. The work is about wisdom and compassion, and about the spiritual and the physical – a theme that is recurrent in his artistic voyage including ‘The Cosmic Matrix’ as he continues to draw, paint, sculpt and write reflecting on life and its essence with a multilinear openness.

No newspapers,
Today’s news
–  A fresh moon
In water