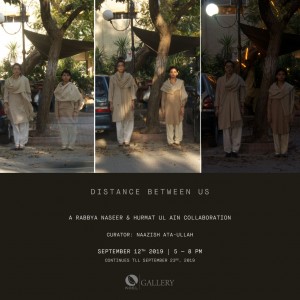 Koel Gallery’s upcoming show, ‘Distance between Us’, opened on the September 12th, 2019.

It displayed collaborative works of two interdisciplinary artists Hurmat Ul Ain and Rabbya Naseer, who are known for working in a variety of practices which are mostly performative in nature. Their work was directed towards exploring their attraction for the body as well as addressing other concerns like gender and food.

Some of the works, in this exhibition, like ‘Misunderstandings’ and ‘In a State of Constant Doubt’, stood out due to their placements and the stark white spaces which were repeated and interlaced through these works. The concept of love is investigated by using a series of graphite drawings, consisting of monochromatic shapes and motifs, which were used to represent intimacy and affection. Additionally, the works comprised of prints on paper, and videos that showed two women standing on a street.

This exhibition will continue till September 23rd 2019.