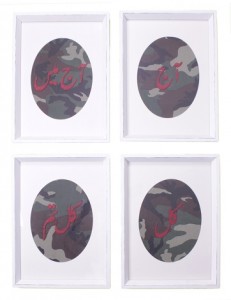 The Story Must Go On’ exhibited from the 23rd to the 31st of October at Koel Gallery and featured three contemporary artists all hailing from the same whirlwind of a city – Karachi. Their work collectively narrates a storyline defined by the resilient nature of a city’s inhabitants.

Salman Hassan’s work is an ode to the late Ussman Ghauri; there is no mistaking the influence of his mentor’s style and subject choice in the series titled Departure. Invoking Ghauri’s symbolic fish, text and the use of printmaking techniques, the pieces make a befitting tribute to the man who helped him during his years as a student.

Hassan’s Untitled series consists of three separately framed visuals in a monochromatic scheme with a hint of blue in one. Overlapping text with a wave like quality, his imagery features water, which is often associated with a calm and soothing feeling. In Hassan’s work, however, it has a rather turbulent, restless feel that one can relate to on various levels. His pieces are all extensions of one another, a visual play of swatches of color, drifting text and fish, recurring in various sizes.

Fatima Munir’s pieces are a succession of needlework on army fatigue cloth. She uses the camouflage as a means of masking her day-to-day fears and struggles while residing and raising her family in as volatile a place as Karachi. About her use of needlework, Munir says: “Needlework was taught to me as a technique to harness my childhood energy, bring calm in my home and teach me patience. All the things I need to survive every day here.”

Her use of text sends out a powerful message on the prevailing conditions in the city. Aaj Main, Kal Tum translates to Today Me, Tomorrow You. Munir wants viewers to build their own association with her work, to reflect on how they feel about their current living conditions, urging them subtly to take a stand. The whole notion of a country so desensitized to its turbulent existence is something Munir has a hard time grasping. By placing her own fears and concerns for all to see in a public space, she uses her art to reinstate awareness amongst people.

I Still Love You, written in Urdu script is a message to the city that, regardless of all the anxiety and frustration it create, she has still found in her to love, much like the everlasting bond a mother and child share, a city which she feels is the “heartbeat of a nation in dire political turmoil”.

Hungami Halaat reads as “We are all in this together”. Munir’s use of red thread signifies that even though she tries to hide her fears, they still manage to escape her attempts at normalcy.

S.M. Raza focuses on the concrete jungle that the city has developed into, where each individual exists parallel to another, indulging in the monotony of everyday life; a city whose dwellers as a safety precaution have put up boundaries and limitations on human interaction. He says: “We’ve boxed ourselves in, there’s a sense of loneliness and exhaustion in the air. We’re a part of the rat race, not knowing when to stop and take in the essence of nature. The simple things don’t matter anymore.”

Raza, who lives in one of the many apartment buildings in Clifton, is perplexed by the thought of thousands of individuals living side-by-side yet never getting to know one another. His piece Blocks, digital painting on paper, are what he calls “small windows into different lives”. He employs a dull green background, which signifies the glow of artificial lights often seen in professional work places. The same theme in a different light is executed in his series I Am Alive, but in a different medium, using acrylics.

Saraab, which means ‘mirage’ is a diptych: in one panel there is a repetitive pattern of apartment blocks with hints of colors, in the other, there is a digitally altered image of land and sea from which Raza has made a conscious effort to erase all signs of manmade structures.

Stemming from personal experiences and different viewpoints, the show is not just aesthetically driven, but links some of the different facets of society, weaving them together to form a broader picture.

‘The Story Must Go On’ was on view from 23-31 October at Koel Gallery, Karachi.

Aniqa Imran graduated from Indus Valley in 2012 with a Bachelor’s in Fine Art and is currently working for the Foundation for Museum of Modern Art in Karachi.