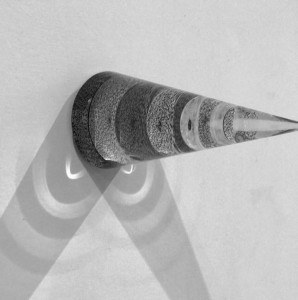 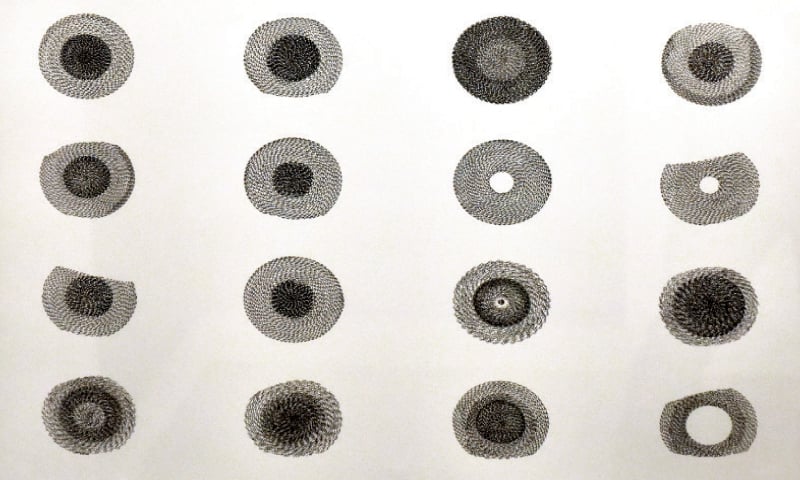 Tazeen Qayyum’s recently concluded show at Canvas Gallery titled Descent traces the human capacity for moral retribution, resting within a quivering space between the tangible and the intangible, Qayyums’s work profoundly resonates with the visual resonance of dikhr. The works, while spatially finite reckon with the persistence of thought, viscerally illustrating the infinite. A chasm inscribed with words that string into one another. Fluid, almost porous in their ability to incant and enable a resonance. The power and sincerity of repetition painstakingly rendered in centric forms, coaxing the delirious probabilities of sacred shapes. Words resting like hyms in formations. On it’s own the word resigns into a state of coherence, but strung together it fashions into a powerful resurrection of aiding an infinite thought. Still coherent, but it sits in a valorized state of continuity.

Qayyum’s work becomes a tactile mediation between the body and the integrity of thought. It renders the labour into a profound state of retribution. She allows her body to become the vessel to meditate through. The posture she assumes, the way her body furls and unfurls, her steady hand all condense into a state of ritualized verbatim. Qayumm’s performative piece titled Amal(Act) II-Tauba invokes the intangibility of a conceptual and spiritual entity performed through a display of repetitive labour. She silently etches, the length of her body and arms positioned to create and meditate. Repeating the word Tauba. A word rooted in repentance, yearning, self-absolution, submission..she enables her body to contort and speak a language of it’s own, as she moves along the surface in silent admission.

The structural symmetry of her work exercised though a mindful submission becomes a poetic vessel to articulate the sensory vigilance of devotion. Her choice of words foster the affirmation of transcendental ideas; Aadat (Habit), Ibadat (Submission), Farz (Obligation/Pressumption)..gesture towards a state of spiritual yearning. The forms she creates with these words look like feathered orbs strung with incantations, ruffled to a state of delicate modesty, pulsating in their stagnant state as the eye slips through the curves of the words. The intimate relationship between thought and language also forms, as we curve down the spines of alphabet knowing that language too is a mere illustration. But the thought in itself, rooted in a state of auspicious submission materializes into a tangible state of being.

In a carefully arranged sea of words, strung into mobility by the dispensation of their persistent thought, one finds an agility; a symmetry in conflict with the asymmetry of human agencies, the creation of visual language and the vehicle of thought consorted into a state of harmonious permanence.

In her work Salai, which is a needle like form protruding through the forms, transparent and layered with sentiments of remembrance, one finds a moments of mystique as they peek into the world she created, animated through the reverberation of transcendental thought.

The divine invocation in her words renders the the work to rest in a state of symphonic austerity. One might fall into her infinite mandalas, feathered by the edges of the alphabets, stroked by the intangibility of the divine accolade. But perhaps through Qayyum’s video titled Blur in which she erases and applies kohl repeatedly, confronts the audience in a different manner. She is still using her body to perform a repetitive craft, but it exists in a conflict to the sentiment of unabashed devotion, perhaps that is why it resonates on a completely different octave. It confronts the human, it resigns the aspirational state of martyrdom into a cyclical state of vanity. Albeit vanity may be appear a bit misconstrued, however it resided in a state of human experience not attributing to the divine. It follows the repetition and cyclical motion of her other works but it functions in a completely different manner. It fosters the conflicting states of the human. In her other works she allows her body to become a vessel for endurance in order to achieve a state of performative dhikr. However in Blur she used her body and allows it to endure however the act isn’t rooted in spiritual aspiration, it is grounded in a state of human experience. The kohl, an instrument of beauty, a primitive cosmetic that has endured centuries, usage of it has been recorded to prehistoric times, becomes an alluring medium. Blur in juxtaposition with the rest of works allows one to take a seismic sigh as one is allowed to experience the human as a pluralistic entity. One that doesn’t feel constantly indebted to the universe, one that doesn’t constantly align his moral compass..one that may destruct in order to experience beauty, one that doesn’t constantly question the temporal and the permanent. One that feels deliriously human in all states of being.

Qayyum’s work was act of prolific thought consummated through a poignant ritual performed by the body; the mind and body ceremoniously engaged in a reverberant state.

One Response to Descent