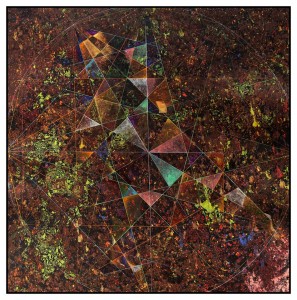 It is a well-known fact that geometry can be found in every single matter in the universe, from minuscule particles, atoms, cells, molecules to the outer reaches of space; every tiny piece follows geometrical archetypes which underlay the principle of oneness. This paradigm of unity reveals to us similar forms in nature to an esoteric level where we can truly say we are all connected to this world in every possible existing pattern. In many of the works by Shireen Bano, we can see the correlation of these patterns and the play with color. They suggest a unique reciprocity of geometry with nature, with light, with spirituality and simply with the idea that oneness truly lies at the heart of her work.

In the painting titled ‘The Bond,’ the use of organic colors and shades suspended in a timeless space suggests the implications of a dimension beyond the human eye, yet the existence of the geometric patterns is a clear sign of its connection to this reality. The intersection of two circles at their exact center is symbolic in its meaning, known as a ‘Vesica pisis’ where the center represents the common ground or shared vision between two equal individuals. Since time immemorial we can adequately say that geometry has been a constructive anchor for artists across time and space.

Works such as The Vitruvian man by Leonardo da Vinci is one example of the use of geometry to bring order to life and man’s ever confusing connection to it. The drawing itself is a representation of the proportional relationship which reflects universal design and it ensures a stable structure. These qualities are shared equally by God’s creation of the human body bringing us closer to the principles of spirituality i.e. the basis of this entire body of work. In the 21st century, spirituality has become an increasing part of the contemporary era of modern art, and has been incorporated in various academic disciplines and discourses. In Shireen Bano’s work, self-realization is the projected notion which she deems important in light of spirituality, and suggests the ever-important need for people to have an inward search into themselves. In his 1911 work, Kandinsky also emphasized his staunch belief in the redemptive qualities of the spiritual and was able to traverse the “the nightmare of materialism” to obtain self-realization through art. In contemporary culture, the connection between art and religion has been exchanged with the terms of art and spirituality, where the latter may encompass religion. This resonates with a more contemporary and global perspective and is a way of engaging viewers from various religious beliefs. In an issue of the contemporary art magazine Frieze on “Religion and Spirituality,” the term “religious” in reviews of contemporary exhibitions and accompanying press releases is used in favor of words such as ‘spiritual,’ ‘transcendent,’ ‘meditative,’ or ‘sublime,’ which gives the false perception that it is OK for artists to be ‘spiritual’ in some vague, modernist sort of way, but not ‘religious’—as if being ‘spiritual’ is somehow free of ideological baggage. However, despite such debates, the presence of the spiritual in art is not just restricted to artists, since long architecture has been one of the many forms used to represent spiritual spaces in many religions.

Buildings such as the Wazir Khan Mosque and the stained glass inside the Notre Dame use many forms of complex geometry. In the work titled ‘Manifestation’, the lines and shaded corners resemble an abstract construction similar to a drawing of a building. This is interesting because a lot of sacred geometry has been incorporated in Islamic architecture as it holds an important spiritual significance in Islam. The psychedelic nature of ‘muqarnas’ inside mosques such as the Jalil Khayat mosque in Iraq, also depict complex geometric patterns infinitely interwoven into each other. However, these complex patterns seem to embody a refusal to adhere strictly to the rules of geometry. As a matter of fact, geometric ornamentation in Islamic art suggests a remarkable amount of freedom; in its repetition and complexity, it offers the possibility of infinite growth. The floral mandala used in the paintings of Shireen, known as The Flower of Life, symbolizes creation and reminds us of the unity of everything which encapsulates our perceptions. A design proven that we are all built from the same blueprint. To sum up, the entire show was a transcending experience and a reminder of the presence of geometry as well as the spiritual in every fabric of life. In the contemporary world, spiritual art has its own impressions it leaves on the people. It changes minds, broadens understanding, and transforms our ways of seeing. It’s an avatar of the artists’ spiritual experi­ence, and its intention is to evoke the same in us. Such works are dynamic agents of the spiritual and indicate endless possibilities.