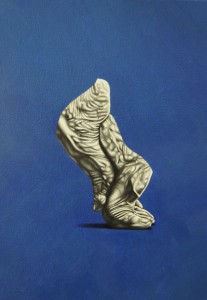 Daydreams of the Khaki Banda

A two man show was held at the famous Satrang Art gallery in Islamabad in the month of December 2018. The artists who exhibited their works were Scheherazad Junego and Naveen Shakil. Both talked about the dire need of soul searching for the human race which is a trait diminishing with passing time. What is special about their work both deal with concept of higher consciences depicted solely through the physical human form. The expression of the intrinsic value through physical form. Both scorn the societies follies in a aesthetically pleasing fashion. `They express their personal spiritual journey through art. The exhibition is titled :Temporary Facade”

Scheherazade’s work is unique because it catches the viewer off guard. While one admires  her immaculate skill and the beauty of the composition but upon closer look the interplay of the human body with animalesque character traits can be seen.The subtlety and beauty with which she depicts the metamorphoses is a bit unsettling. She is a cynic and a diplomat at the same times. She expresses her scorn to the society’s norm while taking care of the aesthetic elements of her creation. She scorns but scorns with eloquence. Her images are not devoid of beauty. Scheherazade’s critiques the society for judging individuality. How people put on facades and masks to fit in the crowd. She maintains “Often people want to emulate traits of other people around them. It is this search for perfection, control and balance which often ends in dehumanizing an individual. In todays world materialism has taken precedence over human qualities. Human beings are objectified to such a degree that objects have become an extension of different parts of the human existence in general. For instance shoes are an extension of human feet. Difference is that the foot is made by god and shoes are made by man. Humans are constantly trying to compete with the creator to  satiate his ego and deludes himself in believing that he is searching for some obscure sense of completion.”

Scheherazade depicts the dehumanized body by interplay of androgynous human body metomorphasizing into an eagle like anatomy. The anatomy is juxtaposed in a textured and white empty space devoid of any other object. In reference to this the artist maintains “I have used thick brush strokes and turpentine in the background of my canvases and add aesthetics to my empty space. The canvas is addressed as a psychological space and i have not added an inanimate object because i wanted the attention of the viewer to be completely focused on the interplay of the anatomy. The anatomy being porcelain like, android, alien and robotic.”

She further adds “ The reason why i have chosen eagle to represent the dehumanized man is because both man and eagles are an egotistical being. The eagles soars up in the sky- above the rest and looking down upon all entities down below.”

Scheherazade’s talks about a few of her pieces “The painting titled “Daydream” depicts a figure which resembles a female form is juxtaposed on the couch in such a way that both merge together as if they are one entity hence objectifying the body on top. Placed on the figure abdomen is the eagle skull which is executed in a very obscure fashion. The high heel shoes add a cynical touch for the peoples penchant for material objects. The figure has no face hence no identity.”

Calla Lilly depicts the feet painted in the most human fashion but the have been cut through as if amputated. A deconstruction of ornamentation.

In reference to the paintings titled “Inhuman” and “Inhuman 2” she maintains “ The back i have depicted in these images have a very  sexualized arch. The concept of a delicacy of a woman’s waist but the head has been cut off and there are eagles talons instead of hands. Hence the paradox between revulsion and attraction.

In “Quinate” Scheherazade Explains “ I wanted to create rotation and pattern of human figures. The comment is lack of value repetition has in day to day activities.” She has expressed this banality by using human anatomy but its dismembered effect and it constant repetition although aesthetically pleasing is unsettling.

Scheherazade’s work has a dark haunting beauty to it.

Naveen’s work talks to the viewer in ways that perhaps even the artist herself doesn’t realize. Her work is an interplay of deliberate, conscious self expression and the unconscious synchronisation of ideas in the search for a higher conscience. This interplay is felt in the artist’s work as well as the viewer. The work is layered and deals with the artist’s conscious urge for closure, which is also an intrinsic human need dealing with the universal unconsciousness as well. What the artist perhaps doesn’t realize is that through her personal creative quest she is actually expressing what is instinctive to human race in general.  Naveen’s work is inspired by the great Sufi poet, Bulleh Shah’s, poetry.

A mere human made of clay,

he lost himself completely to the ephemeral world

and does not ponder about his relationship with his lord.

Naveen talks about how she has given creative expression to her soul’s personal journey “I have used these sculptures to depict perhaps my own, and humanity’s empty perfection. They’re so perfectly immortalized yet hardened, in stark contrast in contrast to supple human flesh.”

What is striking is the comprehensive manner in which she talks about the journey of the soul by depicting it almost solely using the body or rather the physical human form. She uses no other object apart from the human body and a diagonal line running across the canvas (or through the depicted anatomy) for her lyrical and skilful expression of the immaterial. With reference to the diagonal lines running along almost all the compositions, the artist maintains “As an architect I have this need to construct space. Hence, I have constructed a space with enamel lines which are golden, black and white. Not only do they add aesthetic value to the canvas, but the colour gold represents divinity.”

But, to the viewer these lines present multiple interpretations which offer more than what Naveen verbalised. The diagonal lines running across the canvas represent a need for completion, symmetry and balance by the human soul. The line cutting across and through the human anatomy, may possibly be seen as the searing emotional pain and the awakening the initial stages of transformation bring. The storm after which comes the calming stillness of the emotional state.

Naveen’s pieces are melancholic and romantic. Naveen maintains ”My pieces have a bittersweet melancholy because from them resonates how meaningless the material world is.  Yet we are so deeply entrenched in it. Sadness of not searching ones soul. Souls that don’t know what their calling in life is. My paintings are romantic because I am very fatalistic and live by the idea that, although I am made of dust and will surely return to dust, yet during this journey, I have discovered my calling in life – creating art.”

The painting “Qazi” depicts faces which do not portray an individual, but a generic human face. This painting talks about the soul and the external form in portraiture. The front faces are very authoritarian and statuesque, and without eyes, just like the Qazi who preaches the do’s and don’ts of life.  Below is the portrait of a true soul that wants to break free.

“Inertia” is the dialogue of one’s soul with its physical vessel, anyone whose soul is awakening – a visual representation of the front and back side of human anatomy.

“Judaai” meaning separation, talks abut separation from the soul. The background of the canvas is pink giving it a feminine touch, this colour also ties in with the concept of yearning.

The sketch “Tempest” talks about the union between body and soul. The transformation that happens upon awakening, one senses the culmination of air, earth, fire and water.

The painting “Khaki Bunda”, which means Man made out of dust, has been created on the concept of Bulleh Shah’s words “Things will change when you change” . The “Khaki Bunda” is bowing down humbly and he is posing as though about to take flight.

Naveen uses pencil and graphite for sketching. On her canvases, she uses acrylic paints for the background, and oil to paint the physical forms to add to a lustrous quality to her juxtapositions. For murals, she employs external wall paints and spray paints.

Scheherzade Junejo graduated (BFA) from National College of Arts Lahore in 2010 and has participated  exhibitions at international and national levels.

Naveen Shakil is a self taught muralist, artist and graphic designer. Her work is a cocktail of  graphic, traditional and surreal art topped with a hint of street graffiti grunge. She graduated with a BS in Architecture in 2009, with a distinction from the University of Dundee, Scotland. She has worked with many prestigious architectural firms