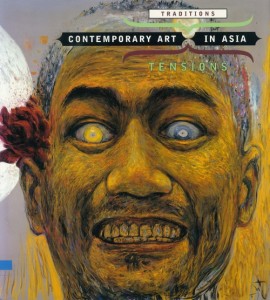 Contemporaries in the Corridors: Some Preliminary Thoughts…

Held across the Asia Society, the Grey Art Gallery and the Queens Museum in New York in 1996 the landmark exhibition ‘Contemporary Art in Asia:

Founded in 1954 by John D. Rockefeller III, a prominent New York philanthropist from a billionaire banking and oil family, the Asia Society began exhibiting art in 1960. While John Rockefeller III collected modern art, until ‘Traditions/Tensions’ the Asia Society had a policy of exhibiting only ‘classical’ and ‘traditional’ objects in its galleries. It was therefore up to the Asia Society’s separate ‘country councils’ to organize exhibitions of living artists, which were held outside the purview of the gallery programme and instead took place in the building’s auditoriums and event spaces.

Comprising of experts and enthusiasts of Asian countries including Pakistan, Korea, Malaysia, Thailand and India, the Asia Society’s ‘country councils’ received annual funds to organize lectures, events and roundtables within the Society. Often in conversation with organizations such as the United Nations a few blocks away, the councils were just one component of the Rockefeller family’s channeling of funds into projects that would, among other objectives, support North American and Western international alignments during the Cold War. Funding culture, healthcare, education, and so-called “liberal” American values and knowledge internationally, the Rockefeller Foundation is one of the most prominent formations of the cultural, economic and political battle for global hearts and minds that took place against a Cold War backdrop and North America’s ascent to global political dominance in the second half of the 20th century.

Among its activities in the 1960s, the Pakistan Council at the Asia Society organized lectures on architecture in Pakistan by Edward Durell Stone (designer of the Islamabad’s Presidential Palace and the Institute of Nuclear Science and Technology) to fundraising luncheons and film screenings. A combination of South Asian and (mostly North American) attendees, there is an earnest and collaborative tone to the Pakistan Council’s meeting minutes, which provide the majority of material I have so far obtained about the 1965 exhibition.[2] Gleaned from these documents we find that the show was held in the auditorium of the Asia Society, (then on 64th Street in a building designed by Philip Johnson and shared with the Japan Society until both institutions decamped to separate and bigger venues in the early 1980s). From East Pakistan the exhibition included artists Zainul Abedin, Aminul Islam, Kazi Abdul Baset, Qayyum Chowdhury, Quamrul Hassan, and Hamidur Rahman, best known for designing the iconic Shaheed Minar monument to the Bangladesh Language Movement in 1956. From West Pakistan the show included Abdur Rahman Chughtai, Sadequain, Jamil Naqsh, Sheikh Safdar, and Rumana Said, along with four paintings by Anwar Jalal Shemza from a collection then based in New York. Organizational support in Pakistan came from Shakir Ali, Jalaluddin Ahmed, and Syed Babar Ali, philanthropist and industrialist who contributed to the majority of the project’s shipping expenses and loaned four works to the show.

The exhibition opened later than expected, in November 1965. While a Spring opening had been intended, once the artworks that had been gathered for the show arrived at the Arts Council in Pakistan (presumably Karachi’s) from which they would then leave for shipping to New York, it was decided that such a good collection needed to be held in place for a local display, apparently visited by both the Shah of Iran and the President of Burma. In North America it was hoped that The Smithsonian Museum would organize a country-wide tour, but in the end it seems that the exhibition passed through only one more venue after the Asia Society, making a stop in Ottawa, Canada with support from the Pakistan High Commission in Canada.

Gleaned from an initial archival dig, this preliminary history is far from complete. However, important questions regarding the project’s curatorial intent are clear. Immediately noticeable is the frequent and striking use of the terms “contemporary art” and “contemporary artists” in the Pakistan Council’s meeting minutes. Although within everyday English “modern” and “contemporary” are interchangeable, when it comes to art that is less the case. 20th century art history is constructed around the notion that modern became contemporary art sometime around the 1970s, when traditional mediums such as painting and sculpture began to break down and merge into ‘contemporary’ formats such as installation art, conceptual art, appropriation art and video, for example. Signifying different artistic and historical periods, the terms modern and contemporary are complex and contentious. As art historian Richard Meyer describes, when the Institute of Modern Art in Boston changed its name to the Institute of Contemporary Art in 1948 a heated debate erupted within the North American art world regarding this choice, one that seems so uncomplicated to us now that “contemporary art” has become a standard term for describing art made over the last decades and in the present.[3]

In the case of the Asia Society, the repeated use of the term “contemporary” seems accidental, less mindful of the nuances of art historical parlance than it is about an emphasis on the present. The “contemporary artists” of the exhibition therefore stand in stark contrast to the Asia Society’s official exhibition program. However, despite the fact that at least three generations of Pakistani modernism were present in the exhibition, this use of the term “contemporary” collapses them all an immediate present. Such art historical nuances seem to have been less important to the organizers in New York than an opportunity to prove that living artists working in a modernist style existed outside Europe and America: that Asia could be contemporary, too.

We could argue today that this equation has flipped entirely. Museums of modern and contemporary art are being newly built or expanded around the world, and institutions that generally privilege pre-twentieth century history are expanding in order to accommodate contemporary and modern works. Asian modern and contemporary art is less likely to be pushed into corridor and auditorium spaces at the back of prominent art institutions than it was fifty years ago. However, the question of what even the most generous of curators privilege and look for from their shows must still be asked. Anthropologist Jessica Winegar has persuasively described an experience that most Pakistani artists showing globally today know well: after 9/11 art and cultural production from the ‘Muslim world’ has gained increasing currency in Western museums, deployed not only for its art historical power and value, but also for its ability to create “bridges of understanding” in a twenty-first century global battle for hearts and minds between the Euro-America and its others; a battle fought between nations, their leaders, and their populations, sometimes without even knowing it.[4]

Flash back to the Cold War. The Asia Society exhibition that this article has focused on wasn’t the only survey of modern Pakistani art on display in New York in 1965. Opening in April 1964 and closing in October 1965 was Pakistan’s national Pavilion at the New York World’s Fair. Although archival documents pertaining to what was included in the Pavilion are even more sparse than the Asia Society show, works by Pakistani artists including Ismail Gulgee and Jamil Naqsh did find a place in the display. Situated between a section of the Pavilion titled “The Glories of the Past” that showed Mughal, Gandhara and Indus Valley objects, and another titled “The Promising Future” which included a model of Islamabad, living Pakistani artists found themselves situated amidst folk arts and handicrafts in a section of the Pavilion titled—what else?!—“The Progressive Present.”

[2] Additional information has also been provided by the exhibition’s patron in Pakistan Syed Ali Babar, interviewed in May 2016, and from a short clipping in the Dawn, (22nd November 1965). Additional research in Pakistan and North America will follow this article. Rockefeller Archive sources: Collection Asia Society Records, Country Council, FA110, Series 2, Box 125.