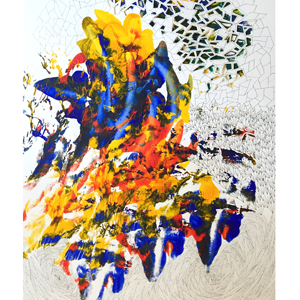 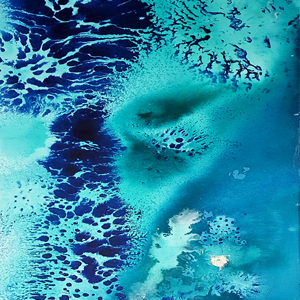 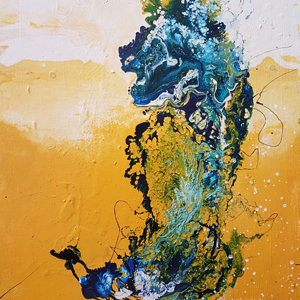 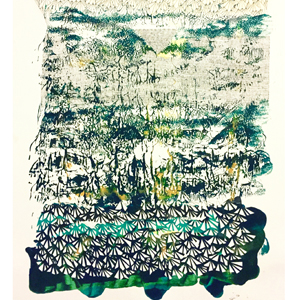 Concepts and techniques: The Fractal Nature of Things

Abstract art often gets a bad rep in today’s world of multidisciplinary high-impact visuals. It would be a bit pointless and overwhelming to go through all the stages and movements of abstract expressionism to understand 21st century art in its entirety as there is no correct formula. In Pakistan however, with the plethora of social and political issues reverberating through the country, artists of all fields often feel obliged or intrigued to pick up on narratives that involve a greater context. It is unusual these days to see contemporary artists who let technique, colour and form be the driving force in the work. Using tumultuous yet harmonizing colours, pen marks and speckles of ink, two artists at Full Circle Gallery showcased pieces that emphasize upon engaging visuals and reflective emotions in a show titled ‘The Fractal Nature of Things.’

For Emaan Mahmud, her practice is correlated to other creative ventures in her life – her writings, social experiments and outreach programs are little hints in her pieces. The intense brush strokes, merging colours and squiggles of form remind the viewer of amoebae and cell diagrams in hypertensive colour. There is something both organic and scientific about Mahmud’s ‘paintings’ as they have a large degree of experimentation but the visuals and particular details are slightly reminiscent of lab tests and distorted scans. She speaks about her artwork as a facility to be frank and unrestrained; “I paint to unwind and to play by mixing different mediums together and trying to control the spontaneity while pouring the paint onto my canvas, while playing with the variations in textures and colors.” This can be testified in pieces such as ‘Brilliant trepidation’, ‘Existential Joy’ and ‘Fractured movements’. The cobalt and indigo blues churn across the surface replicating water bodies and splashes of movement.  In other pieces, such as ‘Etchings in liquid (2)’ spontaneous single strokes are features in defiant shapes, singling out the artists’ sharp approach.

Although every  artist has his/her own  story behind their work and influences, the most exciting aspect of displaying work is to garner responses from the audience. The second artist  for the show, Sana Dar created pieces with multi-layers, revealing textures and undulating mediums. The artist explains that her work is deeply personal to her yet ‘ On one hand, the viewer has the liberty to experience his own instinctive response on first glance. The boldness of the paint in contrast to the delicate details around it, along with the title, then begin to weave a story for the viewer, enabling him to ponder on its deeper message.’  From Dar’s title’s one can detect that her collection of pieces are derive from emotions and retrospectives such as ‘The life in the light’, ‘The fury in the jury’ and ‘Journey’.  Perhaps it is quite apt for the artist to mention Rorschach inkblot test as an inspiration behind the visuals amalgamated in her work.  The Rorschach inkblot test is a psychological way of analyzing the human emotional status by categorizing images. It’s ironic to see how the artist takes the basic concept of this test to create her own expressions and asks the viewers to comment on them. She elaborates on this connection by describing in her statement how the process of creating her pieces is dilated by the introduction of the viewers.” Whatever little of it I know, and feel; my aim is to evoke the same sense of passion, patience or persistence (amongst other things) that were felt when creating the work.”

With an array of diamond cut outs and pen work clustering in corners and bold strokes of glistening paint, ‘The Fractal Nature of Things’ poses a question of the future of abstract art in Pakistan. With an increase on research orientated projects that span over archives and churning out photographic documentation, there is a lacuna in gallery spaces when it comes to work that takes on technique and its’ reflective emotions. It’s interesting to see how simple journeys in life – both physical travel and emotional states – can and will always have the power to be an influence behind the creative process. Mahmud notes that  in her statement ; ‘This particular ongoing body of work, one could say is an amalgamation of the mental notes I made while practicing as a painter, making ‘concept less’ paintings in a time where concept trumps technique.’ However perhaps the 21st century perspective of a ‘concept’ has been distorted and magnified out of proportion as in Mahmud and Dar’s work there are very key aspects of conceptual and intellectual engagement. Not only does this challenge viewers to think outside the everyday notion of ‘conceptual art’ but it pushes us to engage more actively in viewing and understand art.

One Response to Concepts and techniques: The Fractal Nature of Things