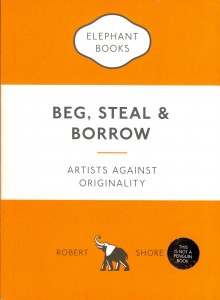 Normally a peaceful specie, artists, of and on argue, quarrel and question about the position of a person who had first created an image, idea and way of working, prior to his/her followers. Occasionally these, otherwise academic debates turn sour with the accusation of someone copying another artist’s style. There are links on social media (like Facebook) which inform about leading artists of our time and region and their ‘cheatings’, by juxtaposing their works with other artists, regardless if those are residing in Siberia, surviving in Senegal, or working in Surinam. No one had ever heard their name or read about their art practices yet a detail of their paintings, a single shot of their installation is enough to shame some of our most celebrated and sophisticated artists.  All on the pretext of originality.

Perhaps the issue of originality and reproduction needs to be revisited. Henry Geldzahler coined the term for creating art as ‘making it new’, because he believes that what an artist creates is not something new, but a different composition of elements (image, concept, material, method) which existed before him. Walter Benjamin in his seminal essay ‘Art in the Age of Mechanical Reproduction’ indicated the split and separation of original and copy and envisaged how the idea of originality is bound to be altered with new means of fabrication.

But not only with the new process of forging art, the concept of original and copy have been challenged in the age of postmodernity (influenced from Jorge Luis Borges’ writing). Now another author, Robert Shore has dealt with the same issue taking into account of present history of art. His recent book ‘Beg, Steal & Borrow: Artists Against Originality’ offers examples of art and cases of artists, all defying the construct of original art pieces. Complementing the premise of the book, its cover is also designed in a pattern that appears as if a standard Penguin publication. But it is ‘Elephant Books’, and the cover page has a small sticker declaring ‘This is not a Penguin book’.

The writer, the editor of Elephant magazine, mentions the works of artists who have been reproducing other artists – not as forgeries, but as a conceptual device to convey their ideas and position on contemporary art practice and art world. Quoting Sherrie Levine: “We know that a picture is but a space in which a variety of images, none of them original, blend and clash”, Shore mentions the curios case of Elain Sturtevant, who died in the age of 89, and prodcued replicas of American Pop artists in her life. She had her first solo exhibition at the Bianchini Gallery New York. “That show features carefully handcrafted works that begged to be mistaken variously for the plaster sculptures of George Segal and the stripe paintings of Frank Stella, not to mention silkscreen images that were almost indistinguishable from the breakthrough Flower series but the then emerging art superstar Andy Warhol”. Shore continues with the remark of a reviewer of her show “must be the first

artist in history to have had a one-man show…. that included everybody but herself”.

Robert Shore describes how the ‘original’ artists responded to this artist, who “create vertigo”. Robert Rauschenberg contacted her to make a replacement for one of his combine painting that was stolen, or when someone asked Andy Warhol about his working method, he answered “I don’t know. Ask Elaine”. Shore compares the price of ‘original’ and ‘copy’ by informing that Elaine Strutevant’s “repetition of Roy Lichtenstein’s Crying Girl sold for $ 710, 500 in 2011, compared to the $78, 400 achieved by the ‘original’ at auction four year earlier”.

The book, in its fluent, informal, yet informative prose is an elaboration on the false idea of originality and authorship, because it provides examples of how an art work cannot be conceived or constructed without the process of borrowing, editing and reshaping. There are a number of art works which certify that artists have been relying on their predecessors in order to create works which are now considered – and worshipped as original. The author compares Titian’s Venus of Urbino to Edouard Manet’s Olympia, along with numerous other works from art history which were derived from other sources, today revered not because of the innovation of the maker, but how he appropriated an already idea/imagery to make it his own.

In addition to art and artists, Robert Shore writes about the literary works too. William Shakespeare who according to Alexandre Duma: “After God has created the most”, was reworking with themes which were already in circulation in and prior to his time. The grandeur of Shakespeare is not in his inventions; it is in his recognizing the basic human essence that has not changed throughout history and geographical differences. However someone can still accuse the great English writer of using other people’s material.

A course that is common in today’s world, in which the idea of originality and authenticity is defended like a brand. There are accusations of plagiarism in the world of art, literature and academia forgetting what Kenneth Goldsmith pointed out: “The plagiarism and copyright trials of twenty-first century are what the obscenity trials were to the twentieth century.”