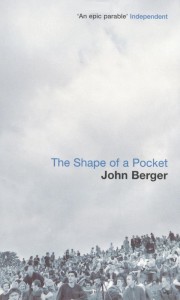 Book Review: The Shape of a Pocket

When you open The Shape of a Pocket, you enter a new world of imagination. As you sift through the pages of this collection of essays and short pieces, the reader is fascinated as each chapter unravels and unfolds an entirely new world of imagination altogether. Every time you go through the book, you have a new perspective to probe upon. What captivates is that you don’t need to be an artist to understand this book. People from all walks of life can pick it up and get engrossed in it. It is thought provoking and written in straightforward language for people to comprehend it in their own way and also understand the writer’s point of view.

This book paves its way smoothly by first giving us a glimpse of Chauvet Cave, with the paintings of horses, rhinoceros, ibex, mammoths, lions, bears, bison, reindeer, aurochs and an owl which are probably fifteen thousand years older than those found in the Lascaux Cave and then moving on to the mystery of the Fayum mummy portraits, which were named after the Egyptian province of Fayum, a fertile land around a lake, sometimes called the garden of Egypt. The text then moves to Degas, an artist who put his heart into his life’s work. What makes the story strange is that Degas’ art was supremely concerned with women and their bodies. For Degas nature was the object of investigation, which eventually becomes the subject itself. Degas simply invented or used different occasions to pursue his study of the human anatomy.

From there, Berger takes us to his interesting correspondence with Leon Kossof, after which you enter Vincent van Gogh’s drawings. For van Gogh, the act of drawing and painting was a way of discovering and demonstrating. Each stroke is explicit and it’s his drawings which value precision. Berger beautifully describes how Michelangelo played with the Sistine Chapel’s ceiling space. He painted the church with such love that it becomes iconic and a focal point.

Berger further throws light on Mark Rothko’s work. For him non-figurative art is no exception. Rothko, one of the most remarkable painters, is generally identified as an abstract expressionist, although he himself rejected this label and resisted classification as an abstract painter. A late canvas by Rothko represents an illumination or coloured glow which derived from the painter’s experience of visibility. When the painter is at work he judges the canvas in lieu of something else that he had witnessed.

Berger then goes on to elaborate on the remarkable Rembrandt, how he loved to draw, examining how he used canvas after canvas to show different angles of a body. Berger says this was Rembrandt’s special power: the power of narration. His paintings speak several voices at one time.

Giorgio Morandi – that subtle painter – is then brought into the picture. The way Berger explains the life and art work of Morandi is tremendously beautiful and concise, yet it doesn’t miss any important detail. It shows the link between his everyday life and his art work. Berger unveils the mystery of Morandi’s life which was connected with his work. Morandi lived surrounded by people, a man closely linked to the everyday life of his neighbours and town, who nevertheless pursued and developed the purity of his own solitude. His art divides itself into three periods, the difference between them being subtle. From the time of self portraits until 1940, he paints in order to approach the object being painted – the path, the trees, the flowers in the vase, the tall bottles. During the second period between 1940 to 1950, the painter stays still and the objects seem to be approaching the canvas. He waits and they arrive. In the final period from 1951 until his death in 1964, the objects seems to be on the point of disappearing, not that they are faint, but rather that they were weightless on frontier of existence. There is an evident progression in Morandi’s work; his mastery increases as he grows older. In his life he may have shut himself away, yet his art is strangely affirmative.

Through these analytical and insightful texts, Berger has summed up an era, different civilizations, different artists from different periods in a small pocket. He has tactfully and with great mastery shed light upon the artists and their immortal works. He, however, has made a conscious effort to not dictate the reader. Like a painter, he has used words to put forth his point and at the same time given the reader the space to probe, think, analyse and decide for herself what the writer has really pointed out.

John Berger. The Shape of a Pocket. Vintage. 276 pages.

Aamna Hussain is a Lahore-based independent curator and art writer.