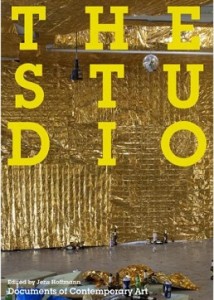 Studio is another addition to the ongoing series of books called Documents of Contemporary Art. Edited by Jens Hoffman, it provides a thorough overview of the ever-changing representation and experience of the artist’s role in the studio from early modern period to the present. Organized into four sections the publication brings together more than fifty texts that survey the diversity of contemporary studio and post-studio practice.

With the emergence of conceptual art in the mid-1960s the traditional notion of the studio became almost obsolete. Other sites and ways emerged for the construction of art work leading to the idea of “post-studio practice”. However, the studio never went away, but instead was constantly reinvented in reaction to new realities.

In his introduction, Hoffman proclaims that “while many artists may not have typical studios anymore, most do maintain some kind of working space”. For instance, in recent times many artists have turned their studios into office like spaces from where they are able to organize multiple operations. Others use it as an exhibition space and as the subject or point of origin for their practice. For many the studio comprises of just the laptop. The constant rebirth of the working space and its continually expanding concept is the essential theme in Studio.

Since the very beginning, artists have constantly formulated the role and function of the studio in different ways. In her essay ‘A Master in the Studio’, Svetlana Alpers refers to Rembrandt’s artistic practice and use of studio. Considered intimate and personal, the staging of life in his work space was unconditional to Rembrandt. Using the artist as an example, Alpers suggests that “while every painting in the seventeenth century was a studio production, it was at this time that painters addressed themselves to the situation; the relationship between the painter (alone) and his model(s) in an interior space was made the subject of art”.

It would be fair to say that artist studios in many ways are a source of inspiration – a foundation for inquiry, research and experimentation. Daniel Buren in his essays ‘The Function of the Studio’ (1971) and ‘The Function of the Studio Revisited’ (2007) suggests that art is in a constant state of flux –and that in the studio the artwork is closest to its own reality. Thereby removing the artwork from the studio would mean changing its context in whole. There are several compositions in the book which suggests that using the studio as the subject matter in art has given rise to a diversity of art practices. Also mentioned in contrary are changes in art practices that have altered the studio space. In ‘Marcel Duchamp’s Studio as a Laboratory of Perception’ Herbert Molderings explores Duchamp’s workstation. He indicates that as the artist’s approach to art changed, so did his studio – which from a painter’s studio had transformed into a laboratory – “a place where thought, experiments could be visualized empirically.”

The final and most stirring section of the book examines the expanded ideas of the studio. Pertinent to current times, these essays discuss post-studio practices from a private to a publicly oriented locale. For example, in ‘The Studio of the Street’ Jeffery Dietch describes Jean-Michel Basquiat as an artist who made no distinction between life and art; he drew constantly on the street and wherever he was living.

Studio draws us to conclude that while the role of the studio and its function will always be shifting and changing, today, the studio is that place where we know we can always find the artist when we need to, where she or he is always plugged in and online, always accessible to and by an ever-more-integrated and ever-more-dispersed art world.[i]

Seher Naveed is a Fine Arts senior lecturer at the Indus Valley School of Art and has shown in local and international group exhibitions.