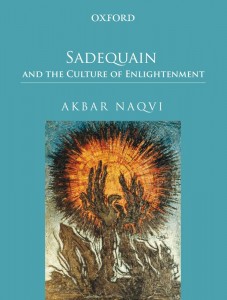 Book Review: Sadeqain and the Culture of Enlightenment

In the age of load-shedding (or load management) of electricity in Pakistan, the meanings of enlightenment are not the same what are usually understood of the term generally associated with the age of modernism. Here, apart from yearning for light, the concept of enlightenment has gone through a tremendous transformation after the 9/11, and due to all terrorist attacks and extremist acts, since the Islamic Republic of Pakistan is now projecting an enlightened and modern vision and version of the country that has long been accused of promoting jihadists, and exporting them across the globe.

In these contexts, and the changing scenarios of world politics and social framework, the need to remember individuals, who remained liberal in their thought and liberated in their approach from our surroundings is utmost necessary. The brief history of Pakistan is endowed with personalities, particularly in the realm of arts and literature, who were considered rebellious in their outlook thus challenged social, religious and ethical norms of society. Perhaps the brightest example in this regard is of Josh Malihabadi, the poet who never compromised on his atheist views and excessive behaviour in his private life.

Yet the society at that time was open enough and prepared to accept this kind of behaviour, even respected diversions from the usual in the name of art and literature. Another luminous figure of such kind was Sadequain, who did not budge or bend for the sake of society’s expectations or impositions. He, following Andre Gide, was the artist who knew how to swim against the current. However a number of misunderstandings were generated during his times and after. He faced opposition from various sectors of society, so much so that his exhibition at the Punjab Arts Council’s gallery (Freemason’s Hall in Lahore) was sabotaged through a mysterious fire that damaged a few paintings, since those allegedly contained immoral substance/imagery.

In his recent book ‘Sadeqauin and the Culture of Enlightenment’, Akbar Naqvi discusses the aspects of enlightenment in reference to Sadequain and society. Published by Oxford University Press the book is a useful document in understanding an artist in his cultural and historic milieu. The volume focuses on Sadequain’s contribution in calligraphy, his connection with his contemporaries, such as Ghughtai and Shakir Ali, along with an insightful essay on the culture of Al-Hind (‘Al-Beruni and Amir Khusro: Beacons of Enlightenment’) who were, according to the book’s  prologue “founders of enlightenment in the Indian subcontinent. They carried on the tradition of understanding and tolerance without which Muslims could not have become the conduit of knowledge from ancient India, Arabia, Persia, and Greece, to Europe, where they inaugurated its first renaissance.”

In a sense Sadequain was heir to that tradition, as in the first chapter ‘Framing Sadequain: Malamati or Holy Sinner’ Naqvi elaborates: “One would wish that curators and critics placed Sadequain in his correct multicultural context, one which includes ancient Indian mythology, Arabic, Persian, and Urdu literature, as well as the Muslim Enlightenment of the Raj.”

The author continues constructing connection between images and the words in the painter’s world. Establishing links between the painter’s work and verses of Ghalib, Iqbal and Faiz, Akbar Naqvi, in his signature style, draws references from a wide range of sources, including history, Sufism, literature and his own memory of meeting Sadeqauin on numerous occasions. The blend of personal and literary makes his prose unique, intriguing and interesting. While discussing Sadquain’s art Naqvi states: “He epitomized modernity in his traditional culture and vice versa. This was the similarity of his contribution to the work of the great pioneers of Pakistan’s modern art which retained the concept of Al-Hind”.

While analysing Sdaeqauin’s line drawings, Akbar Naqvi makes a connection between his act of writing and the act of making images. “Taught and trained in calligraphy, he learnt to draw and paint in the modern way, without going to an art school. The line of the Khat or the Arabic/Persian alphabet, and the arabesque of his own kind were the principal strength of his art.” The author also includes a chapter on ‘Sadeqauin’s Rubai’ (poetry), his verses, which have been published in separate volumes and provide a way to understand how the artist was immersed in the magic of written word. Like his painting, his poems also contain matter that can invite hostile responses, but the painter was adamant about his own way, voice, vocabulary and vision. His association with Islamic calligraphy is often misjudged with his link to state patronage, but Akbar Naqvi argues that this was not the case. “….Sadeqauin compromised with his admirers. One may call it hypocrisy, but I do not believe it was that, rather he knew how to live in peace with the enemies of the people in order to expose them.”

Only Sadeqauin who followed his own path and direction could do that, because in the words of Akbar Naqvi, “Sadeqauin was a king who had crowned himself with thorns.”

Sadeqauin and the Culture of Enlightenment by Akbar Naqvi will be launched in the ArtNow Pakistan sessions during the Karachi Literature Festival 2016.