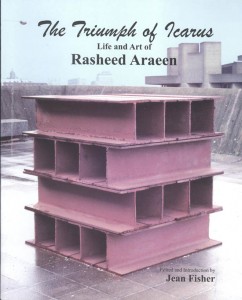 Book Review – Rasheed Araeen: To the West With Love

The book The Triumph of Icarus is a compilation of essays based on the “Life and Arts of Rasheed Araeen.” Araeen is a renowned London-based artist, originally from Karachi, whose works were displayed extensively in Pakistan and abroad. Araeen started working as a sculptor without any formal training. In the late 1970s, he launched an art journal, later renamed The Third Text, which deals with postcolonialism, the Third World, and ethnicity. Thus, Araeen is not just a long-standing Pakistani artist with a significant body of artwork, but also written work.

The book is an almost 200 page thick bundle of sagacious essays that attempt to become the “best mirror of the oeuvre and writings of one of the foremost avant-garde artists…” Each insightful essay is accompanied by equally gripping photographs of Araeen’s work. Most of the writers, (mostly artists, but also a few academics and critics) are based in the UK, as Araeen has been since the 1970s. Many of them have met, interviewed or heard Araeen lecture in person. Therefore, they come up with personal and perceptive insights into the artist’s work.

The book is edited and introduced by Jean Fisher, a Professor Emeritus at Middlesex University. The introduction starts with this delightful quote by Allama Iqbal: “More difficult than the conquest of the world is the task of seeing the world.” This is something Araeen has been trying to do all his life.

The title of the book refers to the myth of Icarus, the Greek son of the god Daedalus, who tries to escape the Greek island of Crete on wings of feathers and wax. But the wings melt and he drowns in the sea. Fisher explains in his introduction that the title “resonates with the artist’s challenge to Western myths both ancient and modern.” England in the 70s was racist and not very hospitable to immigrants. It is no wonder, that slowly, Araeen’s artistic endeavor became internal. Islamic references, Urdu text from Karachi newspapers and the green of Pakistani flag surface in his work.

Most of Araeen’s work varies between modernist, abstract and minimalist. Occasionally there is an allusion of an engineering marvel. Sometimes it is a lucid manifestation of a Pakistani coming to terms with a new culture as well as modernity. As a former subject of the British Empire, Araeen slowly became more conscious of colonialism and the European exploits abroad. This is mentioned in the essay by Fisher, titled “An Art of Transformation”. Araeen rejects the European tradition of presenting secluded and “virgin” territories in his artwork and instead returns to the “waste of exploitation”, which was later denounced by art dealers and critics. Araeen’s billboard project, titled “Golden Verses” included Urdu verses with English translations concealed in the border, meant to be a response to the issue of freedom of speech and the Satanic Verses controversy.

It is unfortunately not possible to mention all the essays here, though all of them deserve to be examined. “The Soul of a Minimalist”, an essay by Osman Jamal, reminisces how in a seminar titled “The Journey of an Idea”, Araeen himself affirmed that his journey had been Jungian in nature. Many “chance encounters” inspired him. For example after an argument with a friend, something stirred in him deeply; he went home and painted an abstract painting that remains untitled so far. The piece narrates the tale of Araeen’s flight from civil engineering to the art world, his inspiration from the artist Caro and the influence of politics on his work. Iftikhar Dadi discussed the “tradition of Islamic calligraphy and the work of Rasheed Araeen.” He relishes the rich cultural and religious heritage which Araeen successfully weaved into his work. The most striking work in this section is the Ethnic Drawings, based on Araeen’s self-portrait, covered in Urdu alphabets of myriad colors.

Stephen Wright’s essay, “The Escapologist: The Transformative Potential of Art Beyond Art” analyzes a series of writings by the artist “where Araeen’s personal narrative is intertwined with what he likes to call “a journey of the idea.” “The New works of Rasheed Araeen” deals with how the artist has evolved over the years into a “black activist”. Stephen Wright evaluates his works and themes displayed during exhibitions. The essay also mentions the resistance Araeen faced on showing his works in galleries that disapprove of “non-white” works. However, Araeen himself resisted the label of “Arab” or even “Muslim” art for his own work.

Guy Brett, an artist based in UK observes that “Araeen makes himself visible in a way which is not ‘for the West’; but in critically reclaiming himself as a subject is changing our perception of the world.” And that to me too, is the essence of Araeen’s life and works, of which this book is an interesting (and highly recommended) glimpse.

Ammara Ahmad is a staff member of the Nation, with an interest in human rights, arts and literature.  She tweets as @ammarawrites