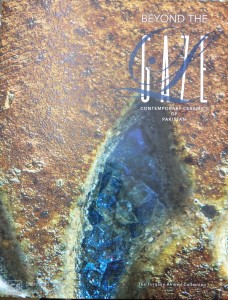 Book Review: MASTER AND THE MATTER

There are many ways an artist dies. Besides natural causes, and accidents, a number of other factors also annihilate a creative person. Memory, being one of these, or its loss – to be more precise. Often artists produce work, get recognition, enjoy admiration, collect money for their pieces, but as soon as their bodies leave this mortal world, they rest in the realm of oblivion – eternally.

This happened to Salahuddin Mian, the artist par excellence, who lived in Lahore, taught at NCA, and for many decades were known as the sole – and the superb, practitioner of the art of ceramics. His works were exhibited widely and collected enthusiastically across the country, but after his death in 2005, he soon started to diminish from the public memory of art. Only his former students, fellow colleagues and a few art connoisseurs recall him and his art, occasionally.

There are several reasons for this negligence, primarily the lack of museums and public galleries, where an artist’s work is regularly seen. In facts books, to some extent can substitute this as they provide information on artists to a large number of people belonging to different cities and centuries. Beyond the Glaze: Contemporary Ceramics of Pakistan is one such volume, which reminds us the existence of Salahuddin Mian, offers us images of his remarkable artworks, and introduces us to some other artists of ceramics.

A publication of ‘The Furqaan Ahmed Collection’, the book is impressive in many aspects. Text, layout, pictures, and printing. More than anything else, it is a valuable document on a genre, that has not much written about or respected in Pakistani art. The book begins with a detailed interview of Dr Furqaan Ahmed (the publisher of the book) by Noorjehan Bilgrami, talking about his interests as a collector. Responding to a question about his earliest acquired artwork, Ahmed remembered his return to Pakistan in 2008, when he saw a notice about “a ceramics show opening at the V.M. Gallery. So I went, and I bought something totally at random and took great pleasure in that piece”.

Probably the presence of pleasure connected the Collector to the Artist. Since Salahuddin Mian created works which revealed and reflected the joy he had while shaping, firing and glazing them. Surfaces of his pottery suggest a pictorial delight, managed through the manipulation of the texture, careful mixing of colours – all that confirm mastery of Mian. Salima Hashmi in her essay ‘Enigmatic Clay: The Ingenuity of Salahuddin Mian’ brings comprehensive background to the making of the artist. His origin, student day, his life spent at NCA with an analysis of his work method and choices. Her text draws a map of the artist, who was her colleague for many years, so she mentions: “It was well established that his thorny attitude towards his peers and his students was played out in the solitariness of the ceramic studio at NCA. And yet long bouts of work, in which intruders were generally unwelcome, could just as easily be interrupted by a truly interested stranger being greeted with smiles and even an amiable exchange over coffee”.

The book, if has an ample focus on Salahuddin Mian and his art pieces, it views the present practice of ceramics in Pakistan, through Zarmeena Shah’s essay ‘Culture | Material | Tradition: Fields of Possibility in Contemporary’. Shah discusses the art of Salahuddin Mian, his student Scheherazade Alam, and other ceramicists such as Nabahat Lotia, Riffat Alvi, Sadia Salim, Mehwish Ehsan and Sara Musharraf. But more than the overview of contemporary scenario, Shah’s text facilitates an understanding of the currents of this genre, connecting it to its origin in history: of more than five thousand years as ago, as well as linking its wide usage and context to the society, including architecture. Her essay, citing status of ceramics (“In 2017, Architectural Digest described ceramics as ‘officially having a full-fledged movement’”) remarks on its location in local art: “In Pakistan then, as well as globally, ceramics seems to have re-emerged as a sculptural medium in its own right, capable of expanding and moving beyond its traditional scope and into a contemporary world of art and design”.

Dr Abdullah M I Syed also highlights the same state in his text ‘Contemporary Ceramics in Pakistan’ incorporating those who were not trained as ceramicists, but are making three-dimensional works in this medium. For example, Munawar Ali Syed and Fahim Rao. Interestingly the book presents a range of works by artists, who with being categorized (orthodox) ceramicists, chose clay to fabricate their art.  So one is excitedly surprised to see works of Afshar Malik, Ali Kazim and Noor Ali Chagani, to blissfully note that it is Art what is important, no matter if made in fired clay or graphite on paper; and created by Salahuddin Mian or Aliya Yousuf.