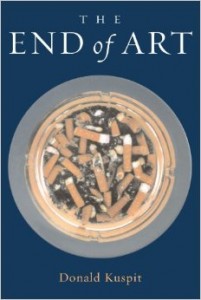 Art’s fall from grace has been fodder to the theory mill for years and End of Art, by distinguished American critic Donald Kuspit, and is among the most recent volumes that rationalizes this transition with a volley of hard hitting facts.

Devoting a major part of his text to current art trends that signal the end of the cult of the unconscious, Kuspit reasons, “without the unconscious for inspiration, art begins to run on empty, which is what much of it is running on today.” Citing examples of prestigious museums of modern art like MOMA’s revisits of 20th century art, not in the light of its seminal movements (like Cubism or Abstraction), but in terms of ‘Peoples, Places and Things’, he points to the demise of greatness, genius and uniqueness, the modernist collection embodies, and the rise of postmodernism’s preoccupation with the banal and the everyday.

When commodity identity overtakes and subsumes aesthetic identity, art no longer furthers personal autonomy and critical freedom. Without aesthetics, what does the work of art become? Something like Duchamp’s Large Glass, which he proclaimed was ‘a renunciation of all aesthetics in the ordinary sense of the word.’ The Large Glass completed itself only when it broke and Duchamp pieced the fragments back together, confirming that its intention will never be perfectly realized. Similarly, when the Fountain 1917 was praised as beautiful and tasteful, when it entered the museum, Duchamp became angry because it was understood exclusively, on an aesthetic plane, which destroyed its confused identity as art/non art – mentally art, physically non art.

Proclaiming that Duchamp’s greatest achievement, the discrediting and undermining of the aesthetic as a triumph of destructiveness that has corrupted 20th century creativity, Kuspit labels this willful indifference to the aesthetic as the end of art. He tags subsequent production as ‘post art,’ a term invented by happening artist, Alan Kaprow. Pitched to the crowd, Kaprow’s happenings took place in a simulated street rather than a studio. Decentered, as the street has no centre, the artist became another minimal figure in a social space in which everyone is marginal. The studio, no longer the site of creativity, became a post artist’s alley littered with garbage, an ultimate entropic happening. To Kuspit, a Damien Hirst’s installation, Home Sweet Home, priced in six figures, is the most perfect example of post art. The work  – a collection of half full coffee cups, ash trays with cigarette butts, empty beer bottles, a paint smeared palette, an easel, a ladder, paintbrushes, candy wrappers and newspaper pages strewn about the floor – was the centerpiece of an exhibition of limited edition art assembled in the window of a Mayfair Gallery. It was dismantled and discarded the same night by a cleaning man who said he thought it was garbage. Far from being upset, Hirst greeted the news as ’hysterically funny’ since his art is all about the relationship between art and the everyday.

Kuspit maintains that beyond the ripple effects of Duchamp’s intellectual mechanics, post art also owes a great debt to marketing aesthetics. Andy Warhol, an expert at what has come to be called experiential marketing introduced the concept of turning banal objects like Campbells soup tins and Brillo boxes into aesthetically charged products when identified with the charismatic personality of the artist himself. He said, with deceptive cleverness, “business art is the step that comes after Art.” By classifying art with money, Warhol devalued art while giving it the value of money. “Art loses spiritual cachet to gain social and economic cachet – the credibility, influence and power that only money has in consumer society.” Today Jeff Koons, who exhibits everyday products like vacuum cleaners as works of post art, is the leader of the art marketing pack. Asserting that marketing has blurred the line between critical and commercial recognition. Kuspit thinks it is impossible to avoid the temptation of money because art itself has become money. A high price for a Damien Hirst art work is more scandalous than a good review and more provocative than the work itself.

Similarly, the author alleges that the arts subservience to the media is another nail in its coffin, and the best post art can hope for, now, is to attach itself to a high profile cause or become a current newsworthy event. When Madonna presented the Turner prize to Martin Creed in 2001, she made his name by reason of hers, showing the power of kitsch celebrity over avant-garde celebrity. The passionate embrace of technology, making digital media an exciting but soulless new expression, has also pulled art away from its epicenter.

Relentless in his assault on the forces that have derailed art from its true path, Kuspit’s text, stirring and harrowing by turns, hits obscene lows when he mentions post arts ultimate regression to excremental art. Kiki Smith’s Tale, 1997, depicted a female on all fours with a trail of shit emerging from her anus.  But this is art bashing with a genuine concern. His aim is to cleanse art of its destructive agents in order to revive the creative spirit.  Reposing his confidence in the New Old Masters, he posits that their post, postmodern art has the spirituality and humanism of the Old Masters and the innovation and criticality of the Modern Masters. Artists like Lucien Freud, Paula Rego and Jenny Saville etc are pronounced as visionary humanists with complete mastery of their craft. This alternative art is certainly penetrating and humanist but Kuspit fails to acknowledge that the emotional quotient in a Freud, Saville or a Rego painting is still tilted towards cynicism. One wonders if the heroic and sublime are still essential to art or have we lost them altogether?  In the End of Art, Kuspit chronicles is in tandem with the end of sacred values in life at large, and a nostalgic return to the past is not possible, but retaining and building on vestiges of inherent goodness is a thinkable option.

Written essentially with western art in mind, Kuspit’s End of Art also makes no mention of the vast reservoir of non-western art, especially vigorous Asian art, which is now asserting itself.  While dependent on the western construct, this art, unlike nihilistic western conceptual imperatives, is determined by different causal forces. It is purposeful as it addresses crucial issues of national, political and social identities in post-colonial societies, and its fusion with regional indigenous art forms can open exciting possibilities of other directions in art – so all art is not dead after all.