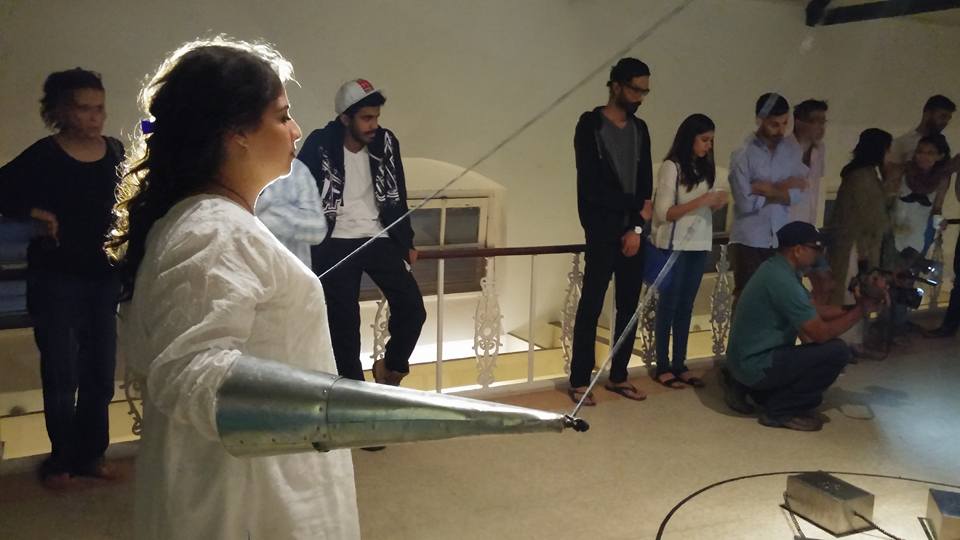 The act of putting together an exhibition is the scripting of a performance; the aesthetic decisions made about the placement of objects and the limits (or lack of) drawn for viewers to move in and interact with the space are all performative scripting techniques in disguise.

The publishing moment is the ‘event’ or the ‘encounter’ where information/ the work of art meets an ‘audience’ (the moment you are reading these words counts).

Media, in its evolution from the printing press and the one PTV/Radio Pakistan channel(s) etc. has ultimately folded in on itself as the internet has created an accelerated form of dissemination; global versus local. Somehow a capitalistic tendency and thus the questions of ‘entertainment/spectacle’ and ‘marketing’ have been ever-present in this nurturing leaving the ‘truth’ usually bent or left out entirely in the process.

Lets carefully bend the truth then. If it is absolutely certain that my subjective words will never do what seeing the work in person would; then lets bend actively, cautiously and patiently. (click here).

Beyond the title of the show

Au Delà translates roughly as ‘beyond’ or not near/far away.

The foreign; the exotic; the other as the muse continues to charm the human psyche even as distances collapse with rapid technological progress. What does this acceleration do to the way we romanticise difference and how does it continue to change the nature of (our) experience? Why is a foreign environment sometimes conducive to inspiration? And what can be kept/held from an experience ‘there’?

The two day pop-up exhibition of installations and performances at FOMMA featured four local artists drawing from their experiences ‘elsewhere’; where elsewhere could be a state as well as a location.

Being in conversation with the artists from a distance and witnessing all the work via the internet we created a format that allowed me to act as an extended contributor. I pushed the collaboration forward by writing this review/text piece which wonders about the accessibility of their ideas (and mine); of inner and outer circles of understanding; of who the audience is and who the audience should be; and other such far-fetched thoughts (seemingly) only able to be had from a ‘safe’ distance.

As a Pakistani art maker working overseas, the ‘disparity’ in society has started troubling me and it has become difficult to look at privilege objectively. To simply ignore it would not be doing justice to the social context our work sits in. Work should not be made purely for the bourgeoisie. The ‘bubble’ mentality is easy to comment on all the way from here, but ultimately the distance has made me see clearly that there is a lack of trust on so many levels.

When speaking of technological advancement and all that is possible today, it has to be acknowledged that what is achievable and being lived by some (privileged) few is not necessarily reality for most. However, in order to not let ‘disparity’ paralyse me, I use the word ‘accessibility’ towards hope for some eventual reconciliation of humanness in breaking the severe classism that rules most society today.

Changez Basir, a craftsman and designer somehow bridges this gap. Formally an industrial product designer, currently venturing a woodworking workshop ‘Carpenter’ at the Commune Artist Colony in a ‘not-so-DHA’ part of Karachi, Basir is properly passionate about authentic/real wood. His outlook is reminiscent of Tania Bruguera’s Reflections on Arte Utile, in the importance of functionality and the environmental, elemental and ergonomic awareness in his practice. And though he considers himself less of a ‘fine artist’ than a craftsman, his choice of titles such as ‘Naked Twins’ or ‘Lovers Intro’ begins to layer the skillfully made utility objects with a conceptual skin akin to the realm of fine art. Martino Gasper’s 100 Chairs in 100 days sits as a permanent inspiration for Basir, who uses salvaged wood to create sleek, original designs in line with his ideology of ‘humanizing technology’; to make it more accessible. Although Basir may not identify as a ‘burger’, I reckon his aesthetic and his openness make him a great asset to the burger community.

Amidst Basir’s furniture, against one of the walls, Danial Hyatt’s ‘Communication Simulator’ video game (click here for a digital version) in a wooden construction stands as a playful and humorous reflection on the emotional lack of patience encountered in conversation which escalates quickly into a debate and eventually a full-on battle of the egos. His use of lo-fi graphics and gibberish-for-language, references the absurd and hollow nature of most of our bickering with each other. Hyatt’s medium: virtual reality, is a first of its kind in the Pakistani contemporary art circle which, though it can seem to distance some, is an ode to his generation’s alliance with technology. I am reminded of his piece ‘Alliance’ at the VM Gallery in January 2014, which also dealt with a two person engagement in the form commonly known as the video game ‘pong’, only that he had written the code for it to not be a winning/losing game, and instead one where the two players had to work together to reach the visual and sonic climax of the piece. His work is a great example of the merits to be found in a tautological approach to art making; to exhaust as many (or all) potential manifestations of a single idea. (Also see DELSER. An eight week, experimental online publication launched in October 2014 ).

Encountering a work – whatever its form may be – inherently evokes in the viewer/participant a gut-response to the presented articulation/manifestation. In terms of a text-piece this is the syntax and jargon which makes one either feel(or want to feel) included in the elitist group that truly understands the vocabulary and sentence structures implemented; OR one is instantly shunned by a sense of exclusion in not-understanding, which triggers an aversion (or a disinterest) towards the message/content of the material being read. This is not just a post-colonial sentiment (in regards to english versus urdu) but is also a result of what is happening to the way we receive information(/art) since the proliferation of screens and the internet. I bring this up to call attention to the responsibility of the viewer/reader.

Sara Pagganwala’s conceptualization requires this kind of an engagement; her intricately cerebral ideas are coherently articulated, when one listens deeply. Pagganwala brings to the table a mapping of her psychoanalytical framework onto Zeerak Ahmed’s demarcated private safe-space to negotiate the constant redefinition of identity (i.e. the many selves and the unconscious) in an attempt at finding harmony with exterior notions of living structures. To me the two women (Pagganwala and Ahmed) together represent the personal and the sacred. Pagganwala uses the golden ratio to charter movement making invisible mandalas slicing the atmosphere with her sculptural harness-like object. ‘Protractor’ as well as her past works I have encountered at the Amin Gulgee Gallery are reminiscent of Lygia Clark’s negotiation of body and object.

Umberto Eco’s ‘Poetics of the Open Work 1962’ “propose[s] an ‘openness’ based on the theoretical, mental collaboration of the consumer, who must freely interpret artistic datum, a product which has already been organized in its structural entirety (even if this structure allows for an indefinite plurality of interpretations)”. Zeerak Ahmed’s installation ‘Tower of Chaos’; five metal boxes emanating different melodies strung together with electric cables, open to manipulation, guided by a written instruction; though arguably didactic, embodies Eco’s proposition aptly. Given that he uses examples of the interpretation of musical scores helps in understanding where Ahmed as a sound-maker is coming from in controlling the potential possibilities to structure the openness in a very particular way. Her photographic documentation ‘Scars, Moles, Skin’ and mixed-media installation speaking of the diluting of purity ‘can’t seem to remember what i’m forgetting; can’t seem to remember the truth’ are both delicate manifestations exposing the vulnerability of her domain. Better known as the sound producer ‘SlowSpin’, complexity describes her work best. Her live performance entails an alaap, which then gets recorded and played back on headphones nearby as the taped down ‘personal space’ becomes accessible to individuals for interaction.

I find myself asking why we as (educated) people are sometimes too jaded (or too cool) to accept genuine-minds that are (re)searching and expanding their knowledge about the ideas that inspire them in a world where insane amounts of information is available digitally? Why are we quick to judge people for false pretension, for name-dropping? Why are we lacking trust? Perhaps there is a problem in communication, where lived; experienced; consciously assimilated knowledge is different from a memorization machine that has an efficient motor for intellectual awareness but lacks embodiment of the ideas it hails. I cannot say one is better than another, but can ask where and why– in an art world that embraces multiplicity and inclusivity– do we draw a line between ‘us’ and ‘them’? What does it mean to break (into) a hierarchy whose language one has not necessarily had the privilege to learn?

Abi Tariq is a Karachi-born Paris-based conceptual artist currently investigating the value of text as an art form. He considers himself undoubtedly a ‘burger’.