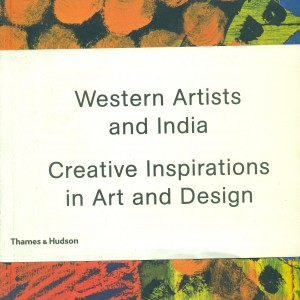 BETWEEN WEST AND EAST

During the reign of Akbar, the Great, European envoys came to his court and brought gifts for the Mughal Emperor, which included European paintings among other things. Some of these were copied by Indian painters – to such extent of excellence that Europeans failed to distinguish between originals and their reproductions. But more than just preparing replicas, elements, figures and subjects were incorporated in Indian miniature and on the wall paintings of Mughal palaces and forts. This was the earliest contact between East and West in the realm of art on that level. A dialogue that continued later, flourished in Company period and become dominant during the British rule in India.

The second half of nineteenth century witnessed that link on more firm grounds, with art institutions built in different cities of undivided India, including Calcutta, Madras, Bombay and Lahore. These schools were designed to train the offspring of local artisans, into indigenous craft as well as introduce them to the aesthetics of Western art. In their essence, these places were not much different from the Fort William College, established to preserve native tongues, folk tales, and vernacular literature, besides encouraging a scientific and rational mode of thinking and objective style of writing.

These attempts produced generations of creative personalities who travelled to Europe – especially England for acquiring a first-hand knowledge or education in arts. If one counts, majority of leading artists have studied in the West, thus bringing influences to formulate a local, national art. So, like the English language, modern art of the West also became a vocabulary mostly employed, if not easily understood here.

But what was the other way traffic like? Apart from minor artists and instructors, who came from the West to this part of land; and more importantly, not in the capacity of superior professionals but as contemporaries, dealing with similar issues and concerns – and often using the identical imagery and mediums shared by their counterparts in India. This is a question, often invoked but never satiated, till the publication of ‘Western Artists and India: Creative Inspiration in Art and Design’ by Thames & Hudson. Edited by Shaney Jhaveri the book presents texts and images of/about Western artists’ interaction with India. In her introduction, ‘Is it Still Referred to “Going Abroad”?’ the editor quotes Jawaharlal Nehru: “…not go abroad in search of the past, go to foreign countries in search of the present. The search is necessary, for isolation from it means backwardness and decay”.

The leader of new Indian nation’s saying set the tone of Indian art’s encounters with the West – or other way around. As the book offers examples – in the form of words and pictures, how the mainstream Western artists were creating works based on India, not in a touristic tone or as exotic venture, but accepting India and themselves being part of the same world. So, one is surprised, yet not astonished to find Isamu Noguchi’s plaster head of Jawaharlal Nehru (1949) or pictures of John Baldessari in studio The Retreat at Ahmedabad (1992), Robert Rauschenberg producing turmeric-infused paper-pulp “mud” multiples for Gemini Gel at the same studio, The Retreat in Ahmedabad (1975). Like these one of the most intriguing image in the book is a photograph of Clement Greenberg speaking at an opening at the Lalit Kala Academy in New Delhi (1967).

The book also mentions close association of modern and contemporary British artists with India and Indian artists, for instance Howard Hodgkin, who travelled frequently to India, collected Indian miniatures and made paintings about the atmosphere/feel of India. “Judy Marle’s film on Howard Hodgkin, In Conversation (1981), made for the Arts Council, contains footage of Howard Hodgkin in India, sipping tea at Irani cafes, viewing Indian miniatures and wrapped in discussion with (Bhupan) Khakhar at his home.” Answering Jhaveri’s question about the relationship between his work and his admiration for Indian miniatures, Hodgkin replies “People tell me I refer to the Indian convention for the sky in one painting [Bombay Sunset, 1972-73], but I can’t see that. Perhaps my collection and my work share the impact of India itself” Another known British artist Timothy Hyman, “a good friend of Hodgkin, also made his way to Baroda as a visiting professor”. The result of that sojourn is Around Bhupen, an oil on canvas by Hyman (2009).

Along with these famous figures, there have been a number of other artists who have intimate ties with Indian art and Indian aesthetics. One among these, certainly the most celebrated, is Francesco Clemente. He has used the imagery, idiom and expertise of Indian miniature painting to create works which may appear in the format of traditional miniature yet in their sensibility convey the code of contemporary art: open, multicultural, and all encompassing. However, this is one example in which India shaped the work of a major contemporary artist, because in the case of Frank Stella there is synthesis of both in The Indian Bird Maquettes (MOMA, 1979).

Probably the most interesting part of the book is about books, the series Hanuman Books, which were “founded by Raymond Foye and Francesco Clemente in 1986, following a visit to India”. These small publications are not about India but suffice texts by artists like David Hockney, Francis Picabia, and Max Beckman. These booklets are not much different from Richard Long’s project with warli artist Jivya Soma Masha on an earth work north of Mumbai (2003). Which reminds and reaffirms that when it comes to art cultural expressions and national identities are mere details, not the essential facts or factors.