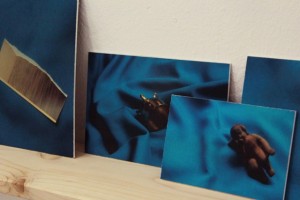 Berlin’s various independent art spaces constitute a crucial part of the city’s vibrant contemporary art scene by allowing experimental formats, concepts and positions. One of these project spaces, which invited Karachi based Hajra Haider Karrar to curate an exhibition this September, is uqbar. The space is run by Antje Wetzel, who is engaged in discourses around migration, mobility and cultural memory. It is located in Wedding, which is an area that turned into a working-class district at the end of the 19th century. After World War I it was known as “Red Wedding”, and became the western terminus of one of the first refugee tunnels dug underneath the Berlin Wall after the post-World War II division of the city. Today, the wall and tunnels have gone, and the population of Wedding is one of Berlin’s most diverse. However, new divisions risk emerging due to the city’s refugee politics and the relocation of camps from districts like Wedding to the outskirts of the city.

In this context, Karrar’s exhibition “AFTERIMAGES: OF ERASURE” brought together two artistic positions that speak about lost histories by examining fragments that represent different sites of deconstruction and bereavement in Berlin and Karachi.“We seek not our origins but a way of figuring out what we are from what we are no longer.” – a quote by Pierre Nora that Karrar used to frame the exhibition’s questioning of reverberations of the past in the present. Her curation brought to light the connection between Berlin based artist Sonya Schönberger and Karachi based artist Fazal Rizvi, two artists whose work has never been shown in the same space, by focusing on their shared practice of collecting and documenting material from sites of what one could call “cultural archaeology”.

Schönberger’s artistic investigation is informed by her background in social anthropology and leads her, in Karrar’s words,“to excavate historical narratives through oral histories and objects, filling the gaps in inherent history to complete the present narrative.”The photographic series shown in “AFTERIMAGES: OF ERASURE” comprises nine details of leafless trees from a worm’s eye view that exude a sense of cold winter calm. Developed with an Agfa box camera– itself a medium of a post-World War II era –these photographs document trees which were planted in the 1960s “to create a new veneer to conceal the scars of the past”, as Karrar poetically formulates it. The title of the series, “Despite the Rubble”, reveals the story that lies behind: The formerly largely flat topography of the city of Berlin changed in the aftermath of the war. The so-called “Trümmerfrauen” (literally translated as rubble women) had to tear down the ruins, all the way to single bricks that could later be used for rebuilding. The remaining debris and rubbish was not only used to fill up holes in the streets but also to create rubble hills, which were ultimately reforested. Schönberger revisited several of these hills in and around Berlin,where she conducted interviews and collected shards of objects resurfacing from the soil. She concluded the research process by looking up at the trees – living organisms that have not known loss or destruction during their lifetime. What we can’t see in these images are the trees’ vital roots that anchor them in the ruins, and in memories of the past – a simple but strong imagery. Documenting the 50-year-old trees with a 50-year-old camera seems almost like time travel; due to the medium, the colours slowly fade alongside the memories.

On the other side of the exhibition space,Karrar presented Fazal Rizvi’s work, creating a dialogue between the two positions. Rizvi’s “When They Come for the Mountains, They Come for Our Homes”presents an array of sharp images on a shelf-like construction on the wall, documenting household objects and debris found on the site of Kati Pahari. Photographed on a vibrant blue background that looks like silk, these objects are lent a new light and turned into precious archaeological finds, speaking simultaneously of a very recent past, and of the present.The site of the ‘cut mountain’ stands for the everyday danger of demolition and destruction, poetically described in an Urdu-English text that is woven around the photographic work and presented next to the photographs as a beautiful leaflet: “So these grains of sand have told us as to why those rocks in the north are being broken into smithereens. They have heard that some people had started pelting stones over the slightest offence (…) And that is why they have broken all those mounds of rocks down to dust. No rocks means no pelting.” For Rizvi though, preserving fragments of the demolished remains and documenting the changes in these sites becomes an act of resistance and protest against these erasures caused by urban regeneration.His work is an on-going exploration of Karachi, drawing a connection between land and sea. The second of his works in the exhibition, “The Sea by the City”, is another attempt of preserving the fading present, in danger due to rapidly expanding land reclamation. The lone characters drawn on off-white paper by typewriter – again a medium of the past – become his visual language,used to restrain the fluidity of an infinite wave, a word that in Urdu also means whim, emotion or ecstasy. The disappearance of the wave (“maujheenarahi”) consequently becomes a moment of mourning, and the spectator becomes a stakeholder in the narrated situation.