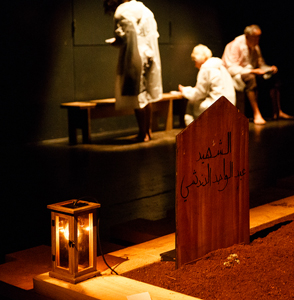 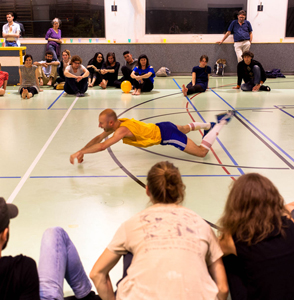 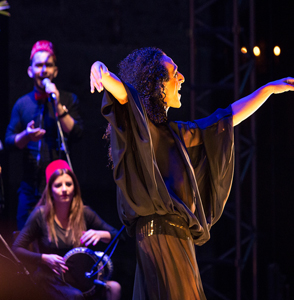 It was during the first quarter of this year that I received an unexpected email.  It stated that I had been invited to take part in the ‘Watch & Talk’ program of the Festival Belluard Bollwerk International in Fribourg, Switzerland, with the only condition being my availability for ten specific days in the summer. This was surprising and exciting news as I had not applied for this particular program (there wasn’t an open call for the Watch & Talk) and, since post-graduation my practice had revolved around creating and writing on art, this promised a welcome change. To be honest, I was fairly unaware of what a ‘Watch & Talk’ program entailed. Thus, over the next few months, began an exchange of many, many emails with the Belluard team.

A Watch & Talk program is one of the many examples of residency opportunities that exist all over the world. As many are aware, residencies invite people from the arts, or creative fields, for a particular time period to a space away from their usual environment and obligations. They commonly provide a time of reflection, research, presentation and/or production. However, there is no single model, and the expectations and requirements vary greatly.

It was on the 22nd of June that I reached the beautiful Swiss town of Fribourg, courtesy Migros Culture Percentage and the Belluard Festival. Fribourg is a small town and accessible only by railway, and the Belluard team left no stone unturned in terms of hospitality; they had assigned assistants (whom they referred to as ‘guardian angels’) to pick us up from the airports of the respective cities we arrived at, and journey with us by train back to Fribourg. Apart from me, seven other emerging artists were invited (out of which six could make it) for the duration of the festival. This included, apart from Pakistan, creative individuals from the Philippines, Cuba, India, and Switzerland itself (particularly Lausanne, Zurich and Fribourg), while we had a moderator who was German.

As I looked out of the window of my room, the beautiful cobbled streets greeted me with promise. And the next few days were a testament to that; onwards began a journey of meeting new people, exchanging ideas and perspectives, watching many, many performances, participating in workshops, exploring the city, and, most of all, creating new friendships.

As a contemporary arts festival, Belluard Bollwerk International was launched 1983 with two main venues, the Belluard (a former artillery fortification built in 1490) which gave the festival its name, and the Ancienne Gare (old railway station). In the context of the historical, beautiful site, the performances at the Belluard exuded layers of meaning and history, making the entire experience more immersive and awe-inspiring. What we perceived over the next few days were installations, exhibitions, concerts and performances loosely or directly tied with the festival’s theme of ‘Living Traditions’. These included Tamil opparis (hired mourners), orchestrated cowbells in scenic farmlands, amateur dramatics, oriental dance, folk dance, experimental dance, the chants of fans of local ice hockey teams, opera singers and dialogues via famous pop songs; all in interesting, often surprising and varied contexts.

What struck me, and also helped the artists and participants to integrate and feel at home, was the intimate scale of the Belluard festival. Moreover, the festival centre (arsenal), where we had many of our ‘Watch and Talk’ meetings during the day and sat together till late at night after the performances ended, was a welcoming space that encouraged interaction and the experience of community. To me, it felt like I was back in art school with a set routine (structured, yet casual) where we watched performances at night, reflected upon them the next day with our moderator, and hung out together in our free time.  In the evenings, the arsenal was transformed into a cafeteria where we all ate together. My taste buds relished the often-unfamiliar dishes cooked in rich Swiss cheese. One day, my Indian friend and I were surprised and excited to find ‘Palak Paneer’ on the menu. Also, with the help of our local friend and participant Alain, we were able to discover the scenic treasures of the local Swiss landscape and learn about Fribourg’s cuisine and culture.

One of the many highlights of the festival was watching Alexandre Paulikevitch from Beriut perform the incredibly sensuous baladi, a more intensive version of belly dancing which he learned in France and Egypt. He was the first male I ever saw perform this, and via his work, he defied traditional gender roles (among other things). Fortunately, we were able to learn from him the basics of this thousand-year old art form at a workshop, though us stumbling ‘Watch & Talkers’ were far from grasping the grace and astonishing bodily control he possessed.

Simon Mayer from Vienna taught us Schuhplattler (literally shoe-slapping) – an Alpine courtship dance performed exclusively by men. However, he reinvented it by including females in his workshop, and experimented with us with yodeling and traditional clapping rhythms. This was incredibly fun but also challenging; it was a test of bodily strength and rhythm, and by the end of it our thighs were red with the constant slapping. Watching Mayer perform twice at the festival, whether solo or with others, was also a treat, as he demonstrated dexterity and skill. His pieces seemed to speak about power and conflict, as well as various stages of the human condition.

Tania El Khoury’s touching sound installation asked each of us to literally put our heads to the hearts of (mock) graves and hear the personal stories of deceased Syrian activists through the earth. While we were absorbed in the narratives, flowers were thrown upon us, bringing us alarmingly close to the notion of death. At another interactive performance, Phillip Wicht introduced the audience to the horrors of his Prom by including us in the immersive (and initially cheerful) environment of his ‘special’ day; only to be rendered sinister by developments in narrative and an unexpected ending, which he orchestrated with the aid of film and theatre references.

There was also ‘Bring Your Own Record’ by PME-Art where the audience was asked to play a favourite song or record and talk about it. I wasn’t surprised when, upon playing Nusrat Fateh Ali Khan’s song, people came up to me and expressed their reverence for his music.

In the words of the festival, as ‘Watch & Talkers’, we were able to take some time out to reflect upon and question our own practices, to embrace the new, to open up to others, to discuss artistic projects, to network, to disagree and to agree. Our daily meetings would consist of recollecting and describing the exhibitions and performances watched the previous night, followed by exchanging opinions and perspectives about them. Since we came from such diverse cultures, backgrounds and practices (visual art, performance art and theatre), our discussions with each other, as well as with the participating performers (as part of the ‘Meet The Artists’ segment) helped us open our minds and form connections in ways unexpected.

On the day after the festival, when everyone had left, I looked out of the window of my room as I had done upon arrival. The view was the same, yet strangely unfamiliar. It was then that I realized that our impressions of places are created by the people present in them. Bidding farewell to the beautiful town of Fribourg was bittersweet, but I knew I was taking with me memories that would last a lifetime.