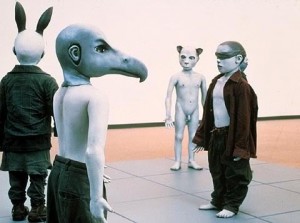 Becoming Animal was the title of the exhibition at Massachusetts Museum of Contemporary Art held in 2005 but the catalogue, as is the purpose of a catalogue de raisonne, is a reminder of this monumental show that brought together 12 artists in a thematic paradigm that investigated the unique and sometimes bizarre relationship between man and animal. Curated by Nato Thompson, the catalog, strangely sub-titled Contemporary Art in the Animal Kingdom, contextualizes the premise of the kinship between these disparate yet analogous species. The title issues from the commentary by Deleuze and Guattari in their seminal book A thousand plateaus: Capitalism and Schizophrenia (1980) in which the verb ‘becoming’ in reference to the human and animal species transcends its literality to allude to a syntax which involves taking on a life of its own; of becoming aware, desiring and then transforming.

To expand the concept, Thompson says in the catalogue “We are becoming animal in more ways than one. The clues are in the air, the sea, our genes, the TV, even our breakfast cereal. Somehow while we were cleaning the house, and heading out to work, the separation between human and animal diminished from an absolute biological distinction to an increasingly delicate web of ecological, social and personal relationships”

But Thompson is insistent that we view the relationship as amicable not fearsome as depicted in popular horror movies like The Fly and “focuses on empathetic and sympathetic approaches to hybridity rather than those conveniently fear-laden” He references Beuys’ as the founder of the only political party for animals which Beuys claimed had over 1 billion members, and his performative piece in which he carried a dead hare in his arms and explained the art on the walls to it. Thompson writes “The distinction between death/life, human/animal were to Beuys barriers to pass through”.

The artists in the show included a roster of artists whose sensibilities drive them towards the animal kingdom with a resonance that seems as personal as it is social or political. Jane Alexander’s work consists of photomontages of dream-like landscapes inhabited by beasts, human and in-betweens. Rachel Berwick presents an installation titled Lonesome George about the diminishing fortunes of the Galapagos tortoises. The Japanese artist Motohiko Odani created a taxidermied baby deer with all its legs in steel traction as if to heal its broken limbs but suggesting torture through science rather than a healing hand. Perhaps the most intriguing of all the installations recorded in the catalogue were the part mythical, part sci-fi “formations” by Australian artist Patricia Piccinini. She uses silicone, fiberglass and human hair to fabricate fleshy transgenic creatures that come with embedded narratives by the very virtue of their existence. One is a female dog-like creature with pink human skin and long ears who reclines serenely while her offspring suckle vigorously on her teats. Some of the creatures are menacing and threatening and have teeth and fangs but they are not fearsome. Some cuddle in bed with human children. These creatures offer an ontological debate about the human condition and present emotive and social perspectives on the ‘other’.

The catalogue/book Becoming Animal is a reminder that though art shows may end in weeks or months, their legacy can be retained for many years thereafter.

ArtNow would like to thank Irfan Hasan for the loan of the catalogue Becoming Animal.

One Response to Becoming Animal