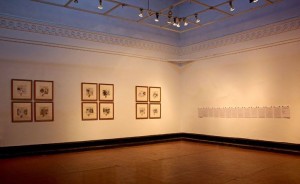 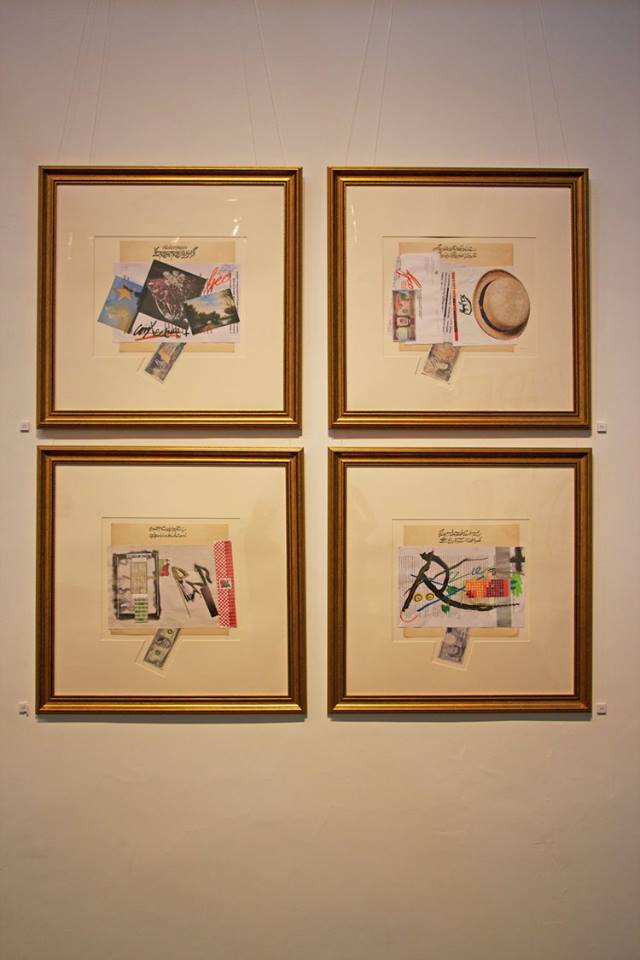 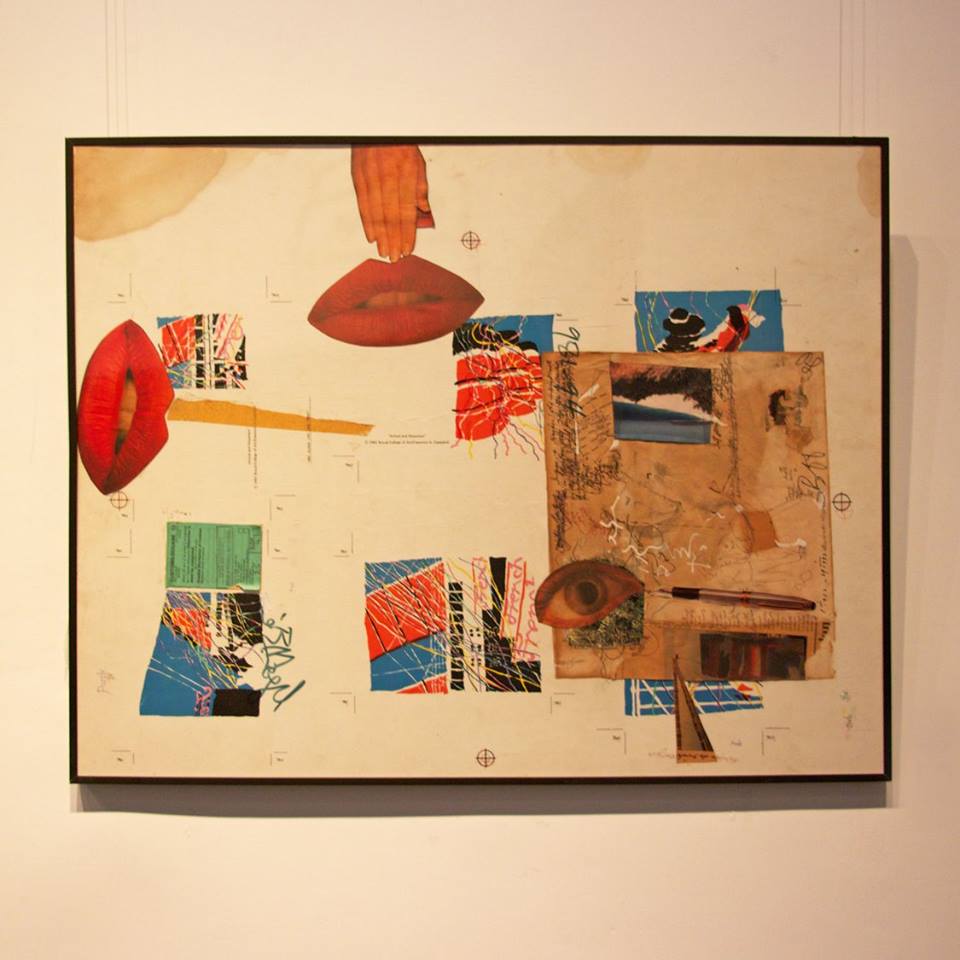 Images and texts are two sides of the same coin: they compensate for each other’s absence by telling the tale for the other. But the story becomes much more interesting when both mediums narrate a tale side by side as each fills up crevices or fissures left by the other, making the whole more complete, more enjoyable. This rendezvous generally takes place at the artist’s den where the text finds its illustrations after leaving the desk of his writer. But sometimes the entire encounter springs up simultaneously as a result of an artist’s inspiration. One such instance in the history of western art was Cubism where both elements were juxtaposed resulting in collages, initiated by Pablo Picasso and George Braque. Cubism provided various vantage points of a singular objects as opposed to a singular perspective. Gradually this technique became one of the most favored by artists and art practitioners around the globe. Russian posters for politics and propaganda by El Lissitzky, or Raoul Hausmann the German artist’s collages, texts and images worked side by side providing various vantage points marking social protest and resistance.

In Islamic art and art of the subcontinent, text has always carried the banner of visual arts whether standing alone or accompanied by illustrations or illuminations. Pakistan since its inception has been fortunate to have had produced some of the finest calligraphers of the world. Sadequain is one such celebrated artist whose service to calligraphy as an art form is immeasurable. One aspect of his contributions is that he reestablished the broken link of poetry and visual arts in the twentieth-century modern art in Pakistan. His paintings featuring Ghalib, Iqbal and Faiz’s verses reinvigorated the lost appeal for Urdu and Persian poetry and reintroduced the new generation to its forgotten legacy.

Another remarkable deed of the great artist has recently surfaced – almost thirty-five years ago he presented his calligraphic works of Ghalib’s poetry to another well-established artist, Iqbal Geoffrey, with the intention that they be incorporated into the latter’s works of art (Geoffrey, possessing two angles to deal with life, is a visual artist and a lawyer). After two decades of deliberations and mediations, he has created a series of collages that were recently exhibited at the Zahoor-ul-Akhlaq Gallery in Lahore, titled Be:Cause. Living up to his reputation of questioning the status quo and his revolutionary thinking, these twenty-three collages are an attempt to make waves in a static and stagnant money-infested society.

In all the works except one there is a preplanned and intentional placement of Gahlib’s poetry: it is on the top of the collage. Cutouts of various global currencies are deliberately placed in the lower sections of the compositions while the rest of the images and texts are placed in the space in-between. This hints at the notion of why art, literature and poetry should supersede money. It’s like a muted shout that money should not be a priority for artists instead of creativity and that art must not become a commodity. Geoffrey’s collages bring to mind Andy Warhol’s statement that, “Making money is art, working is art and good business is the best art”.

It is interesting to note that one of these collages is different as it neither features Sadequain’s calligraphy or Ghalib’s poetry and that the placement of the currency note also changes from the bottom to the top. Here Geoffrey uses a copy of The Financial Times and crowns it with the currency note signifying a plethora of issues, vices and crises the world witnesses everyday.

The most remarkable feature about his work is that it shows pale, withered pages carrying calligraphy that evokes nostalgia for fading traditional values and a sense of loss, reminiscing over forgotten aesthetics and sensibilities. This element is heightened by juxtaposing it with a cheap quality A-4 paper, bold strokes of vibrant color splashes and newspaper cutouts of local female models. The contrast of rare and precious with the cheap and commercial could not have been communicated more effectively!

Geoffrey presents the two polarities of a society. By using images of female models, rich socialites clad in designer clothes, the swarming images from social media, Pakistani society that is hybrid: it is neither traditional nor does it claim to be fully modern. The artist captures this dichotomy very effectively. The exhibition as Geoffery claims is not simply an illustration of Ghalib’s poetry but has many more layers only to be lifted and understood by an observant eye and a critical mind.

I was both enthralled and confused by Geoffrey’s statement on Zahoor Akhlaq’s official Facebook page under one of its posts about the exhibition: “bangbang, the new art Baungg is that GEOFFREY is the greatest artist who ever walked on earth. Notice the lower case “a” in artist. Caravaggio, Duchamp and da Vinci dutifully agree. Beat your head with the walls and walz joyfully.” As in these comments, Geoffrey’s play with words is equally present in how he maneuvers his images. He places and displaces the words, which completely changes their meaning and the context. To an extent this is a lawyer’s job where they manipulate with words. Quddus Mirza aptly summarized this when he stated that Iqbal Geoffrey’s world is made of and is divided in two halves – words and images, and that these two elements are his world.

In one corner of the exhibition writ files are displayed and the title is “In-justice”. Geoffrey’s choice of words itself deconstructs and re-constructs the narrative. It bemoans the absence of it in the courts and decries its connections with currency. Out of the heap of unresolved writs in the courts, the artist has boldly brought this issue in the gallery space to engage the viewers and visitors in a discourse that may pave the way to force out the “in” for the ordinary and the helpless.

Be:Cause has caused several ignored and unwanted issues to resurface and has also prompted viewers to once again negotiate the cost and loss of this oblivion. Issues solicited in Ghalib’s poetry and the impact of Sadequain’s calligraphy have multiplied in their effect with Geoffrey’s powerful visuals. This exhibition has sown many seeds for ideas of change – a change that Geoffrey’s sarcasm seems to hope and long for – this I shall summarize in Iqbal’s optimistic words hoping for the same: zara num ho to yeh mitti bari zarkhez hai saqi!.

BE:CAUSE by Iqbal Geoffrey was on view from 21st September to 15th October 2015 at Zahoor ul Akhlaq Gallery, Lahore. Images courtesy of the gallery.