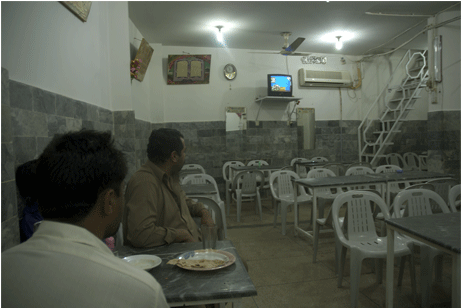 Bani Abidi: Journey of the Narrative

The blue background with a portrait of the founder of the nation on the left and the national flag on the right, flanked by a desk holding a microphone and a flower arrangement, makes for the familiar setting of a presidential speech. The empty chair behind the desk creates anticipation and anxiousness in the viewer, waiting for the speaker to arrive on the set and express his agenda. As an afterthought, one cannot help but recall the number of speakers who have sat in that chair and the different agendas they have announced that now constitute the history of the nation. This is the image which graces select television screens one evening in Lahore.

The viewer’s perception is constantly challenged, questioning if there is more to the visual than meets the eye, while waiting for a flutter of activity to mark the end of the waiting game and the beginning of the speech. After staring expectantly at the screen for a few minutes, the viewer gradually comprehends the pun intended by the artist: nothing will be happening on this set. It is a mere still. During those few minutes, the viewer also realizes that the backdrop is actually a trompe-l’oeil painting reminiscent of the painted backdrops traditionally found in portrait studios in South Asia.

The Address by Bani Abidi is a Diasec C print which was shown on television screens in select public spaces including chai khannas, the television market and barber shops in Lahore. Abidi’s considered screening of this work emphasized the potential and flexibility of the medium and the importance of the site in determining the reading of the work.

The commissioned background painting with a curated ensemble of found objects makes for a carefully orchestrated set resembling broadcast presidential speeches. It is then translated into a photograph and shown on television, feigning a recorded telecast. This work gives new meaning to the medium of photography, which has been stretched to the function and limits of video by being displayed on a television screen, long enough for the viewer to realize and understand the premise of the work.

The location of screening is another central decision taken by the artist in determining the way the work is perceived. The white cube predetermines the expectation of reading of things within it as art; where the viewer is preconditioned to look beyond the visual in search of an underlying deeper meaning. Meanwhile, in everyday life, people are accustomed to unpredictable events, particularly in regions where institutions and infrastructures tend to break down; here the absurd is accepted as a result of dysfunction becoming a kind of mainstream occurrence. The thin line between reality and fiction is blurred when Abidi’s work is shown in public space as opposed to the white cube. The spaces selected by her are everyday meeting places, consciously not used for displaying fine art yet sites of communal  conversations and discussions.

Presidential speeches in Pakistan have historically given rise to speculation and debate on the country’s upcoming future. There are usually two occasions when the need for a presidential speech arises. One is when a new president is elected and addresses the nation for the first time and the second is in the case of grave news like outbreak of war. The Address was screened during the regime of a military dictatorship – a time of suspension and deferral, where a democratic government was unexpectedly overthrown. This temporal backdrop further alerted the viewer to focus on what is to come rather than the image on the screen, testing the viewer’s perception which is tinted with familiarity, association and memory.

The Address is one in a long series of video and photographic works that play on notions of memory and association and the relationship between citizens and power hierarchies. These carefully constructed fictional moments and narratives constitute Abidi’s oeuvre. Her practice is embedded in narrative form and language, inspired by everyday life in her surroundings. Her observations home in on the contradictions in cultural, traditional and religious practices and notions of modernity found in the social structures in South Asia. The tendency of systems failing and the concoctions of alternate routes of function prevalent in this region give birth to the element of unpredictability in everyday life, where the absurd is an eventuality and a reality, making fictional narratives believable and possible. By putting her finger on the pulse of this intricate web and stretching its potential, Abidi raises these details to a different plane where they are seen enlarged outside the context, enhancing their absurdity.

Abidi, initially trained in painting, switched to video as a medium when she felt the former became limiting to her ideas. Among other things, this medium allowed Abidi to include the dimension of time to unfold her narration of ideas. It was the prolonged exposure to film during her time at the School of the Art institute of Chicago while pursuing her MFA, that made her realize the potential of the moving image and other time based forms, directing her attention towards video as a medium. She started working with video right after her graduation.

It was in 2006 after she had produced a few works with detailed stories that she advanced to exploring the abstraction of the image. There is a natural shift between video and photography in her work which comes as a natural consequence of working with video. Her photographs are orchestrated and invested with the same kind of planning, and compositional qualities and sense of atmosphere as in her videos, such that they often seem to be video stills. Both her videos and photography express extreme control of the narrative, frame and formal location of things.