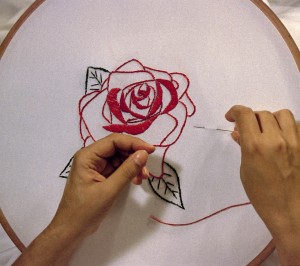 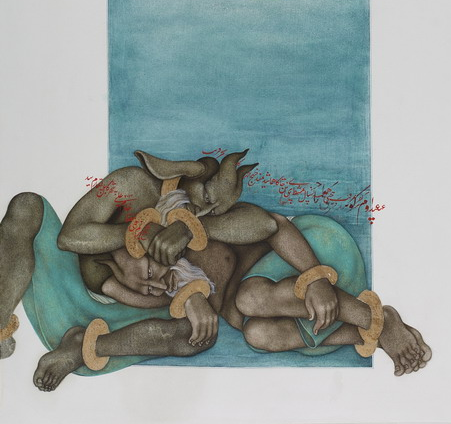 The act of creating contemporary art has challenged set norms of image making. Indian miniature painting, for instance, has emboldened via compositional and material changes that have been added and/or subtracted from its rigid historical traditional format by artists in Pakistan. Video works and installations have, similarly, challenged our assumptions of what moving images are meant to be; contemporary video has increased human interaction with art through its distinct technological and artistic interventions. In such a context, the show “I Love You” at AAN Gandhara Art Space in Karachi unites selected contemporary artworks; the statement for the show emphases on “oft repeated words from our vernacular” that lose their original meaning due to excessive repetition. Over-used thus sentimentally weak yet not defunct, such phrases (the titular I Love You is one instance) have lost their appeal and thus the displayed works chosen from AAN’s collection will drag your attention to this phenomenon. Curated by Malika Abbas with Amna Naqvi as curatorial adviser, the show’s inclusion of internationally renowned Pakistani artists will easily compel you to visit the gallery. The burning question you will leave with is, however, how these works that were made in different media, by different artists, in different years, were chosen from AAN’s collection to co-exist in a curatorial premise that aims to expose the over used vernaculars and discern language’s meanings.

“I love You” appropriates its title from Bani Abidi’s video of the same name from 2003, now on view at the gallery. Abidi has shown video works to huge international critical acclaim since 1996. Often, Abidi engages with South Asian culture and regional dynamics where her installations focus on social relationships, politics, shared histories and post-colonial satire. In the video, you may assume it is the artist who picks small, hand-held booklets from a box, one at a time; each booklet contains numerous portrait images of important Pakistani artists such as Imran Qureshi, Asma Mundrawala, and Aisha Khalid among others. As Abidi’s hands quickly shifts the pages of each booklet the portraits of the artists move to silently pronounce the phrase “i love you”. The manually and individually controlled movement of the booklets is conspicuous; it allows the phrase to be spoken hence handing the artist the agency to create the phenomenon in the first place. As the video progresses, the phrase sounds banal as each character portrayed in the booklets repeats the same words. The excitement that was caused through the action of shuffling the pages and watching its protagonist unfold the words shrinks toward the end of the video and that is thus Abidi’s success; reflecting upon utterance, shared dialogue, and lost meaning.

Renowned contemporary miniature artist Imran Qureshi’s They Shimmer Still was first shown at the Biennale of Sydney in 2012; the work was then massively disseminated all over the floor in what appeared to be red pools of spilled blood. Close glances revealed the patterns to be that of floral arrangements. Similarly, this work from AAN’s collection reflects upon the chaos between beauty and violence, a theme that runs through Qureshi’s many miniatures. The wall installation with the same title is a dual part work, a unique blend of traditional materials such as gold leaf and contemporary acrylic paint. Two egg-shaped forms are layered with gold leaf paper; each dripped and splashed with red paint that begin to reveal from the left side of the works. You might intuitively consider the red splashes as blood. With deep dark layers and seemingly “unintentional” forms that have in fact been created with prudent attention to detail and precise formal judgment, Qureshi achieves careful abstraction yet representation of the fusion of violence and beauty by mixing an abstract details such as red paint over a fine and meticulously crafted surface.

A floor installation by contemporary artist Anushka Rustomji has specifically been created for the show. Here and Now is a work made with chalk that inspires and learns from an actual post card scribed in Gujrati and sent by the artist’s grand mother to her sons (Rustomji’s father and uncle), now preserved as family memorabilia. Brought to life again through Rustomji’s re-creation, the installation reflects upon social relationships, the important of language and its erasure through time and decay.

The show also includes works from contemporary miniaturists such as Aisha Khalid (Conversation I. 2001) and Khadim Ali (Haunted Lotus, 2013). Though the exhibition includes legendary artists from Pakistan, it doesn’t come full circle as you will be left inkling for more in the form of either a sense of “open-ended” closure or more works from AAN’s collection that reflect upon the chosen theme. Though splendid in execution and critically important in concept, Qureshi’s work is a little out of context and its inclusion furthers queries as to why these “specific” works were chosen to be represented under the show’s premise. It is, however, the individual strength of the artworks that cements the show thematically, allowing glimpse into art practices of trend setting contemporary artists.