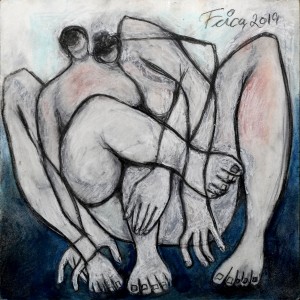 Artistic and Literary Ruptures: An Apology to Shaikh Ayaz

An Apology to Shaikh Ayaz at Chawkandi Art gallery educates and titillates our curiosity about poet Shaikh Ayaz (b. 1923-1997), through works by eleven Pakistani artists who rejoice at the poet’s dexterity and magnetism with Sindhi poetry. Curated by Mariam Mushtaq Kazi and Jamal Ashiqain, the exhibition is clearly an “apologetic” visual homage, as witnessed through artists’ works, statements, and the title of the show. Ayaz has been understood as an authority of literary translations from Sindhi to Urdu language, countless plays, and several biographies, and was recognized with Pakistan’s third highest civil award Sitar-e-Imtiaz; facts that ascertain his colossal contribution to Sindhi language and Pakistani literature. Yet many literates might not be cognisant of his achievements or works. Contextually, the participating artists express their personal lack of recognition of his work, through a focus on Ayaz’s poetic prolificity via their exhibited works that encompass a variety of media that include acrylic and oil paint, dry pastel work, watercolour and gouache, digital print, and steel sculpture..

Artist and curator Alia Bilgrami’s vinyl diptych titled Arey Oh Chanda, Arey Oh Chanda, Mera Mahboob Tun Na Daika Ha displays halos of grey, smoke-like, circular shapes that are mirrored on the adjacent vinyl sheet. Evidently, the moons from the piece’s title, Bilgrami fills the backdrop with hues of black that transcend into a grey tone toward the lower corners of the vinyl. Mirroring the effect of a butterfly’s symmetrical wings, the pieces of the diptych are in-sync to each other’s rhythm and flow. Bilgrami uses Ayaz’s poetry, to possibly mirror lyrical delicacy of his verses through contemporary art media.

Abdul Jabbar Gul presents his ode to Ayaz in the painting Shaikh Ayaz, created with oil paint on canvas. A prolific sculptor of wood and metal, Gul paints with bold calligraphic imagery. Two broad rectangles within his painting are situated; each vertical and horizontal respectively, to cross each other out. Their point of juncture visualizes the poet himself, whose face is layered upon another oval shaped form. Gul mysteriously fills the rectangular cross with lettering and numbers in Urdu, enthralling the viewers to think about numerology and symbols. Shades of blue and warm-washed red dominate the painting, with lower areas on the cross, mimicking tones of green. The work is clearly directed at the poet, whose literary oeuvre in Sindhi resonates deeply with Gul.

Aqeel Solangi’s painting uses similar tones of blue and that mingle with some red to create a mesmerizing effect on canvas. Well familiarized with Ayaz’s poetry along with other notable poets such as Faiz Ahmed Faiz and Shah Abdul Latif Bhittai, Solangi’s work has often taken inspiration from poetry and local literature. In Raat Aj Kaee Abad Taeen Hale, Solangi visually quotes Ayaz from his verses that discuss spirituality that transcends toward an eternal time.

Zohra Amarta reflects on Ayaz’s poetry through a single image in her painting. Titled Gull, Amarta’s image of a red rose in gouache stands boldly on wasli. While roses have stems filled with thorns, Amarta’s visualization of the stem is smooth. While the petals are pristine, verses from Ayaz’s poetry are stamped neatly around the stem, completing the painting in shades of blood red and green. Other artists in the show include Mehar Afroz, Feica, Khalil Chishtee, Dr. Mohsen Keiany, Abro Khuda Bux, and Agha Jandan.

An Apology to Shaikh Ayaz is a curatorial project where art takes a conspicuous stimulus from literature. Evidently, the project has aimed to transport Ayaz’s poetry and work into focus, from tunnels of oblivion that much regional literature has sunk into. Many of the artists from the show seem to have creative impetuses to work with Ayaz’s oeuvre due to personal experience and familiarity with his work or having an interest in art that motivates from regional dynamics. Curators Ashiqain and Kazi have also been aware of involving different type of contemporary art media while dealing with traditional regional poetry, a framework that allows multiple viewpoints to reflect through. While their selection contains a pleasant group of senior and mid-career individuals with the right balance of male and female artists, the curatorial statement lacks clarity upon their selection. Why does art need to be apologetic, ever, is also an area that demands further intervention. Yet, the show successfully probes into regional literature; a model that can further be adopted for other creative ruptures in Pakistani art galleries.