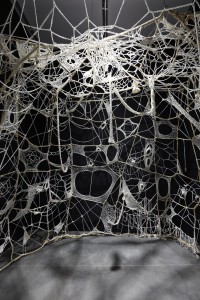 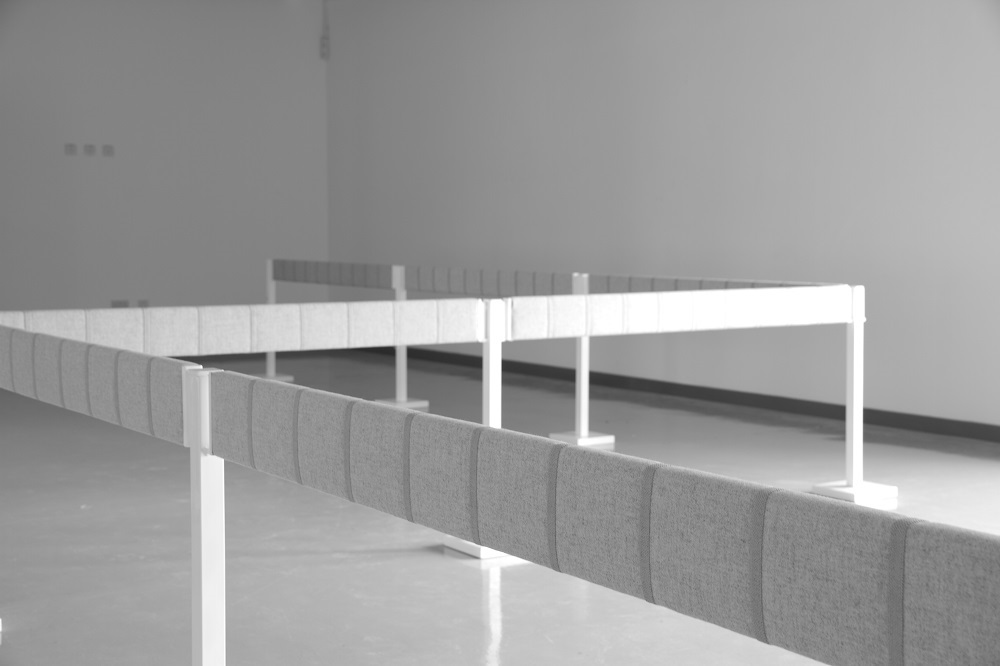 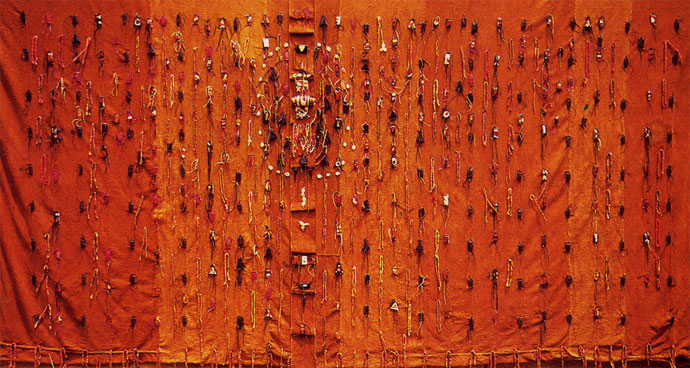 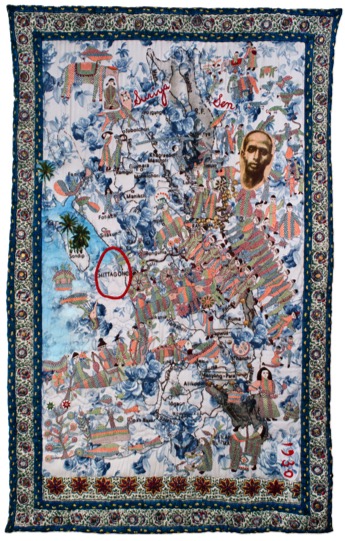 Art_Textiles at the Whitworth, Manchester

‘Art_Textiles’ at the Whitworth in Manchester is a long overdue exhibition putting work made from textiles firmly in the spotlight. The works of twenty-seven artists fill large four rooms of the newly re-furbished Whitworth, supplemented by a small number of carefully selected historic pieces from the Whitworth’s Textile holdings to provide a counterpoint to the contemporary pieces.

Jennifer Harris, the curator (assisted by Amy George), must have had a daunting task to select the exhibits for this stunning show. The exhibition covers a broad time period – from the early 1970s to the present day – and includes works from all over the world. The works on show demonstrate how cloth can be used as both a medium and a process to communicate social and political ideas. As discussed in the catalogue, and stated by Maria Balshaw in her speech on the opening night, “this is a feminist show”.

Feminist working practices in the West in the 1970s collapsed the hierarchy between high and low art, embracing the use of previously undervalued and overlooked processes such as domestic crafts. Collaborative working practices were encouraged and the idea that art could be used for a social or political purpose was embraced. Subject matter frequently reflected women’s lives and experiences.

Thus it is entirely appropriate that ‘Art_Textiles’ includes several iconic works from that seminal time. Womanhouse, a communal project led by Judy Chicago and Miriam Schapiro in Los Angeles was a landmark endeavour; an entire house was converted into an art project exploring and questioning women’s personal and collective identity, utilising unconventional artistic methods and materials. Faith Wilding created Crocheted Environment (Womb Room) (1972/1995) forWomanhouse. This is an ambiguous space: it can be seen as a comforting nest – a room made from textile – and as a trap – the danger of being caught in the web of ‘women’s work’ in the domestic environment.

Miriam Schapiro’s key work Anonymous Was a Woman (1976) reclaims techniques associated with women – sewing, piecing, appliqué – as legitimate processes for fine art. A similar story is told in Lyn Malcolm’s carefully crafted piece, Why Have We So Few Great Woman Artists? (1985). Maxine Bristow also uses meticulous making skills, but in a very different way: recent work consists of a body of unsettling architectural pieces that confound the viewer, including Barrier ref: 9774-14(2005). Minimal and precise in its execution, this intervention in the art gallery quietly questions the value of labour, and the nature of art.

Whilst Bristow’s work can almost be overlooked, there is no possibility of ignoring Magdalena Abakanowicz’ monumental Red Abakan III. This enormous woven piece, three metres in diameter, could have been made for the vaulted main gallery in the newly re-furbished Whitworth, so beautifully does it fill the space, confronting the viewer as they enter the exhibition. The sheer scale of the works in this first room is almost overwhelming with Abdoulaye Konaté’s seven metre longHomage aux Chasseurs du Mandé (1994) calling attention to Mande beliefs and rituals; and Jagoda Buic’s towering, totemic Flexion 2 (1971). Elaine Reichek’s intriguing work moves between the monumental and the intimate, requiring the viewer to closely examine the painstaking embroidered text and reflect on the re-telling of the Greek myth of Ariadne.

The artists in this exhibition all utilise textiles for a variety of different reasons, but always the textiles are integral to the work – what the artist wants to say simply can’t be said by using any other medium. The particular cloth selected can be resonant with meaning; this is particularly true in the work of Risham Syed. Syed is known primarily as a painter, however she makes use of a range of processes and media to bring attention to her subject matter, which often deals with the effects of the past on the present, and issues around post-colonial identity.

Risham Syed created the series of quilts Seven Seas (2012) for the prestigious Abraaj Capital Art Prize, and given the subject of her proposal – the impact of colonial trade – it was entirely appropriate that she utilised textiles to tell this particular story. Each quilt – two are shown in this exhibition – depicts a map of a strategic port city in a different country, including Turkey, Sri Lanka, India and Pakistan. These cities were also sites of resistance against the imperial powers; this is alluded to by the inclusion of photographic imagery and military buttons. Fabrics, embroidery and imagery are layered to create complex works that invite considered reflection. The base fabric prints reference Victorian Britain, and the use of indigenous fabrics locates the works more specifically within particular regions. Hand-stitched kantha figures have been released from their original incarnations to dance across the surface of Chittagong Hill Tracts. The backs of the quilts have also been made from appropriate local fabrics, adding another layer of meaning.

Anne Wilson’s unsettling works in this show (Mourning Cloth, 1992-3 and Dispersions 27, 28, 31, 2014) are of a more intimate scale, with human hair stitched into domestic textiles, inviting both repulsion, and a desire to look more closely, disrupting notions of the domestic and the body. However I would have welcomed the inclusion of a film of one of her performance pieces such as Walking the Warp. Kimsooja’s intriguing piece Sewing into Walking – Kyungu (1994) was the only film or video work; the inclusion of other performative and collaborative pieces would have enhanced the exhibition.

Despite these criticisms, this is an arresting exhibition, providing a welcome opportunity to see work from across the globe by both established and emerging artists. There is room here to mention only a handful of the artists taking part: the catalogue provides a good overview of the exhibition.

Art_Textiles runs from 10 October to 31 January 2016 the Whitworth, University of Manchester.

Melanie Miller is a lecturer, maker, writer and curator.  She was the MA Textiles course leader at Manchester School of Art for a number of years and also taught on the Embroidery undergraduate programme. Curated exhibitions include ‘Mechanical Drawing: the Schiffli Project’ (Holden Gallery, Manchester, and touring) and ‘Construct: eight textile artists explore identity’ at Ruthin Craft Centre. http://www.melaniemillertextiles.co.uk

2 Responses to Art_Textiles at the Whitworth, Manchester