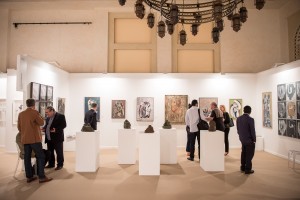 Importantly, Art Dubai’s geographical location and distinctly less Euro-centric slant enables a platform through which to glimpse the creative tempo in West Asia. Indeed, Ms. Carver called it a fair of “discovery” at the inaugural press conference. “If one is building a focused collection of artists from the Middle East and South Asia, Art Dubai is a must visit,” said Sree Banerjee Goswami, director of the Mumbai-based contemporary art gallery Project 88. Ms. Goswami, who was attending the fair after a five year hiatus (she did not exhibit) observed that the fair has “improved tremendously. It is small and focussed and that is what collectors are looking for.”
A bulk of the works on display were priced under $100,000, with many reasonably priced under the $10,000 to $15,000 range. There were notable exceptions, including an Anish Kapoor sculpture at New York’s Gladstone gallery, priced at close to a million dollars, and the Iranian artist Farhad Moshiri work at Dubai’s Third Line, which sold two works for $250,000 and $200,000 each. Most galleries reported healthy sales, although total sales figures at any art fair are difficult to ascertain.

“We found Art Dubai to be a worthwhile and well-run fair; it’s clearly the nexus for curators, collectors and dealers in the Middle East — many of whom we were able to meet, some for the first time,” said Robert Goff, a director at New York’s Gladstone Gallery, which was showing for the first time. “The fair was valuable for us in terms of letting collectors from the region know that we represent artists like Ahmed Alsoudani, Shirin Neshat and Anish Kapoor.”
The Modern section, albeit small, was carefully curated and without doubt the strongest. It had a strong Pakistani presence with artists like were Anwar Jalal Shemza (at Jhaveri Contemporary), Rasheed Araeen (at Grosvenor), Zahoor ul Akhlaq (at ArtChowk), and Syed Sadequain (at Aicon Gallery) on view. Over in the Contemporary section, Rashid Rana was on display (at Chatterjee & Lal and Chemould). Although the number of Indian galleries participating was small (only 5, of which 2 were sharing a booth), all reported strong sales. Kolkatta’s Experimenter, which showed only the young Canada based artist Hajra Waheed, had a sold out booth.

Beyond the hullaballoo of the galleries themselves, there was considerable intellectual stimulation at this year’s talks. Under the rubric of the Global Art Forum, over 40 speakers and contributors participated, including such art world luminaries as Okwui Enwezor, director of the visual arts sector for the 2015 Venice Biennale and director of Munich’s Haus der Kunst, Hans Ulrich Obrist of the Serpentine gallery, the curator Catherine David andAdam Szymczyk, Kunsthalle Basel director and artistic director of Documenta 14.
Most art fairs act as a catalyst for the surrounding region and Art Dubai is no exception. Alserkal Avenue, in the city’s Al Quoz industrial area, is now a contemporary art hub, with 40 galleries, including Grey Noise, Gallery Isabelle Van Den Eynde, Carbon 12, Green Art Gallery, Lawrie Shabibi, the Salsali Private Museum and Ayyam Gallery. Many of the galleries were worth a visit, particularly Lawrie Shabibi, which showed ceramics by a young Iranian artist, Shahpour Pouyan. In response to the growing importance of the arts, Alserkal Avenue is expanding by 250,000 square feet to include more galleries and arts centers.
Perhaps taking a page out of Miami’s book, a city transformed into a regional design and cultural hotspot since the advent of ArtBasel Miami, for the past two years Dubai has hosted Design Days, an increasingly popular week long fair dedicated to limited edition furniture and design objects.
A hop and a skip away in Sharjah, the Sharjah Art Foundation has made a name for itself under the guidance of Hoor Al-Qasimi. (Ms. Al-Qasimi has just been appointed curator for the UAE’s pavilion at the 2015 Venice Biennale). This year the foundation mounted a number of exhibitions and projects including those by Rasheed Araeen, Wael Shawky, Abdullah Al Saadi, Eduard Puterbrot, and Susan Hefuna. Araeen’s show was especially powerful, displaying his sculptures, paintings and drawings over an illustrious 50 year career. A visitor can track his evolution from painting to more formal, geometric sculptures.
With the happenings in Sharjah, the boom in museum building in Doha and Abu Dhabi and Dubai’s growing importance as a regional arts hub, the Gulf is fast throwing off its mantle as just a rich man’s playground into a more relevant cultural force in the surrounding region. Both India and Pakistan should recognize the area’s growing importance in this type of “soft diplomacy.” By laying the foundation for a vital arts community to thrive and as this year’s edition of Art Dubai demonstrated, the arts may well bring together a region long at odds with itself.

Art Dubai ran from 19-22 March 2014.
Gayatri Rangachari Shah is a freelance journalist based in Mumbai