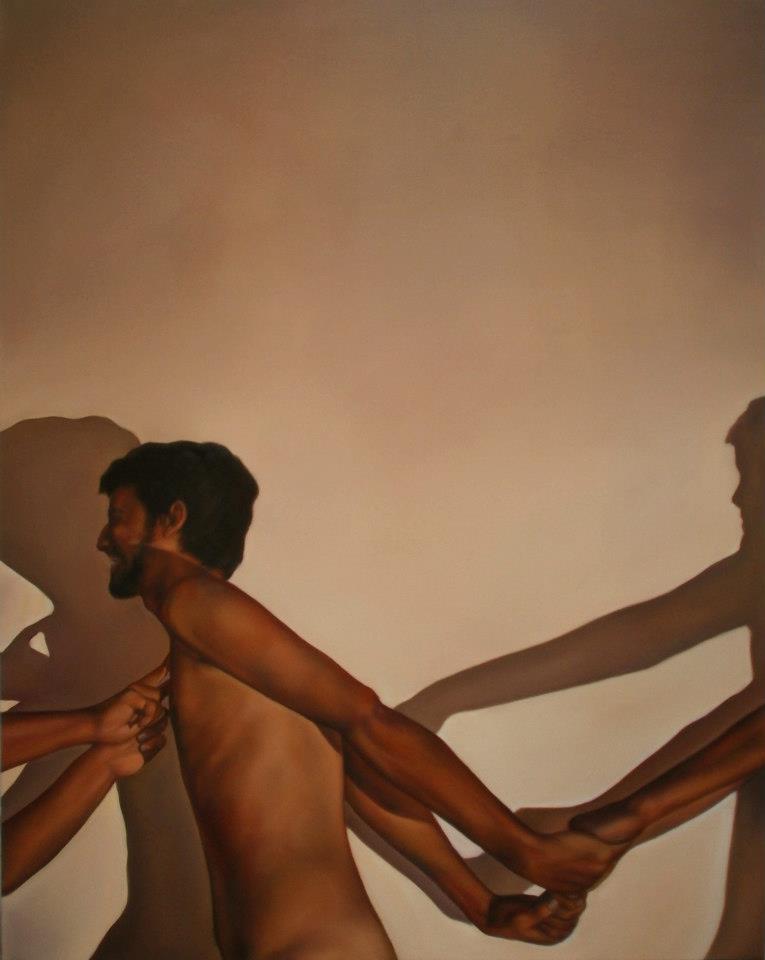 by By Madyha J. Leghari

“Art – A New Approach”, a group show featuring Sarah Hashmi, Dua Abbas, Ali Mansur and Scheherezade Junejo, makes no bones about being anything but that. It has done away with the recent trend of finding an often-forced connection between artists, a practice that is unreasonably defensive and perhaps unconsciously used to justify the very existence of a group show. In such a way, the show is a ‘new approach’, albeit the title remains vague.
Sarah Hashmi draws her references from found family photographs; most of her imagery is evocative of domesticity and half-remembered childhood scenes. However, the processes by which she translates these photographs onto canvas (layering and scratching amongst others) transforms these otherwise innocuous images into visuals pregnant with latent violence. Her straying scratches, for example, are not only consciously directed at figures in a vindictive way but also confer a tonality that makes them appear to morph into a bubbling mass. Similarly, while in the photographs, the figure’s gaze meets the camera in a posed, self-aware manner, in the painting the same gaze (or the lack of it, since Sarah has erased the eyes in many instances) becomes confrontational, and the figures seem to take some responsibility for the viewer’s discomfort.
Dua Abbas uses pastels on paper and canvas to create a series in which young females are cast as heroines. They are heroines and not simply protagonists because above all, Abbas sets out to create a beautiful image and her characters, likewise, step up to the role with their poised body language and sometimes sharp, dramatic profiles. Celestial Gardens and Fruition, both of which are dominated by portraits, almost look like posed photographs against a hanging landscape background.
She identifies a number of stylistic references which inform her images including Art Nouveau outlining, light from Renaissance portraiture and the whimsical character of the golden age of illustration. Additionally, her visuals also have evident similarities with the ideas of Pre-Raphaelites, most notably in her affinity to brilliant color, devotion to detail, the use of medieval symbols such as tapestries and celestial objects, and the idea of nature as a sacred governing force upon human fates. Using the structure of these many styles loosely, she creates visuals that are often based on premeditated narratives: they are frequently born of first dabbling in literature. Therefore, many objects in her images are meant to carry allegorical significance. Nevertheless, despite prior planning, her mark making still retains a spontaneity that is perhaps most apparent in the tension of the curving lines and sprinkling of details that appear as almost careless afterthoughts.
Ali Mansur is clearly fascinated with the male form and the play of light upon it. At this stage, he steps back and refrains from labeling the work explicitly as such. However, it does continue to be meaningful since for the visual artist, meaning is not necessarily dependant on its verbal articulation.
Some of his images are scenes of almost accidental intimacy, as if the protagonists did not intend to land in the frame as the artist chose for them. Deliberate dramatic lighting and the creation of resultant shapely shadows add to the sense of the artist controlling his characters as would a puppet master. Looking as such images, the viewer occupies the position of a voyeur. In other images within the same exhibition, there are scenes of ritualistic punishment inflicted on characters in obvious pain. Here again the shadows add to a sense of being under control though this time it is not the artist who holds the strings but unseen forces that are responsible for meting out judgment.
Scheherazade Junejo also uses the human figure though in a manner quite unlike that of Mansur. Her bald characters appear androgynous and far more conscious of being looked at. In Black Widow, one of them directly engages the viewer with a focused and intent stare. The title of the piece and the exclusion any other figures from this confidential relationship between the viewer and the protagonist lead one to form a femme fatale association with this character.
There is visible elasticity in these bodies and with strategic deliberate elongation the sense of being stretched taut is amplified. The light in Junejo’s works is theatrical and her characters appear to be absorbed in some sort of a performance. In fact, even the sleeping figure in Suspended, seemingly aware of the limelight being cast upon it, is stretched to its most convincing pose. Hence, even a crumpled bed isn’t a private space to which a viewer is being permitted special access but rather a spectacle to which the viewer is given a view from above, as if from a special camera angle.
If one is to identify a unifying characteristic between these works, it is the absorption of these artists with their physical art making processes. Putting aside laden ideas like skill and craftsmanship, one can safely state that the practice of these artists is reminiscent of alchemy.
—
Art – A New Approach ran from 12-19 February 2013 at Ejaz Gallery, Lahore.
Madyha J. Leghari is