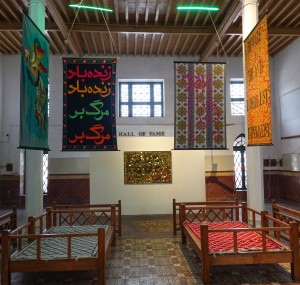 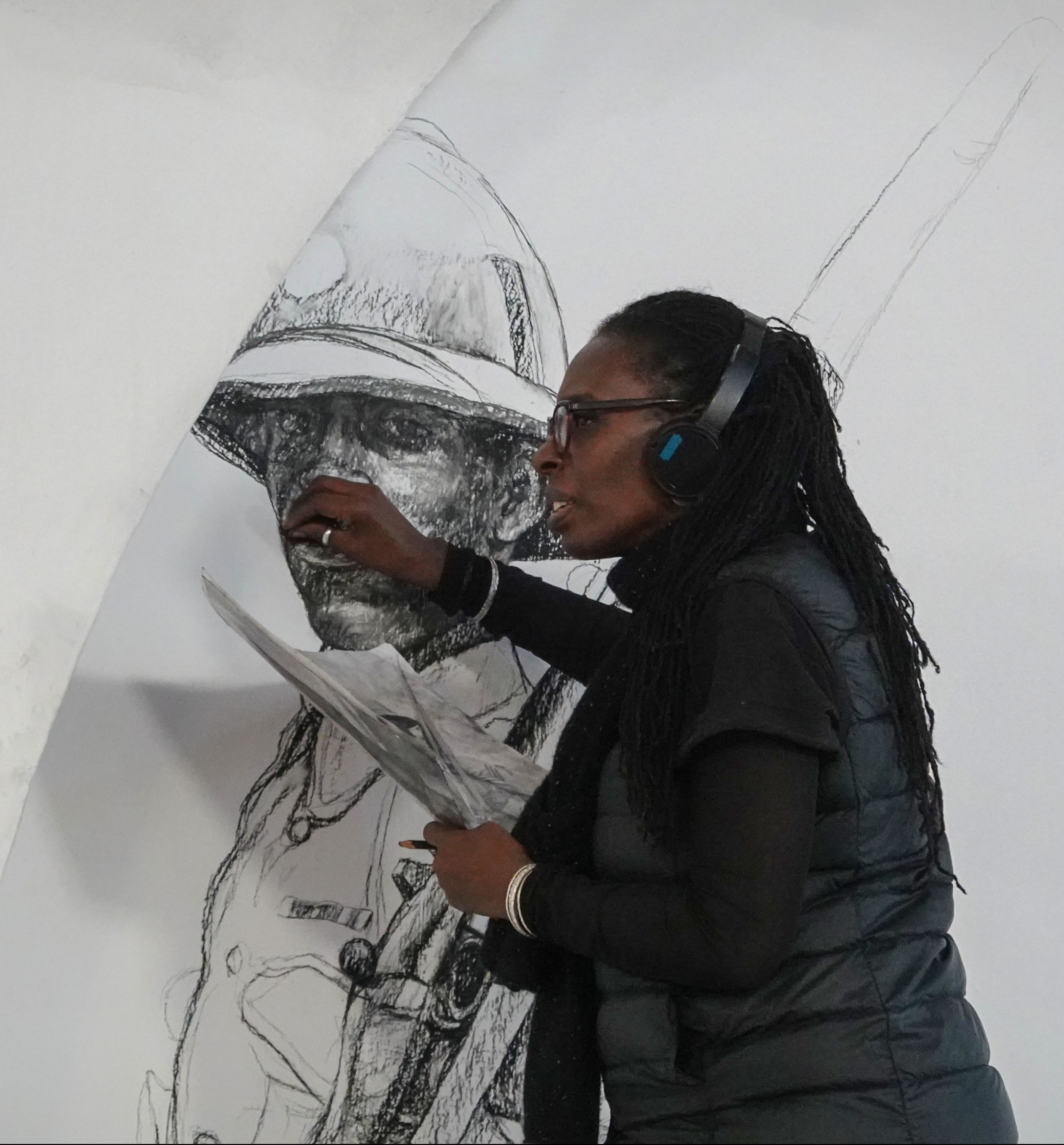 AROUND THE BIENNALE IN 33 DAYS

Jean Paul Sartre wrote “We live in time”; but as there is no singular time (zone) in the world, there is no center of the earth, anymore. The planet has turned global in every sense of the word. With increasing means of communication, information, technology, and market, there are many centers, scattered around the world

Venice Biennale, once a prima donna of international art, is followed by other venues, different and distant cities, which are not landlocked by ‘country representation’. Changing and challenging the notion of nation, observed by Ngugi wa Thiong’o in Secure the Base “…every African community is said to comprise a tribe and every African a tribesman. We can see the absurdity of the current usage, where a group of 300, 000 Icelanders constitutes a nation while 30 million Ibos make up a tribe.”

Now other tribes are also being elevated into nations, for example the art from the South Asia, with Lahore Biennale being the latest addition. The second edition of Lahore Biennale (LB02), curated by Hoor Al Qasimi, spread to 13 different sites of Lahore, a city of Mughal heritage and English colonial architecture, reaffirms the shifting axis of art.

Shifting balance of power, politics, gender and popular idiom are a few points to pick at the Lahore Biennale 02 (January 26 – February 29, 2020). Inviting artists, from the South Asia, Middle East, Central Asia and rest of the world, the LB02 turns into an extended essay of Franz Fanon. You see discourse from The Wretched of the Earth to Black Skin, White Masks, transformed into videos, installations, mixed media paintings, drawings and other formats. Yet the dominating motif of LB02 (with its theme ‘Between the Sun and the Moon’) is a point of dislocation: exile, political circumstances, ethical positions, racial segregation, gender discrimination.

Many of the participants resurrected memories of dispossessed people. Egypt based Basma Al Sharif, in her video We Begin By Measuring Distance, maps the plight of Palestinians, who in the wake of displacement – and in order to overcome ‘The worst of all evil, Boredom’ start calculating distance, between their temporary home to different metropolises of Europe, reaching to cities in the Middle East, and finally ending up gauging the distance between Gaza and Jerusalem. Like any work of magic-realism, length soon turns into the unit of time, showing years, which had crucial and critical value for Palestinians.

There are other distances. Experienced in Amar Kanwar’s video A Season Outside, focusing on the conflict involving India and Pakistan, and showing insurmountable border line between two countries. Tension, drama, farce, and fierceness are several sides of political currency distributed among the population of both republics. In the video porters from opposing sides are documented, along with soldiers of two countries, mutually performing across Wahga. One of those few ‘visible’ borders in the world, where a 12” wide white patch separates two states. A difficult – nearly impossible distance for humans, but here “butterflies and birds are free to fly”. The film includes footage from historic political violence, and of present exiled Tibetans housed in India. It alludes to the nature of conflict by showing combats between rams, and other games in which tension of opponents’ faces can be transcribed into larger (actual) battles. The work deals with displacement and split of communities, yet the tone of the text (by the artist) is subtle and eloquent. Confessing his presumption that porters from Pakistan would be wearing green, while Indian be in red; only to find out later that Pakistanis wore red, while Indian were in blue – exchanging sacks of grains on that impossible border stripe.

That particular border is an aftermath of raj in the Subcontinent, and it was relevant to watch Kanwar’s film projected inside a colonial building, Bradlaugh Hall, built in 1900. British rule’s exploitations and atrocities emerge in the art of John Akomfrah and Barbra Walker. Both artists, in their separate and individual ways, investigate that colonial past, of subjugation, exploitation and oppression, which enslaved indigenous people for white European cause, in the name of patriotism and heroism. The curator’s creative decision to have these works installed at Tolinton Market, another colonial structure adds to the context and meaning of the artworks; as Akomfrah’s Handsworth Songs (part one titled Signs of Empire and part two titled Images of Nationality) incorporates documents (both visual and audio) of colonial rule.

Also Barbra Walker’s charcoal drawings depict soldiers from the Commonwealth in World War I. Men of colour, employed by their white officers, who fought and died at distant soils. Drawings of these larger than life servicemen under the arches built by Indians for their European masters seem as if belonging to that building. The residue of colonial rule in India is not a chapter of history but it is encountered in present-day reality of the South Asia, especially with divide of religion, sects and casts that came into prominence due/after of British rule in India. A legacy that two states of the Indian Subcontinent cannot ignore, since it has segregated the entire population on the basis of faith. Rabbya Naseer and Hurmat ul Ain in their installation Distance Between You and I have dealt with the segregation of sects and beliefs within one nation. Representing this through a poetic, playful and powerful arrangements of fabrics that moves from shades of green to purity of white, the artist’s duo signify the disparity between faiths in the Islamic Republic.

Some other works also relate to the content of sacredness. Mohammad Ali Talpur’s inks on paper, derived from Arabic/Islamic calligraphy are placed in the hall of Lahore Museum filled with statuary of Buddhism. Sparseness of expression in Ali’s textual drawings, and grey stone sculptures of men and women of a bygone era, invoke the link of spirituality in these devotional – yet detached images. Sculptures of Gandhara period must have been considered sacred, and so were Islamic script, but today both are enjoyed mainly for their formal and emotional aspects.

The emotional element is evident in the art of Anwar Saeed, a painter who has pursued his vision, view and vocabulary for years, without anticipating acclaim or fearing restrictions. May it be official, gender, or class, Saeed carved a narrative that is rooted – in history, myth, and everyday discourse. Relying on a varying set of symbols, Saeed constructs episodes of imagination: a man holding an alligator, another male lost his lower half, exchanges between men both pleasant and painful. Saeed’s canvases are cartography of ordinary folks from Lahore, those who would never make to Biennale or any art event for that matter, but those who have a life beyond art.

That life, often considered boring, limited and without color is daubed colorful in Monument of Arrival and Return by Basir Mahmood. His video documents coolies from Lahore Railway Station, clad in bright scarlet and engaged in rudimentary chores: carrying a pair of shoes, handling clocks, holding flowerpots, handing over books; menial (but uncommon for the protagonists) acts made monumental the way Mahmood presents these modest workers. Details of their faces, focus on their arbitrary expressions and highlighting their cloaks, which looks not much different from John Singer Sargent’s Dr. Samuel Jean Pozzi at Home, 1881 (subject of Julian Barnes’ book The Man in the Red Coat), enhance the poetic and personal element of the work that has a political subtext.

Probably the most significant aspect of the LB02 is the curator’s selection of venues, which completes the content – and expands the imagery. For instance, Michael Rakowitz’s video The Ballad of Special Ops Cody, featuring a toy soldier, whose name was once used as a threat by militants, but later discovered to be a “US infantry action figure made to exacting detail…. sold exclusively on US military bases in Kuwait and Iraq”. This figurine jumps into a museum cabinet filled with devotional statues from Mesopotamian Civilization, and suggests them “liberation, urging them to leave their open vitrines and return to their homes”.  The video is installed in the Lahore Museum (another colonial establishment), thus connecting with the chords of history spread across times and regions.

LB02 appears to be an attempt to reclaim narrative, not from Western white dominance, but from every edifice of hegemony. The selection of artists range from established and much recognized names to some recent art graduates. Lahore Biennale 02 is magnificent due to its scale, spread and effect. Al Qasimi’s clarity of vision, her crisp choice and her careful layout, has made the entire exhibition an extension/interpretation of what is Between the Sun and the Moon. Or between North and South, between East and West, between mainstream and periphery.

All these dichotomies can be combined too, as some artists, coming from far off regions have responded to actual locations and created works that communicate history – often the painful past. Dana Al-Hadid’s The Escape of Anarkali, a structure of neon lights that replicates the tomb of a Mughal courtesan, who according to local legend was buried alive in a brick wall. Al-Hadid’s preference to ‘re-construct’ her tomb – at Lahore Fort, the palace of her oppressors/executioners is an act of defiance. Also an act of identifying with all those who suffered through the male dominating patriarchal society. When at dusk this tomb is lit, it turns into a celebration of love between the maidservant and the heir of throne, but that is one popular version. Who knows the other version? As there are always multiple views. Like the history of crusades, which is normally conveyed from a European/Christian/Medieval point. Amin Maalouf, a Lebanese Christian, in his book The Crusades Through Arab Eyes has collected “the story of the Crusades as they were seen, lived and recorded on ‘the other side’ – in other words, in the Arab camp”.

Not only a historian or a public intellectual, but a creative individual also needs to search for accounts from the other side of fence. Wael Shawky, in his three animated videos Crusade Cabaret reconstructs the story of a crucial conjunction between East and West, or what superficially be called the ‘Clash of Civilizations’. Not really because the past, despite of our earnest and eager attempt does not always follow our whims. The historic incidents are told through puppets, enacting as if part of destiny. Communicating how history is written without the details of those who participated, but through the whims of those who were able to extinguish all other versions.

Perhaps aptly illustrated through A Life (Black &White), by Nedko Solakov. A work that dates from 1998 to present, and comprises of two huge walls, perpetually painted from white to black, and vice versa. The cycle of covering one color with other, performed by different individuals at present location, confirms how history is wiped out, layered, coated and camouflaged. Reality is mere illusion. Especially in the context of regions which have suffered from the fake news. ‘Weapons of Mass Destruction’, ‘War Against Terror’ ‘Axis of Evil’ and other such phrases at the end were purely pretexts to prolong New Imperialist agenda/program.

LB02 informs that regardless of his/her present address, an artist always survives in the state of exile; as in Halil Atindere’s video of the Syrian astronaut living in Turkey. What Lahore Biennale 02 offers is not much different from the dream of that man, who was settled in multiple worlds in his lifetime, because it makes you realize that your own world is made up of many segments that come from Kazakhstan, UK, Egypt, Turkey, India, Palestine and other places.

Writing on films, Susan Sontag reveals “…it was from a weekly visit to the cinema that you learned (or tried to learn) how to strut, to smoke, to kiss, to fight, to grieve”; similarly, from a regular visit to Lahore Biennale 02, a citizen learns to recognize his/her reality reflected in the art created by someone residing on the other side of the globe. Confirming that the globe is transparent, trans-national, trans-gender – and transforming.