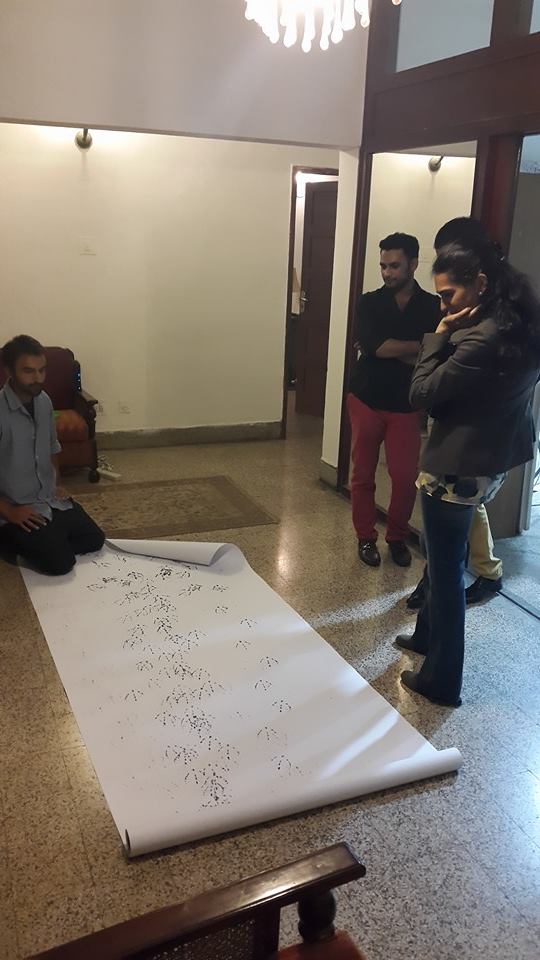 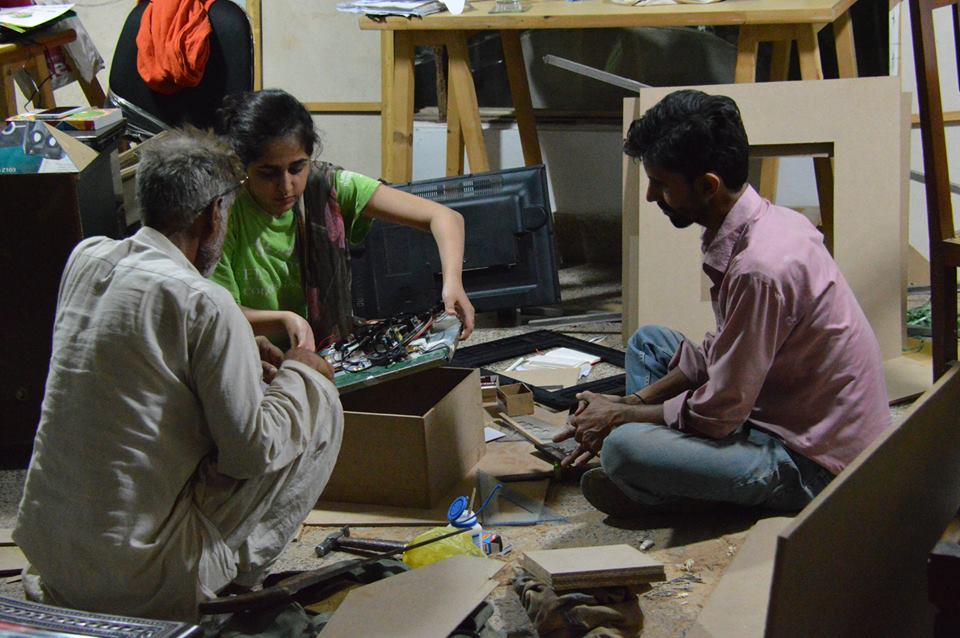 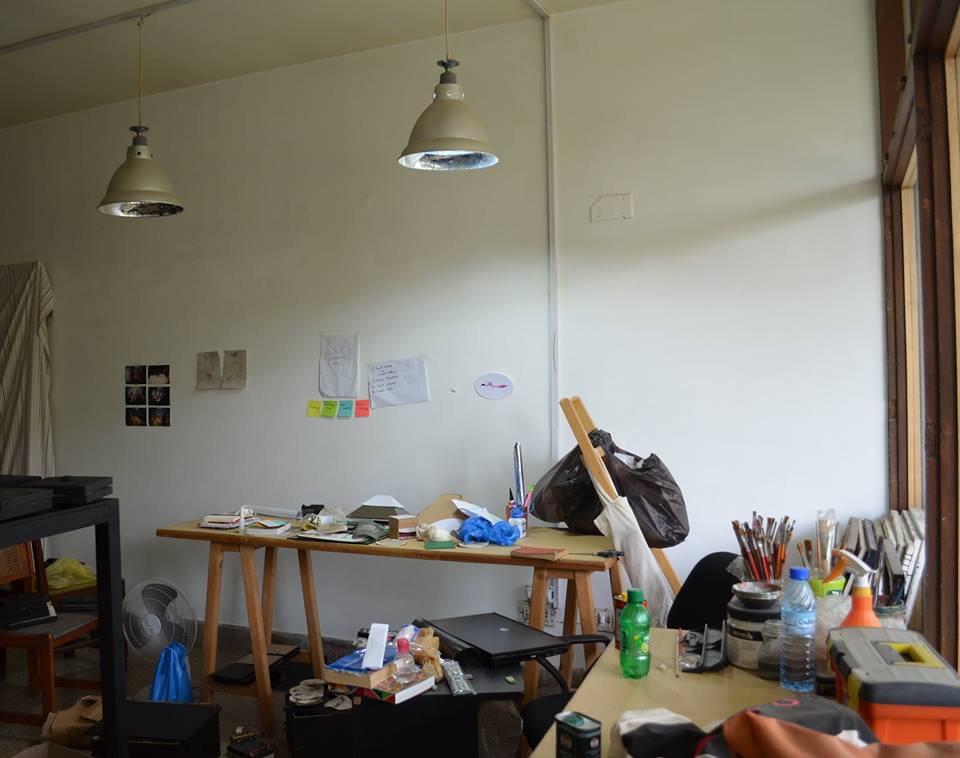 It was only in the fourth and last week of the residency that I got a chance to visit the resident artists of ‘Read and Respond’, the 7th Taaza Tareen Residency. Taaza Tareen, which started in 2005, is an acclaimed endeavor of the Vasl Artists’ Collective which focuses on emerging talent. The twist to the 7th episode of this residency was that it was open to international artists as well. An added feature was inviting a writer in residence. After a grueling selection process this year’s residency hosted four Pakistani artists, graduates of NCA and BNU, one international artist from Namibia and a writer from Karachi. Out of these five, four were visiting Karachi for the first time.

This visit was preceded by various social meetings with promises of meeting soon. Thus it was with much excitement that I tried to locate all the artists as by now, some of them were already working in the Full Circle Gallery where the concluding show was scheduled four days later. Hence, my first stop was the gallery. Upon entering the intimate space I witnessed a flurry of movement, people rushing past with urgency. What caught my attention was that unlike the customary shows where two-dimensional works are usually hung on the walls, here each work seemed to have a very different set of requirements. Amidst this chaos I saw Helen Harris standing quietly in the middle, folding and unfolding some paper. As I drew closer she gave me a distracted look and started talking about her dilemma at hand – the artist books which I had seen her configuring just a moment ago. Intricately constructed, she had produced a series of mini artist books in a form of a puzzle which when folded correctly give you a complete image. These books carry her impressions of the city where she has selected and manipulated images of elements which resonate with ones back home. Even though Helen’s time was cut short due to visa delays, she still grappled with the complexities of assembling artist books – a first for her and to be honest quite complex.

As I left Helen to resolve the installation of her works I moved over to Safdar Ali who was busy doing some measurements with the carpenter.  A soft-spoken person, Safdar’s eyes start twinkling when he speaks about his work. His excitement is contagious and so are his larger-than-life ideas. In various tours around the city, he was most intrigued by the pre-partition buildings of Karachi, where he picked on the minute details in the vernacular which are often left unnoticed. Working with architectural features and the notion of bringing the private in a public space, he plans to create surreal existences which cultivate the viewer’s curiosity; agitating and deluding them and leaving them unsettled to experience the unconventional.

I catch Sufyan Baig as he is standing outside deep in thought. Our conversation started with him relaying how he was planning to install his projection. Opening his laptop he took me through his process, which to me as a third person was a narrative of his experience in a foreign place. His work stems from losing the sense of direction and disorientation experienced in a new city. Our conversation moves on to the experience of being in a residency where Sufyan feels it has been an enriching experience for him giving his work a new dimension and direction.

The Vasl residence, my next stop, is located near the bustling Do Talwar, next to and across shopping malls in a 1970s apartment building. As you walk up to the second floor you are reminded of old Karachi. The hustle bustle is left behind as soon as you enter the gates and the noise is blocked by the trees surrounding the building. Entering the house one is met with the feeling of coming home. Double doors of solid wood, beautifully constructed open spaces; a wide foyer flanked by two main rooms on both sides with sliding doors. One is a sitting room with a dining table and the other is a well-lit work room where the artists have settled, selecting their work stations. Each work space has traces of the person it belongs to; sketches, post its, scraps of drawings on the walls, books etc. It’s a spacious room with big windows looking out to the city. Here I am greeted warmly by Zoya Siddiqui and Faryal Ahsan.

Zoya has landed herself with a sore back and stiff neck, something which according to her is a routine whenever she pushes her physical strength to the limits, which is often the case when it comes to work. Zoya believes in working for solutions. One such solution was constructing holograms so that she is not dependent on electricity anymore. The plain black boxes sitting under her desk hold a highly mechanical world inside them. The technical requirements of the self-devised medium are not just time consuming but also labor intensive. A peek in her sketchbook shows pages rendered full of diagrams and measurements. Experiencing the vast expanse of sea for the first time left a lasting impression on her. Her enthralling interaction with the public at the beach left her enchanted as she delightfully narrates one such chance meeting with a passerby in bright pink attire who was not only eager to pose for her but also quite forthcoming with his own ideas. This exchange she feels has given her much confidence in dealing with the public where earlier she felt hesitant.

Sitting comfortably with her feet up working away on her laptop, is the unexpected sight of Faryal, who is trained as a miniature painter. Practice-wise Faryal’s journey in this residency seems to have taken the biggest leap. She did not want to limit her experience to the confines of the studio where she paints while everyone else goes out to explore the city, an experience she did not want to miss. Thus she decided to venture into unfamiliar territory where her first almost impulsive act was to document everything. Visiting a new destination every day, whether the kati pahari or the slaughter houses in Empress Market she profusely clicked away as if not to miss out any detail. With time she narrowed down her process to capturing mundane details, also determining the medium for her video. An intimidating and daring decision; learning a new medium especially given the limited time and one in which the other residents were well-versed in was taken up with much confidence by her.

It has been an exciting experience for Seher Naveed as she talks about witnessing the artists concerns evolving over time. An open-ended residency where they were free to respond to anything they pleased, she relays how the artists were constantly roaming around the city trying to get a feel of it, whether visiting artist’s studios, attending the Karachi conference or visiting the various bazaars. They started off thinking about an end product but with the passing of time this became more about process and research. Seher is responding to the artists by picking up on fragments of their discussions with each other and with her, which reflect their inquisitiveness, curiosity and their impressions of the city. She is writing about an urban space through their thoughts.

According to Adeela Suleman, coordinator of Vasl Artists’ Collective, the dynamics of these five artists worked really well. Half of them are trained in traditional mediums and the other in new media, with Helen becoming a bridge where she is not pursing a traditional practice yet the nature of her work requires careful manual construction. She feels that having a writer-in-residence made quite a difference. The writing becomes a part of the whole process and the whole process will be documented in writing. There is one person without whom none of this would be possible. Hassan Mustafa plays a silent key role in this residency by facilitating the whole process.

Ever since its inception thirteen years ago, Vasl has provided an international platform for experimentation and engagement to artists in Pakistan through various residencies, workshops and outreach programmes. It provides a chance to grow for the artists, those who are a part of the process as well as those who witness the outcome. It is with great anticipation that I leave the studio feeling energized and looking forward to what the concluding show will have in store for us.

*The title has been taken from the publication INPROCESS by Seher Naveed, produced as part of the residency.

Hajra Haider Karrar is a graduate of the National College of Arts, Lahore. She is a visual artist and a curator and is currently the curator of IVS Gallery, Karachi.