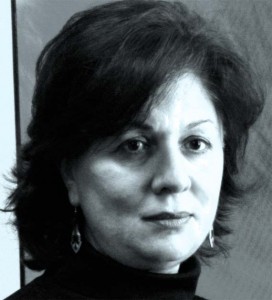 An Ambassador of Pain & Passion- Life and works of Lubna Agha

Flicking through the lives and biographies shakes up one’s own view of the world. Writers write and leave evidence of their thoughts. Painters paint and do another kind of writing. It is rather easy to read through the written words as generally people have learned and build vocabulary that helps them understand or reach out that idea in contrast to a visual one.

Short haired round faced Lubna Agha seemingly had a demure persona yet had fiercely bold appearance in her work. Quetta is her birth place but her brought up was done in Karachi. In her mid-career she left for U.S.A where she passed away in 2012 after living a life full of creative exploration. All artists have their own ways of looking at life. While choosing different media or medium they express or try to express themselves in most intense ways. Lubna had been expressing her self since her childhood as her mother was supportive and appreciative of arts and literature. She was lucky to get under the tutelage of Zuberi sisters who had hailed from Lucknow and were well trained in traditional medias and maintained the flux of other talented contemporaries like Mansur Rahi and Zain ul Abedin for their students to interact with. Winning a variety of honors even before she graduated from Karachi School of Arts, Agha had always been a shining star.

When we think of Pakistani painters who have made an impact on the early infant period of Pakistani art most of the artists that come forth to our mind are male artists. What we may miss that there are a number of female artists who have made an impact in the infant years of Pakistani art and heralded modern thoughts by being a practitioner of modern ideas. Lubna though lived a part of her life in America yet her formative years were spent in her homeland Pakistan which were also the formative years of Pakistani modern art.

Belonging to an era that pioneered and widened the art field in Pakistan, Lubna made the most of it. She enters into the realm of arts when art in her society was not a pass time at home anymore, but a vehicle to communicate the most personal to the world outside. Artists had a lot of freedom in fact had a state patronage to experiment and develop modern idioms. It was the time of early 60’s in Pakistan however it was the period of 70’s, her life as an artist became more prolific and then there was no stopping for her till her soul departed. She was born, lived and left Pakistan to continue her life and creative journey abroad.

How does the identity of an artist who is born, get educated and lived some good part of his life in his own country and then he moves on to settle in another! Does he really gets settled or another kind of struggle starts within and out. Isn’t it expected from all expats or immigrants to be home sick or to feel de-rooted, to be not actually belonging to that place where they have arrived to ‘settle’! Does an artist ever get settled! The lives of immigrant artists generate a lot of debate. On what parameters Agha’s work can be analyzed! Will it be seen within a frame of an artist who is practicing a modern thought at the times when the norms are different or someone who has been moved out of her country and living a life in an environment which is not in sync with the value or give her sense of home! But then is there anything like being home for an artist as artists deliberately move from one place to another thinking of it as an integral part of their creative quests. We know from the cases of Gauguin, Picasso, and John Berger etc who considered forced exiles as catalyst to their creative journeys. Isn’t de-rooting helps artists to fuel their feelings to create more intense art!

Every work of art has a story like every artist has a story. Lubna Agha is one of those artist who had written her story in vibrant colors and expressive forms. Out of all the ways to express oneself, painting is the toughest of all and decoding what a painter is trying to say is even tougher. Her work has all sorts of vocabulary from traditional to Modern and from Modern to Contemporary yet her style remains abstract.

Reflections of her mentors often echoed in her works yet she was invincible to find her own path which she ultimately did. Appearing in multiple shows regularly, experimenting in plethora of styles, she doesn’t look fixed with her ideas. Developing a body of work spanning over 4 decades, in each decade she appears to be traversing a different world which is united by her signature style. Her very popular and enigmatic white paintings of early years remind me of Mondrian who did a series called Compositions where he plays with lines, colors and forms. Lubna too seems to be improvising the language of color and form in her white panels of 1970’s.

Shifting perspective in mediums, theme, vocabulary of color palette, technique and even imagery, her pieces provide a striking metaphors at times and a peek into her life which she is living as an outsider. Though living far she wasn’t distant from her land. Strokes with emphasizing movement, translucent layers of paints with a jewel like quality at times surreal with ghostly imagery, figures appear and forms were born out of a distant memory. Her canvas was charged with color and a lot started happening. Interlocking figures with arms stretched out and hands moving into different direction Agha was burning.

Who was not affected by the local politics of 70’s and Zia regime of 80’s but she remained apparently delusional from any kind of political commentary yet concerned with the state of her fellow countrymen and  revisited themes like home, nationhood, war and women for example in ‘Tree of Life’, ‘Roots’, ‘Falling’ and ‘Doli’ all created in early 80’s. Her work unravels gradually to the viewer. What seems fine on first glance turns into a torturing inquiry of self and soul! The eyelevel she uses play a role in generating such an impression, putting the onlooker into a very uncomfortable stand point, all referring back to her relocation or dislocation! She doesn’t seem to be enjoying a life abroad, away from home!

She kept on providing a retreat one gets lost to find a quiet space within, not to relax or comfort but, to reflect and realize.

She speaks a lot about her own work and in a way meaningful manner than anyone else could interpret. Her visuals have a quality of time travel. On one hand they appear some kind of a fiery speech which can lit a fire, on the other those vibrant colors transport you to another world helping you find a retreat within. The act of losing oneself happens at both ends. Agha being a painter navigates through the corridor of her imagination and here the onlooker gets quite easily lost finding some kind of a sanctuary in those fierce combination of lines, colors and forms.

Travelling from one place to another within the States and feeling a spiritual void she found refuge in mystical and revolutionary writings of Rumi, Fehmida Riaz and Kishwar Naheed. That would have had sufficed that void as thereafter the peace prevails. Her 90’s work acquired some consolidation yet set on a different inquiry.

Artists cannot remain untouched by their surroundings and in Agha’s case there had always been a lot of variety to which she truthfully responded. Remaining as an expat, the last two decades of her life were also filled with new opportunities and added roles to play. And then 9/11 happened. This replaced mystery in her work with satire and mockery, primeval with calculated. After shelving white paint, the hands, figures, fish and trees are also shelved for some time and she started speaking with a new set of diction. An indispensable Muslim accessory (as said by Marcella in her monograph of Lubna) Ja-Namaz comes forth as a major vocabulary to narrate her understanding of geo political situation of that times and her panels became aware of the semantics which are geometric and designed in nature.

Lubna lived away from home but never forgot her roots. She didn’t know that she is planning for the last phase of her work when her eyes caught the beauty of Islamic civilization on trip to Morocco and Turkey. Here again she was trying to stay connected and to reflect the bond she always felt not only for her homeland but to whole Muslim heritage. Adding three dimensional objects such as ‘rehl’ to her practice she would pay tribute to the Muslim artisan who with care and fineness had built the dynamics of Islamic art. Being someone who is inspired by Islamic aesthetics she doesn’t seem to be concerning with any kind of Islamic view of her work or expression, however she may have been on a spiritual quest as all artist have a journey within. The systematic division of canvas could be the result of herself working as a designer for years. The induction of variety of mediums, methods and forms along with the boldness she carried in her later pieces could have the same reason too.

Her legacy is to practice and develop a manner which was yet to be discovered and explored. That doesn’t surely makes her a rebellion of some sort but she can be acknowledged for propagating modern ideas at that time when Pakistani modern art was in its nascent years.The discipline and patience she learned and practiced under her mentors put her on journey where she never lost the sight of purpose and passion in whichever part of the world she lived.