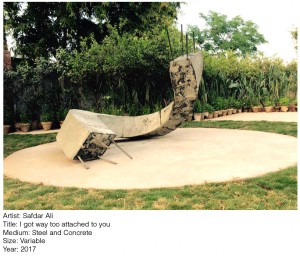 “Two possibilities exist: either we are alone in the Universe or we are not. Both are equally terrifying.” – Arthur C. Clarke

A demonstration, an encounter, an everlasting exchange…an exchange that binds the gap where distances lie. In the small town of Khushab, away from Lahore, these distances surfaced as an escape for a few individuals.  A two-week long journey meditated by Pioneer Cement and Canvas Gallery conspired to bring a first-of-its-kind Sculpture Artist Residency.

Immersing the eye, the accumulated green of the land welcomed the work of artists within its captivity. Jibran Shahid, Ehsan Memon, Safdar Ali, Suleman Faisal, Mahbub Jokhio, and Umer Nawaz had accumulated their practices with the surroundings of their altercation with sensibilities that acquired their work to have become a part of greater explored settings.

Perceiving is an activity and representation of it is a learnt behavior. For Mahbub Jokhio the construction of an outsized cement cube was a notion of exploration that constantly changes with perception. The dialogue of movement with the title of work changing from “one cube” to “two cubes”, as the viewer rotates around the larger cube and resonates a much smaller one on the other end, brought together the very junction of illusion. The illusion if defined by anything but truth, but then again truth becomes an activity of representation and hence the merry-go-round for all of us. With ‘’art”, the case is deferred and anything can stand for, anything else. The discovery of the possible uniformities of the cube are then again limited by concords which have been learned during a lifetime and which can be changed only during moments of real originality.

J.J Gibson, an American psychologist, believed that the perception of the real world is a direct process, almost necessitating little in the way of supplementation through knowledge. Umer Nawaz deconstructed that acquired knowledge in regard with the purposed cement withholdings and conformed his sightings of multiple cement bags stacked one onto another – only to come to acquire upon the moulds of them…

…The inspection of these surfaces withdraw assertions within the stack of representations. The thought then gets diffused at a point where is becomes almost evident to consider the social and cultural contextual surroundings the viewer and the artist are to meet. At the same time an artist’s association with the perception, perspective of technique and bondage are to be questioned in an isolated environment.

Further along the green…

A concrete structure, standing tall as it can, almost resembling a cylindrical form with bulging layers and calling itself throw me up in the air “certainly questioned the possibility of it all. Suleman Faisal abruptly ended his agitated yet clever concerns with the idea of a continuous effort, an effort to make a continuous effort… Being weighed down by one’s own complications, it becomes inherent to give way to the contradictions of the mind and the body, hence vice versa. The artist explored the disparities and the concrete precincts that ever produce energies. Almost a silent ridicule.

In real life, we rarely acquire the effort to attain to the occlusion that he has succeeded in his work.  Each bulge counting for another effortless bulge to sit on top and make way for more continuous struggle for the cognizance and the physique.

Then there was this…

Titled: “I got way too attached to you” –

Indeed, the attachment of an embodied soul is ever lasting. A piece that stood as silent as anything yet asserted a much poetic movement within its structure. A structure of an elongated rectangular symmetry, where one end rested on the ground and the other lifted itself midst the air. Safdar Ali’s mechanism of relation with the two concrete sides addressed in homogeneity stood for assertions of perpetual relation. The constellation of his piece and the most primitive conventions accumulate only when they are protected from the distant powerful structural factors and Safdar had every intention of doing so.

Midst a hallway a beam scale hung from the ceiling and elevated on a concrete cube. Either side withheld distortion within the weight placed, one side heavier than the other yet visually balanced. Awkwardly engaging in the placement, Memon had political assertions with his work, where the only acquired agenda was to deal with the human innate transparencies and the phenomena of time. However, for one to question an equilibrium and the human nature that prevails with, it becomes essential to be able to distinguish the range of different equivalences available for the artist but the range will still have its limits. The unknown mass to be measured in contrast with the known measure further questions the proposed title of the work where a defined known reciprocates the unknown!

A mimicry for the trees and creating to acquire…

Jibran Shahid was perhaps most in essence by the metallic industrial structures surrounding his concern. Almost camouflaged within the far away foliage stood an average sized structure, a form accumulated by the junk pipes resembling a hierarchy of a tree.  “A familiar timbre”, Jibran asserts with his work, perhaps had confined his experience with the contradictory nature of the natural with industrial.

Each of the artworks spoke with one another with series of curious dialogues contradicting and yet supporting one another. These series of three-dimensional conversations are to continue in the space and years to come.

2 Responses to An Aesthetic Mentor