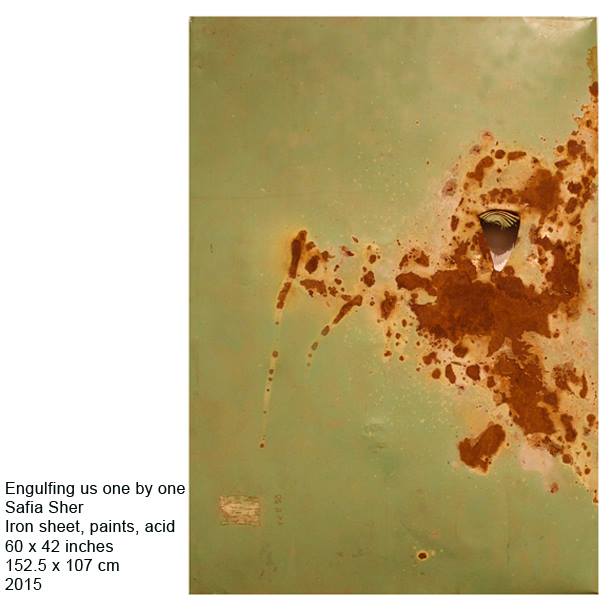 If our minds ever voyage through the nostalgic mental libraries of our past art periods, similar to recalling a cherished memory, several glorious art

Book Review: “The Dance of Death”
Hearsay
Art of the future: NCA Thesis 2019

If our minds ever voyage through the nostalgic mental libraries of our past art periods, similar to recalling a cherished memory, several glorious artworks come to mind. Splendid Renaissance sculptures, carved to embody a quixotic perfection. The delightful play of light and shadow in an Impressionist painting. Absurd Surrealist dreamscapes born from probing the subconscious mind. In the postmodern era however, the art world has expanded into an incomprehensively vast landscape, where an overabundance of material is utilized to indicate a plethora of different ideas. ‘Amalgamate’, the group show at Sanat Gallery is a celebration of the infinite choices available to artists. A recognition of experimentation and it’s acceptability in the contemporary art world. Seven distinctive artists are brought together as their starkly contrasting works intermingle under one roof.

Mahbub Jokhio humorously challenges the rigid notion of meaning as he investigates the relationship between verbal messages and how they are comprehended in ‘How to Transfigure a Print into Painting’. The satirical tone of the titles provoke the viewer to delve further and truly attempt to grasp Jokhio’s implications. The very purpose of photography is to capture a significant moment. Yet the artist tricks the medium into documenting an anticlimactic disregard of its own self in ‘How to Exit from a Photograph’.  Samreen Sultan also worked digitally and with paint like Jokhio, however chose to study the complex issues faced by the female body. Phantomlike body parts interact with rusted doors and domestic surfaces in fantastical situations that explore suppression and censorship of the female form and contest that oppression.

Affan Baghpati toys with the notion of craft. Fusing animal horns with found, jewel like objects, the artist engages in intensive research, through which he discovers and acquires painstakingly crafted, functional items rife with history.  As he ironically attaches the horns through another form of craft, he shifts the identity of the items, rendering their prior meaning useless. Baghpati provides them with alternate, almost demonic personalities and enables them to transcend the banality of mere practicality. Safia Sher on the other hand, works with sheets of iron by ‘painting’ them with acid as well as other paints. The artist’s process serves as an integral part in determining the aesthetic of the final product, given the highly experimentative nature of her methods. The notion of time and inevitable disintegration of the tangible world plays a significant part in the artists work. Forcing parts of the sheets to decay beforetime with acid, while allowing them to rust and fade naturally, they act as time-based sculptures, forever transforming.

Onaiz Taqi’s enchanting ink illustrations on wasli consider the significance of every human identity within a universe of souls. Despite the ability to lose oneself in an ocean of bodies, every single characters narrative is interwoven with the next and is necessary in contributing to the bigger picture. The delicately rendered inhabitants of a fictional world startle and delight, as it is realized upon a closer look that each one of them is unique. Shahana Afaq’s childlike drawings investigate a single characters narrative in contrast. The artist explores themes of false companionship, individuality and loss. The strange relationship between Haider and Hassan, whether imagined or real, is manipulated into the latter’s physical identity.

Ammar Faiz also analyses the psychology of human behavior through the medium of video. Focusing on marginalized groups, the artist switches the roles of those behind and in front of the camera, allowing his subjects to consciously act according to the experience of getting filmed. By recording their intimate narratives mingled with elements of subconscious performance, the artist presents an unconventional approach to recording human experience by letting the camera actively affect the subject.

To amalgamate is to integrate. To combine. To put together. As gleaming copper pots sprouting horns are spotted alongside digital prints and childlike illustrations, it may baffle the mind as to why such strikingly different works have been brought together. In truth, despite the diverse visuals, the active experimentation with unique mediums and investigation of present-day issues embody the significant freedom of contemporary artists working in a postmodern world.