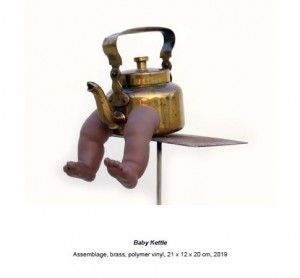 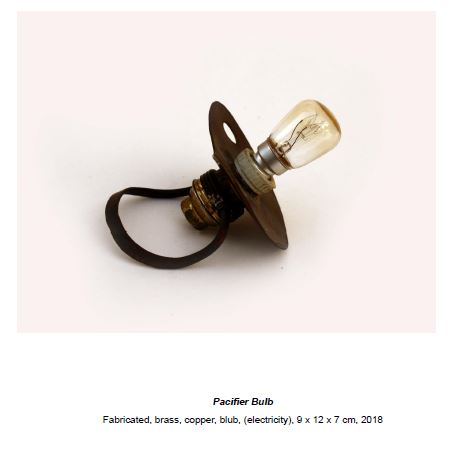 A show titled ‘Alternative Imaginary’ by Affan Baghpatee took place at Koel Gallery in Karachi on the 8th of October, 2019. He graduated with a BFA from the Indus Valley School of Art and Architecture and a Master’s degree from Beaconhouse National University. Based in Karachi, he has exhibited in various galleries and art fairs nationally and internationally.

Comprising of Baghpatee’s most recent body of work, this show reflects upon the history of objects and the evolution of their forms through the artist’s vision. Morphing various items together, the artist creates new and edgy visuals by forgetting the original and past forms of those items, giving birth to objects based on his alternative imagination.

A highly recurring motif in Baghpatee’s current body of work is the kettle, which has been depicted in various forms. Taking the example of his work Baby Kettle in which the legs of a baby and a brass kettle have been morphed together, this visual possibly reflects upon the period of infancy where one keeps going through changes. Similarly, a visual titled Baby Blue Kettle depicts the body of a baby with a kettle as its head; these two visuals are possibly shedding light upon the concept of undergoing transition after a baby is born, the kettle representing a vessel which brews and allows change. The Pacifier Bulb is another interesting piece which supports the concept of transition; when toddlers are young, they are dependent on pacifiers to satisfy their needs but eventually when they grow out of infancy, they become aware and start looking for food to satisfy their needs through intelligence.

The second motif that has been used multiple times in Baghpatee’s work is the ‘surmedani’, a symbol that could be linking the viewer to the artist’s childhood. Being an ancient eye cosmetic, which was used earlier to apply Kohl, the surmedani is possibly symbolic of the connection the artist has to his ancestors. Taking the example of his piece titled Pee Surmedani which depicts the figure of a little boy with a phallus, this artwork perhaps reflects upon the artist’s years of boyhood during which he had observed someone using this particular item hence, associating himself to the object itself through memory of the past.

Lastly, the ‘lota’ is a symbol which has been used multiple times in this body of work. Being referred to as a vessel, this motif is perhaps being represented as a vessel of strength since it is being supported by horns in certain visuals, horns being symbols of strength and durability as well. However, Out in the landscape treats the particular vessel through a different perspective; being placed as a water tank amidst a green landscape, this particular object becomes a symbol of tolerance since tanks can endure larger amounts of water. This image can also be shedding light upon the nature of humans which consists of tolerance and perseverance that develops in them with the passage of time.

What needs to be noted in Baghpatee’s visuals is that each motif represents a period in every man’s life; starting from infancy (the kettle) to boyhood (the surmedani) and finally into adulthood (the lota). Perhaps a mirror of the artist’s own life, this body of work not only has strong visuals but it also creates room for various interpretations, depending on individual reasoning and experiences, which is how one grows and matures. Having a distinct layout, each piece narrates its own story, leaving the observer in awe of both the subject and the object.