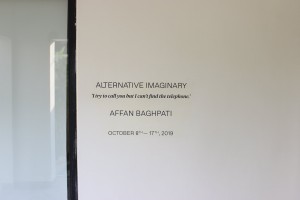 The artist does not only provide us with a sense of unachieved reality; he gives us an entire visual jargon to associate his work with, re-contextualizing each found object with a new narrative. It is a prevalent amalgamation between several realities to make something new, between the known and the unusual, the local and the foreign.

Baghpati, continuing his usual practice, has taken every day mundane objects like the kettle or the ‘lota’ that once held a lot of relevance which depleted overtime, the artist’s reimagines them with foreign or animalistic elements to mark his very own constructed context.

He uses several mediums with plastic, acrylic, polymer fiber/vinyl, brass and copper. While any objects he uses together contrast or conflict visually, they go deeper in creating a new blurred sense of aesthetics and interpretations, going beyond the normal.

The show is expected to continue till the 17th of October, 2019.