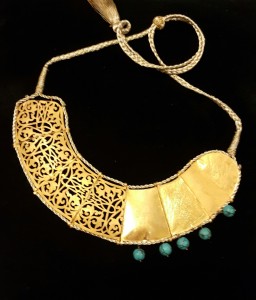 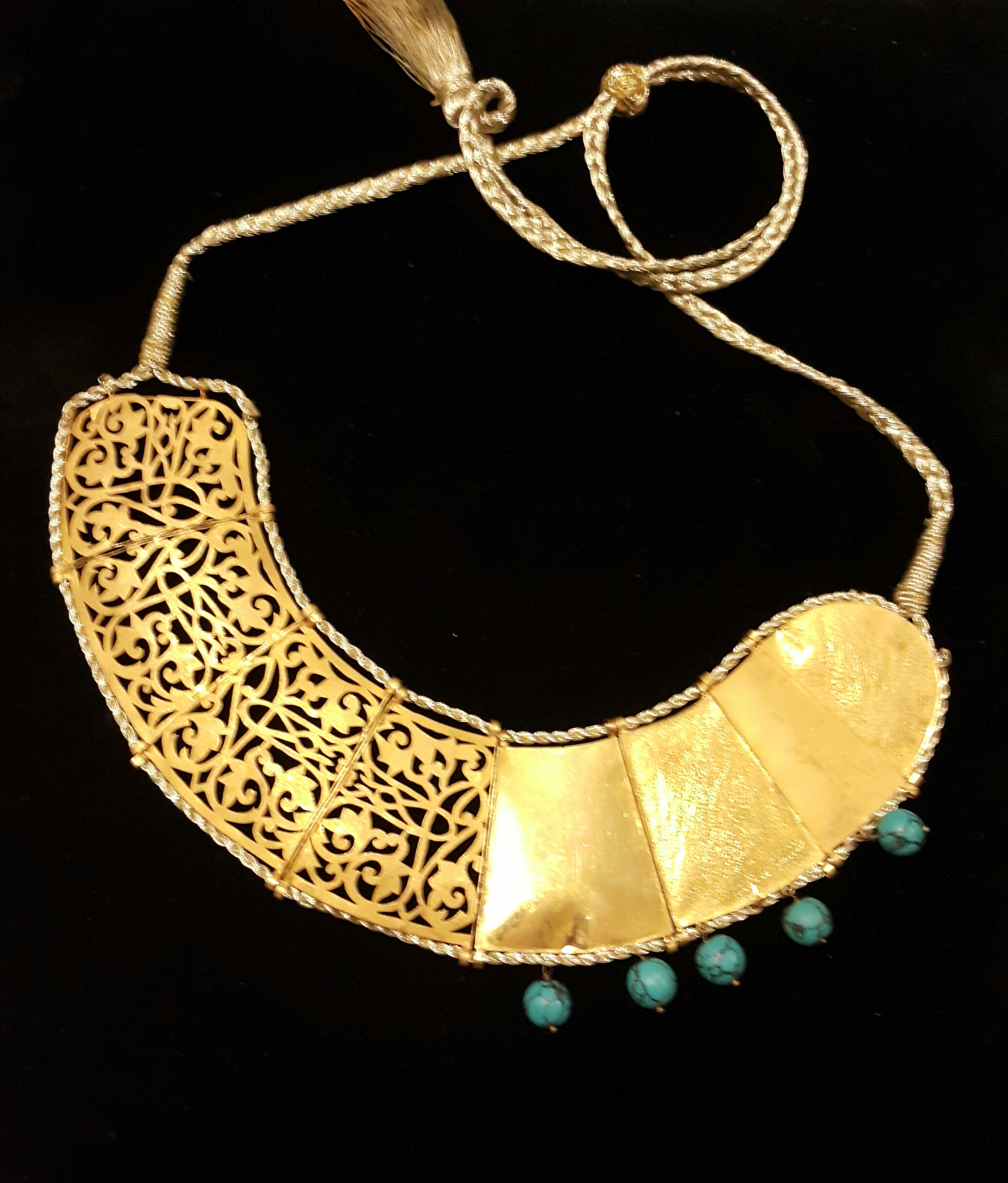 ALIZEH, IN OUR SITUATION, FOR NOW CRAFT IS ART-CRAFT

“The ornament added lightly by the craftsman to an every-day utensil is at once the humanization of his labour, and the witness that man does not live by bread alone.”

“Textiles!” Stroking the luxuriant fabric spread on the table, I exulted!

“I am so proud of you Alizeh. Textiles and block printing! Using crafts for your thesis collection!” I looked up excitedly.

“No! Not textiles, Ma’m.” Alizeh, who now looked irritated, declared emphatically. The remaining twenty minutes Alizeh spent explaining why the twenty feet long block-printed fabric was sculpture, art installation. Anything, but decidedly not craft. Yes, it was art! I agree. But what struck me was Alizeh’s snobbish incredulity. How I could even think her piece was a kind of craft?

Alizeh’s (who I use as symbol of Pakistani novice artist) disdain for craft-making gave me, an art educator, cause to theorize about the relation, difference, and distance between art and craft in our (Pakistani) situation. Alizeh’s attitude is reflective of the conundrum about craft being art or not. Conundrum also because some of Pakistani art stalwarts claim crafts are art. The puzzle gets complicated when the conflicting views don’t elaborate why crafts are not art or why they are art! This is an old, but serious art ed. question, which ought to be looked at from different cultural and personal perspectives.

History. On my part, I take cue from Howard Risatti’s (2013) “Theory of Craft,” the views of art critics; and the seminal treatises of Coomaraswamy, William Morris, George Birdwood, John Ruskin on Indian crafts. My understanding is summed in the following sub-notes:

The artists’ ability of giving physical form to ideas, and viewers mental riposte to art objects is usually developed through distinguished academic training, and unlimited exposure to sophisticated works of art. Societies that have profusion of art-centered institutions like art schools, galleries, museums, environmental art, are socially individualistic western societies. Where modern and postmodern criteria of art making and art appreciation dovetail with the societal and political ideals of individual and democratic rights. In historically unified cultures, art and craft have distinct aesthetic identities. Even if craft’s formal qualities meet popular aesthetic standards, it is never art! In fact, crafts have evolved into design objects in the post Bauhaus West. The two are separated by the conjunction and: Thus “art and craft!”

It is a picture of that social context in which art-craft flourished in the Indo-Pakistan subcontinent. This is also a picture of Coomaraswamy’s “Normal View of Art.” Whose principles of “spirituality-in-utility,” “submersion of individual into communal” has remained at the core of all social, political, transactional, and artistic activities. When the unique aesthetic criteria of Indian crafts are invoked, the artistic virtues of Indian utilitarian crafts match the aesthetic credentials of world class art.

The above is the summary of two separate aesthetic criteria of paradigmatic art and paradigmatic craft objects, in both the western and Indo-Pakistani contexts. Criteria, that are organic to their respective historical and cultural milieus. Wherefrom, the arts and crafts originate, determine their unique or collective aesthetics, and cull independent, or identical identities.

Our Situation. In the 19th century Indian subcontinent, when the local artisans and recipients of crafts were living by (what is so beautifully coined in Coomaraswamy’s one-liner query “Why Exhibit Works of Art”) dictum, the British rulers presented diametrically opposite life-ideals. Which, represented in the inferior replicas of institutions of government, industry, and art colleges, were expected to be embraced fast-forward. Imagine the culture where questions like “Why Exhibit?” were genuinely posed in response to the newly introduced custom of putting up art exhibitions, and celebrating individual artists as brands! What social and psychological upheaval the once intellectually and artistically proud Indian society must have gone through with this challenge to its ideological and civilizational foundations? By changing coercively the social order, the motive of art from service to personal gratification, the alien norms mutilated the self-confidence of the erstwhile confident artistic and inventive impulses of local artisans; who were called karigar.

The rapid transformation of social values resulted in the decadence of artistic traditions and the intellectual sensibilities of artisans and people. The work ethics and the tastes of masses and cultural elite too were shattered. The distinction between what should be “beautiful and what “useful,” which was previously unknown, forced its way in the karkhanas, the traditional hubs of creative industries. It didn’t take long for the elite to talk in terms of “fine arts” and “utilitarian craft.” The belief that art provides means to that beautific end of contemplation; the wealth of self-understanding by making craft available in different guises—an ornament on a pitcher, the aqua square of the Katas-mandir, a flame red costume with a speck of green and gold, a courtyard with floral tiles and oil lamps, Taj Mahal, a pattern running along a manuscript, Ajanta, convulsing figures in miniature—now appeared naive. Few decades, the magnificence of the layered, meaningful ever day craft objects that brought on the daily basis artisans and masses “face to face with own self” became embarrassingly old-school for the sensibilities on the fast track of modernity. Eventually, the vast body of indigenous knowledge, which had crystalized into a core called Indian culture was abruptly discarded by elite.

During the last two hundred years, the indigenous philosophy degenerated at the social, economic, and aesthetic levels. Using the lens of “Dependent Theory,” I claim that despite all the modern metropolis-like urban development, Pakistan is still predominantly a pre-industrial agrarian country. After 1947, it continues to rely, without contributing to the global knowledge economy, on the borrowed models of governance, economy, education, and aesthetic-creative industries. This is without reclaiming the indigenous, original, and building atop organically evolved artistic innovations. This blind adoption has created incongruousness between the so-called creative expression and cultural idealism, which remains unperturbed pre-modern. Unlike India, taking pride in the indigenous in Pakistan is discouraged. Consequently, since independence (1947), Pakistanis are in the double bind of western and Islamic.

Today, when novice Pakistani artists, like Alizeh, make art, their self-expressive content appears deficient and superficial. They use borrowed skills and intellectual vocabulary to create, evaluate, share and critique art. The lack of cohesion between the aesthetic criteria and social ideals has left artists bereft of cultural capital. Hung in art galleries, their art fails to resonate with Pakistani people. Art, through schools and popular cultural podiums could have been in the daily experience of common people, like it is in the West. However, Pakistani art is for the exclusive consumption of local and international elite. The proponents of the Arts and Crafts Movement had predicted that the western aesthetic criteria if imposed on India in hurry, it would confuse and diminish the organic Indian aesthetics. Alizeh’s contempt and Pakistani literati’s infatuation with crafts, is sign of cultural depravity and stunted self-confidence.

Dear Alizeh. I have composed this theory about the relation, difference and distance between art and craft in Pakistani context, for you. I want to tell you that the artificial difference and distance created through the political force severed the blood-relation that craft and art enjoyed in the pre-colonial Indian subcontinent. I assure you that, in contrast to separate art and craft configuration in the West, craft, until now, is art in the Pakistani context (This may change in the future). So, if you make textiles, use block-printing, it is still art. No doubt, as a global-planetariat citizen, it would do you well to know both the Western and Indian credos of aesthetics. The artists in the West are also very smartly merging culturally different aesthetic charters with their modern one. The 21st century art galleries are calling for socially responsive art projects. They want project “story,” complete with concept and utility defined. Alizeh, the problem with us has been that we take things seriously when the West adopts them. Lest we miss, please know the West is now hell-bent experimenting “our” art-craft.