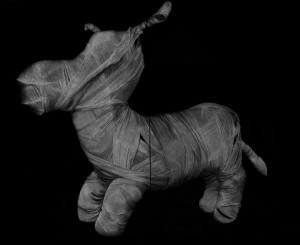 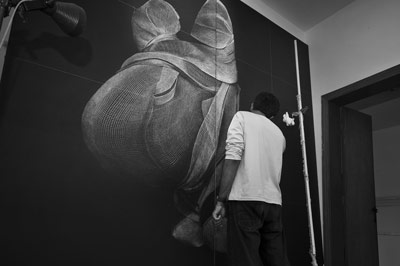 ArtNow: There seems to be a hiatus of about eight years between the time you graduated and when you had your first show. How did you fill those years?

Adeel uz Zafar: After graduating from the National College of Arts in 1998, I became involved in creating illustrations for children’s story books & supplementary reading materials. I was commissioned to live and work in Gilgit for a while and it was a great experience because I coalesced with nature and found time to discover myself both as an artist and as a person. The illustrations it paid for my upkeep and the good thing was that I wasn’t unhappy doing it.

When I returned to Karachi, I worked in a postproduction unit and learned advanced, cutting edge software for special effect and three dimensional modeling. I can’t say any of that time was wasted. I may not have been making art but I was discovering, growing and evolving as a person and as an artist.

AN: Tell us about your tedious laboriousness of your process. Your production is as much about the process as the final outcome

AUZ: I like to challenge myself. For my thesis I installed more than a thousand MDF board tiles, each 6 by 6 inches and painted the image of an eye on all of them. I wanted to see if I had the patience and endurance to complete this tedious test I had set for myself. Of course the project resonated with the conceptual allusion to vision, both human and cosmic, that bound the piece to an ongoing dialogue about insight and awareness. But through this experiment I learned that I had the mettle I needed to go the extra mile in my art. That was a moment of freedom; when you realize there is no impediment in terms of physical engagement, it set you free to think.

During my days in Gilgit, there were no art shops from where I could buy suitable paper or art materials. So I experimented with everyday objects and tools. I had brought some photographic paper and I scratched its surface with pencils, knives, cutters, even my nails. The results were riveting for me and it was then that I decided I would pursue this trajectory of technique and style. The work I do now is exacting and each piece takes almost three months to finish, requiring me to work at it four or five hours a day.

AN: You have opted for large scale works in an age when the neo-miniature rules the roost. Why don’t you do smaller pieces?

AUZ: In 2009, a few of us fellow artists decided that too many visual practitioners were limiting themselves to small-scale works, either due to inadequate studio and gallery spaces or because of the inordinate focus on miniature. We decided it was time to extend the terrain. We felt it was time to go big but we were confronting other issues we had observed. We noticed that in a gallery full of small works, audiences spent little time engaging with each piece, hurrying on to the next image in less than 4 to 5 seconds. It was our goal that audiences spend time with the work, mull over it and study its complexities. In this regard four of us, Munawwar Ali Syed, Asad Hussain, Naseer Bhurghri and myself held a show ‘Size Does Matter’ at VM Art Gallery curated by Riffat Alvi n which we showed one piece each. That was the first time I worked in that scale, with a 7 feet by 11 feet vinyl. Coming from small page illustrations it was a huge leap of faith

AN: Why have you chosen vinyl as your medium and why do you scratch out rather than paint on?

AUZ: It was the same voice in my head telling me I should raise the bar for my own practice. It would have been simpler to use a pencil or a marker on canvas and create a similar effect. But why make it easier if you can make it harder? My subject matter is a toy wrapped in gauze-like bandages and the linear striations are irreversible and cannot be erased or modified once the line has been indelibly gouged into the surface. At the most, I can manipulate the fold of the gauze but I cannot delete any line once I have made it. This is the outcome of my self-imposed challenge and I make the work more demanding and onerous through this technique of nicking, grating, and scuffing out rather than depositing on, as in most artworks. But the process has reference to my subject matter as well and the two are immeasurably integrated

AN: What is the thematic presumption of using toys or iconic representations of global entertainment?

AUZ: Toys reflect the innocence of childhood and a primeval need for security during adolescence. But you will detect that there is also something sinister about the object because it is hidden from view and is bandaged. My subliminal allusion is that the object is broken or wounded and requires repair. The idea points to a loss of innocence and to the disintegration of our socio-political framework. I have used the iconic figures of Mickey Mouse and King Kong, both associated with western pop culture and interestingly, they exchange referential positions. Mickey Mouse who is traditionally adorable and lovable is shrouded and mysterious almost like a disguise because his intention is to enter children’s homes and ensure that he becomes a central figure in their lives – the idea is that multinational corporations creep into our childhood associations and embed themselves there so that the merchandising never stops. On the other hand, King Kong who is supposedly the epitome of evil and destruction is unravelled, more exposed than other toys signifying the true nature of a beast that is actually tender at heart in spite of his appearance but is ruthlessly caught and caged by humans and eventually killed.

AN: Your work is becoming darker. The innocent toys you once used like teddy bears and stuffed donkeys are transforming into beasts and monsters. What is the reference?

AUZ: We are living in dark times. My most recent works are not of toys at all but have taken the shape of repugnant and bloodcurdling beasts with teeth and many horns. Some of my other works represent the myth of the many headed Hydra because the issues that surround us are becoming more complex and we are unable to addresses or attack one without many others cropping up. In some places the bandages are becoming denser, more rope-like and that also points to the fact that true identities are being concealed under many layers while the malevolence of their actions are becoming darker.

AN: You are a mild, stoic person and have been known to never raise your voice or show extreme emotion. What effect do these terrifying images have on your consciousness?
There are times my dreams take me on this surreal path of the unknown; the feeling of floating in an abyss; a sea of micro organisms in the deep recesses where life is almost extinct. Unseen through the naked eye these are only visible through a powerful microscopic lens; Our ignorant mind brushes their parasitic existence aside yet they cannot be denied; they are grotesque, monstrous, contagious unleashing death and destruction at times, yet have a sinister beauty; a haunting fascination to a charm in their ugliness. In my view the wickedness germinating in society is just like those bacterial organisms. We may not see them on the surface but they breed and unleash their pandemic destruction.