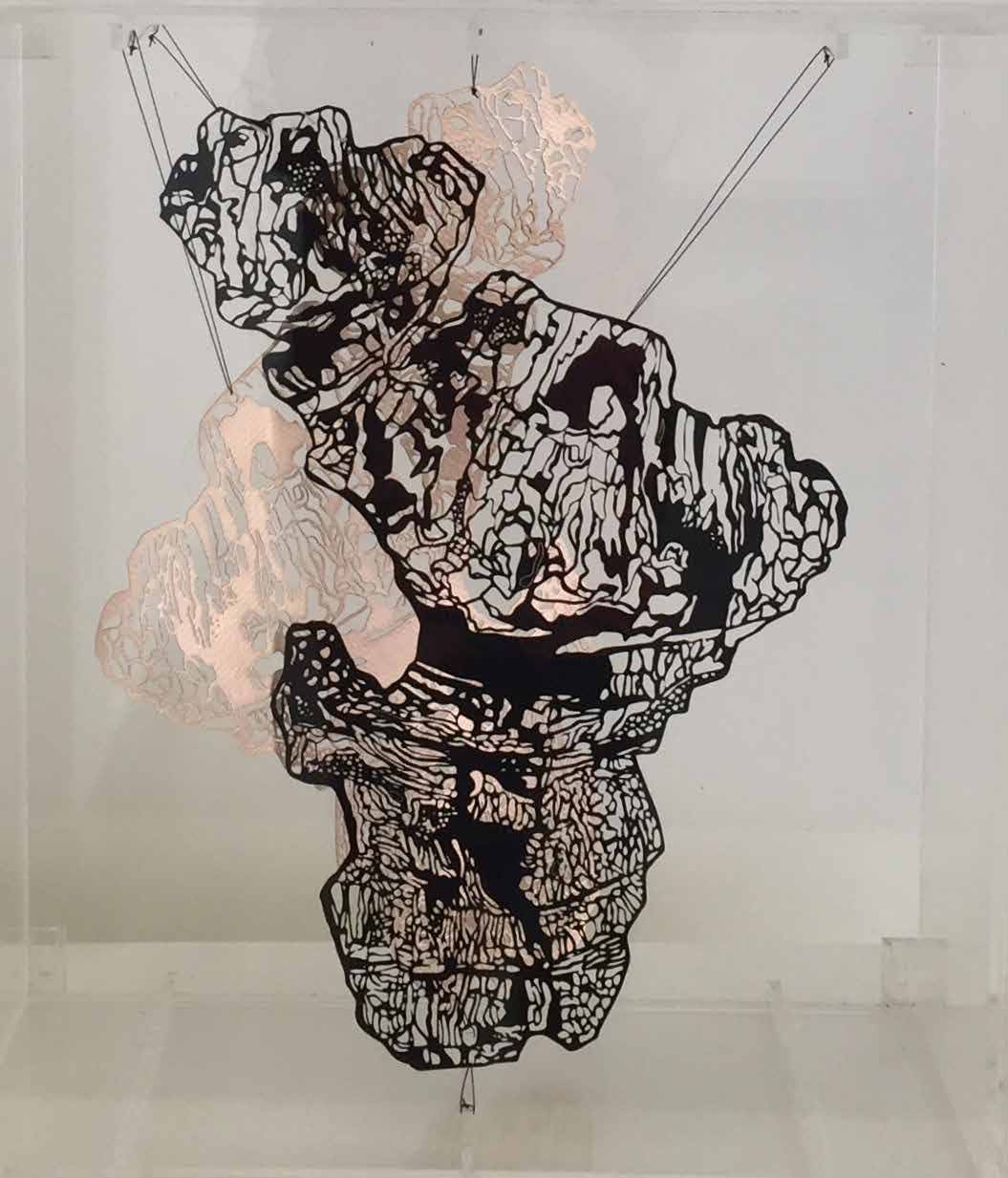 While it may seem like an arduous task to apply mainly monochromatic schemes in a body of work without it becoming monotonous, the three participating artists effectively put elements of light, shadow and geometry to elaborate use. Curated by Alia Bilgrami, the three-person show titled ‘Folding Shadows’ opened at Koel Gallery in Karachi on April 25th, 2018, and includes the work of artists Sarah Ahmad, Babar Gull and Hadia Moiz.

Finding inspiration from patterns in nature, Sarah Ahmad’s archival ink drawings and laser cut paper installations acutely resemble biological shapes of bodily organs, particularly the heart and brain. Organic forms like the arrangement of veins are presented as correlating to the arrangement of other organic forms in nature, such as tree bark and roots. Her work is therefore looking at the interconnection of shapes, patterns and arrangements that resemble each other in nature and outside nature, that is, in manmade geometry. By stripping the use of colour, Ahmad creates a body of work that aims to eliminate the differentiation between the organic and manmade patterns, in turn highlighting the cohesiveness of all creation in the universe. While the interconnection of patterns between science and nature is a concept that has been explored several times by artists and photographers before, Ahmad’s inventive use of laser-cut paper as installation gives physicality to these abstract contrasts, giving it three-dimensionality in a sculptural method.

Babar Gull appropriates the utility of the material of paper, presenting it as a contrast of form and functionality. His minimalist imagery takes influence from Japanese origami, using mainly impressions of animals in his ink pieces, particularly birds. His stainless steel sculptures try to capture the essence of a paper plane, using the image of two-dimensionality and presenting it instead as a three-dimensional object. The lightness of the paper plane is purposely lost in order to achieve the heaviness of metal, therefore changing the purpose of the material. Symbols of the metallic paper plane and origami birds both hint at losing the ability of flight by changing the basic ­­­­functionality of the objects. Gull focuses not on representing subjects in their actual form, but on capturing their core manifestation. Despite presenting the image of animals made out of paper in a two-dimensional form, or of a three-dimensional paper sculpture made out of metal, Gull’s work still manages to highlight the essence of each subject, making them instantly recognizable.

Hadia Moiz also presents minimalist works dealing with geometry and pattern making. Her laser-cut Perspex pieces showcase tessellation-like layering of transparent symbols. By creating abstract representations of concepts like ‘Time’ as well as physical objects like ‘Drawers’, her work ponders on the use of illusion based on geometry and repetition. The transparency of the acrylic glass layers combined with an active play of light and shadow accentuate aspects of the negative and positive spaces that she is speaking about through her work. Bearing resemblance to the works of illusionist artist M.C. Escher, Moiz’s work instead presents similar illusions in physical form, therefore playing on elements of balance and depth.

The show is aptly titled ‘Folding Shadows’ as each artist creates a body of work that explores aspects of layering, pattern-making and three-dimensionality. The highlight, however, remains the experimental usage of mediums to create contrasts between subject and object, as well as the physical and the abstract.