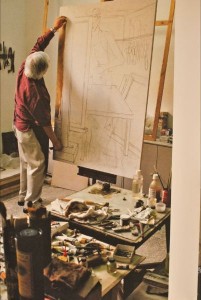 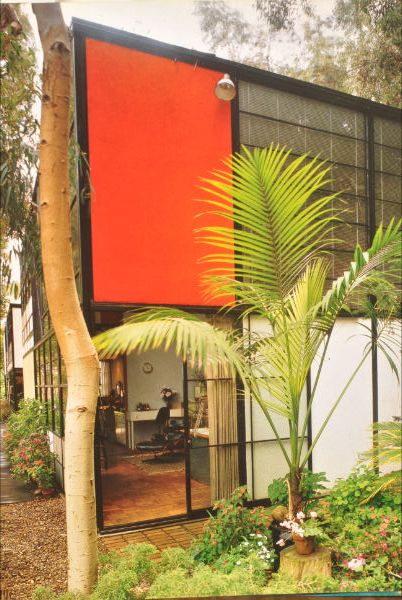 A Strange and Sublime Address: The Artist’s Studio

Initially, the word studio was used to describe the work itself rather than the workplace. Derived from the Latin word for zeal, it connotes the passion with which an artist pursues his work. Over time, the word’s meaning ventures from the act of creation to the place where creation itself, in all its many manifestations, takes place. Today the studio is acknowledged to be a space of many shapes and forms – in essence a conception as varied as the individuals who think up, work in, and inhabit them.

At turns, studios are well ordered and messy, welcoming and forbidding, forthright and shrouded in secrecy. One constant, however, remains: a studio is a laboratory for creativity, an inspired repository in which an individual strives to reinvent or refocus the world around him.

In medieval times, the studio was not the province of one individual but home to a large collective or workshop filled with artists and craftsmen toiling in anonymity. From there it evolved into Renaissance estudiolos, which frequently doubled as miniature museums, whose enlightened occupants were breaking out of obscurity and developing prestige and position in society for the first time. After the artist ceased to be regarded as a tradesman and came into his own in the early 1800s as an individual called to a vocation, art academies sprang up to teach technique and the first private artists’ studios appeared. The best of the lot ranged from simple working studios with ample space and light to grandiose showplaces of society painters that were jampacked with art and expensive objects. Less conventional artists broke away from the academies and took up residence in makeshift workspaces, which were located typically wherever rent was cheap and space was available.

At the turn of the twentieth century, Paris was still the art capital of the world, replete with academically trained artists and young iconoclasts. Artists flocked to the City of Light from around the world, most with little money. They tended to congregate in Paris’s seedy bohemian enclaves, such as Montmartre, where artists would occupy any inexpensive room they could find. At this time, there also existed a type of European studio for the better heeled. Traditionally, this was a high-ceilinged space with one or two walls of angled windows, which allowed for an abundance of light. This concept of the artist’s studio was carried to America in the late 1800s and early 1900s, and often took the form of the showplace Manhattan studio, popularised by the likes of Society favourite William Merritt Chase. He kept court and held gala receptions in his lavish Greenwich Village studio in the historic Tenth Street Studio Building, a hub for wealthy artists.

During the 1930s, urban lofts came of age in New York, replacing the more elegant European studio in the public’s mind as the artist’s place of work. These bare industrial spaces were carved out of former factories in rundown sections of the city.

Studios, temples in the popular mind to the mysteries of creativity, tend to be as photogenic as the artists whose idiosyncratic practice makes them what they are. The photographing of artists in their studios, with and at their work, addressed as a subject in itself, is a different and a rarer thing. The artist’s studio isn’t the alchemist’s study where he searches for the philosopher’s stone – something which doesn’t exist in our world – it would perhaps be more like the chemist’s laboratory, which doesn’t stop you imagining that some unexpected phenomena might appear; quite the opposite, in fact.

Of all the artists, Frank Auerbach comes nearest to the romantic image of the poor artist, suffering for his art in a windy garret. Even though his studio was in the basement, one got this impression, at least, at first – a narrow, dark alleyway with an unmarked, slightly peeling door. No bell to be found. A short, unlit passage led into as individual a studio-cum-living room as I had ever seen. The room was huge – some thirty by forty feet – lit only by two small, rather dirty windows. Far on the right, I noticed a bed, wardrobes, a chair or two and a curtain partly concealing a sink, a cooker and a few shelves with cups and dishes. The rest of the room was all painting. Benches, easels, walls, the artist himself in his paint-spattered overalls and heavy boots, were part of his painting, which naturally included the floor as well. One had to step carefully so as not to trip over the large and small mounds of partly dried multi-coloured oil paint. The floor had become a repository, thickening over the years, of all his unsuccessful paintings, ruthlessly scraped down. The whole room/studio was in dark colours, brown predominating, but with patches of black, olive green and deep purple, a kind of sombre uneven mosaic of drips and splashes.

In contrast, Howard Hodgkin’s studio on Cork Street was a rather disciplined retreat away from the hubbub of West End’s cacophonous lifestyle. With his exquisite collection of Indian miniatures on display everywhere, the pale green balustrades invited the visitor to the studio upstairs where the artist’s abstract works waited to dry up.

During a long interview session with Francis Bacon, Archimbaud once asked him: Amongst all the things that influence your work, how important is place? Can you paint wherever you are?

Francis Bacon replied: Oh no, I can only paint here in my studio. I’ve had plenty of others, but I’ve been here for nearly thirty years now and it suits me very well. I cannot work in places that are too tidy. It’s much easier for me to paint in a place like this, which is a mess. I don’t know why, but it helps me. I think it’s the same with my work. When I begin, I might have some ideas, but most of the time the only idea I have is of doing something. There’s nothing well ordered in my head; I respond to some kind of stimulation, to a mark, that’s all. If it’s going to work, then it happens afterwards on the canvas, as the work progresses. Unfortunately, the result doesn’t often live up to the initial excitement. I’m rarely happy with the result, but that’s a different problem. This mess here around us is rather like my mind; it may be a good image of what goes on inside me, that’s what it’s like, my life is like that.

Leonor Tawney enjoys working in seclusion, totally undisturbed. The studio retreat or hiding place she always transformed into a lived-in space full of objets trouves and bric-a-brac. One studio in New York that I had the chance to visit was rather like a white temple with rows of stones and feathers in precise order prepared for her sculptures. The floor was painted in brilliant white. I had to take my shoes off to my distress with a large hole in my sock, after I was reprimanded; “Coming from your part of the world, it’s astonishing that you walked in with your shoes on.”

Krishna Reddy’s present studio was even more removed, in the centre of SoHo, on the top floor (with no lift). You climbed to it by way of a metal staircase. A large window framed a pattern of roofs and chimneys. There were other personal touches in odd corners of his retreat. Despite these personal touches and symbols, the overriding feeling was of detachment, as if Krishna Reddy the artist stood at a slight remove. This was in keeping with his work: cool, straightforward description, observed with a touch of irony.

Often the environment an artist creates for himself, especially his studio, is closely in keeping with his art. Y Z Kami’s sombre portraits and calligraphic works, and their predominantly muted tones, fitted well with the dark, Victorian interior of his studio in Chelsea, New York. One entered through a small ante-room. The door led to a small elevated balcony with a dark mahogany balustrade and several steps down to the huge studio – the size of an ice-hockey rink. The centre of the studio was occupied by a large easel with a painting in progress, next to it a table with a forest of brushes, tins of paint and palette. Nearby was a large, well-worn love couch, which Kami occupied when not, working, puffing on one of his pipes or brooding. The artist fitted into this environment to perfection – solid, serene, methodical, finicky, oblivious of the outside world and caring little for the politics of the art establishment.

Not very far on Franklin Street in TriBeCa was Shahzia Sikander’s studio-loft, offered by Deitch Projects Gallery. “I am a fair hand at making chaos out of the place. When I first moved in it looked very beautiful; I thought it would be convenient not to muck it up. The design is good and makes sense to me, “ amused the artist. The studio had a north-facing window, no insulation, no telephone, and only a cold tap. It seemed a relic of a lifetime of work, and the last thing I wanted to do was to be responsible for interrupting the flow. The studio with its welcoming atmosphere was often open to all, and this is where I met Julie Mehretu for the first time.

‘Studio is where you set up your easel, ‘ remarked Musarrat Mirza, the artist in Sukkur, who works out of a makeshift studio space, carrying the easel wherever the relentless heat of Sindh takes her. In spite of the compromise, she gets plenty of light and space.

‘I definitely want a daytime studio’, Zahoor-ul-Akhlaque used to mull: ‘I could probably work in all sorts of circumstances but I thought I am totally dependent on this peculiar place, and if I lost it I’d be like a snail without a shell’, referring to the drawing room where an unfinished portrait of Faiz Ahmed Faiz awaited completion on the wooden easel. Building the studio was perhaps a testament of man over Mother Nature for Shahid Sajjad. The sculptor converted an adjacent to the house low-ceilinged toolshed-turned-maid’s quarters-turned-garage into a studio space that now contains examples of his forlorn bronze casts, unfinished wooden blocks and waste from the past thirty years. Sajjad acknowledges the benefits the studio has bestowed on his work. ‘Environment influences the forms we make, ‘he says. ‘Pieces have emerged from here that are original and special.’ Ram Kumar may probably make a similar claim for his spartan studio in New Delhi.

With as many studios as the artists themselves, the artist’s creative life still revolves around the cube, whether it’s carved out of a potato chip factory, as in the case of Billy Al Bengston or an old dilapidated mansion in Spittlefields, as in the case of Ricardo Cinalli. Cinalli, a tireless tinkerer, continues to add new structures and modify existing ones. ‘The studio’s changing all the time.’ Although he laments his building’s ‘dungeon like’ atmosphere, he admits he found it impossible to work elsewhere. To compensate for the closed-in feeling, he’s added skylights along the spine of the ceiling and imposing metal roll-up doors for light, ventilation and access. His compound’s ongoing renovation goes hand-in-hand with the artist’s love of ‘playing with space.’ Yet along with Cinalli’s love of space is his appreciation for the lack of space, especially in London. ‘My ideal studio would be on a giant plot of land,’ he says somewhat wistfully. But admitting the impossibility of that dream, for now he’ll keep experimenting with the one he has.

* The title’s been borrowed from Amit Chaudhri’s novel of the same name.