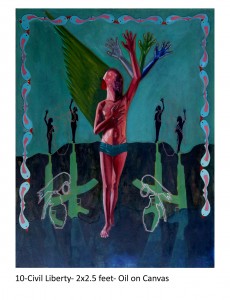 A Social Conversation: The Lost Argument by Amir Raza

Before the post-modern and modern era, art was scenic, personal and aesthetically pleasing. As the world has progressed into the modern savage garden we know today full of political and social upheavals, artists experiment now with various media to produce works which converse on something. The art of now does not always come from a personal space or visions of aesthetic beauty, but is a tool to engage with people, revealing social and political causes. In light of this scenario, Amir Raza opens his ‘Lost Argument’ at Full Circle Gallery where a full series of intriguing works greet the visitors.

Amir Raza hails from NCA with a specialization in painting. He has exhibited widely since the early 2000s in both local and international art venues. This series of work makes use of a few motifs, converted in contextual forms to depict his views on the society today. The displayed works are laden with painted images of crows, parrots, turtles and people, symbolizing specific meaning. The paintings point out the bureaucracy of a few powerful individuals who are ruling the rest of the population only to exercise their influence. This influence amasses their egos among the rich – hence the parrots – among the poor –hence the crows. Quite a few of the paintings show crows of equal sizes and same colors; they symbolize poverty just as parrots symbolize insincere intentions.

The most eye-catching of the paintings show people, mostly youngsters, dressed in masks and fancy clothing with three adults standing overhead. The adults do not have faces of their own but have heads of parrots in green, yellow and blue. Everybody is dressed as if attending a ball; the masquerade is conspicuous where the powerful and the rich enjoy their lives and the children grow up within the same bubble only to follow and repeat after their elders. Another painting shows a crow facing the visitor directly as from its beak dangles the face of a youngster, further dragged by threads which are being pulled by parrots. Again symbolizing how the lives of the indigent are ruled by poverty as talent gets crushed by the dominant and the affluent.

More paintings depict elephants, weaponry, faces of children wearing the topi, symbolizing the devastation caused through the ill-trained madrassahs in our society. A particular painting shows Jinnah shaking hands with Gandhi with parrots painted on top of the canvas, depicting the political views of the artist. Similarly, more eye catching works show a girl reading holy scripture as guns formed the background. An art installation was also a part of the exhibition which composed of a life size frame donned with fabricated pieces of weapon and toy lizards.

The purpose of this show was to portray the shallowness of the society as a whole when glamour and money fetish rules and turns everyone into blind followers of leaders and ideas that offer no true potential and value behind the promised glitz of it. Amir Raza has succeeded into developing his ideas into a colorful palette full of symbols which create a social conversation by bringing the engaging canvases to life, for engagement is the one of the true marks of artisanship and authentic art. Once art begins to bring this conversation out in the open, the argument may not be entirely lost.

3 Responses to A Social Conversation: The Lost Argument by Amir Raza