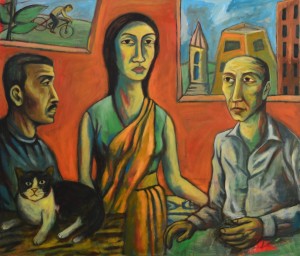 A Persistence of Vision

Moeen Faruqi’s transcendent canvases touch upon the human experience, revolving around slumber, companionship, solitude and death. A self-proclaimed visual memoir, each piece is hauntingly relevant, reflecting those intimate moments we have collectively experienced. His canvases compel the viewer to question, prompting self-investigation and empathetic response. They deliver us from the mundane, forcing us to relive our past experiences while allowing us to imagine new ones.

Faruqi imbues each of his paintings with not only his personal experiences, but also his vast art historical knowledge. From the maquillaged eyes and cavalier perspective, the checkerboard patterning common on Insular metalwork, the elongation of form reminiscent of Parmigianino’s Madonna to gestural fingers that trace their lineage to Roman oration; it is with this knowledge and mastery that Faruqi is able to successfully simplify and typify his works. It is his fidelity to his main subject and motifs which presents his career as a cohesive, continuous series.

Moeen Faruqi is a penetrating observer of the human condition. The artistic eye most akin to his, with its feeling for ordinary people so straightforwardly observed, is the photographer’s lens. In expressing his admiration for photography, Faruqi obliquely reveals something essential about himself. He has produced startlingly candid paintings whose simple, honest portrayals of men and women are so without artifice that they seem untouched by an artist’s hand. He has been compared to a voyeur, an assertion that suggests the intimacy and even the invasiveness of his mis-en-scene. Faruqi shares Diane Arbus’s obsessive curiosity about the unrevealed self; he, too, takes the part of the voyeur to find his subjects. He likes to look into people’s private chambers through doors and windows and find people standing or sitting there in the light at night. He likes to ride the els. Faruqi sees raw human nature – human nature as it is exposed in unguarded moments, glimpsed either innocently in passing or through outright staring. One envies the seeming ease with which he catches the unconscious actions of the men and women who come before his canvas.

For Faruqi, fixation – on people, especially – has become the foundation of his creative process. Pictures evolve from memories more than they do from notes or sketches. The objects of his curiosity are what distinguish his art. In rendering figures and scenes in a deadpan, even artless, manner, he manages to make his subjects the object of our scrutiny. The wonder of his paintings is that Faruqi’s fixations seem so perfectly at times to match our own, as though in his art he has revealed a viewer’s own deeply personal visions and thoughts.

For all their familiarity, however, the fixations are those of the man – Moeen Faruqi. His paintings represent one man’s private encounters and memories. What makes his pictures such rich fields of psychic drama is the tension residing in the relationship of Faruqi to the observed, in the secret life of a quiet man who would sit and stare.

In retrospect, we see that there is an interconnectedness among Faruqi’s subjects that seems to support his claim that the general sweep of his narrative on modern life was already fully conceived by the time he hit his stride as a painter in the 80s. It required only the will and the physical effort to set down in pictures the central ideas he had already formulated in his mind. The Faruqi of the 1990s and 2000s is the same artist who was defined in the 1980s. Those are defining works, not simply because they display enduring stylistic characteristics; rather, with them, Faruqi quickly laid claim to a set of images that became part of our perception of the modern world. We can speak of Faruqi houses, referring to the antiquated Victorian piles that he painted, houses whose hand-hewn quirkiness speaks of our pre-machine age past and of the individualism of the people who built and inhabited them, and whose souls still seem to animate them. There are also the white clapboard houses that emanate a Faruqi quality of light, reveal these unassuming structures in all their modern-seeming simplicity. There are as well the rows of arches of brownstones, worn buildings that have stood in the urban metropolis since the late nineteenth century, the apartment homes of the people who make a city. These brownstones, too, are from a far-off time. Faruqi’s architecture is a long way from skyscrapers and industrial megaliths, the universal symbols of the modern age. His is the modern age viewed not from on high, but from the point of view of the man and woman on the city street, on the elevated train, or in a vehicle passing through an old but changing Karachi or Toronto city.

Just as frequently, we mention Faruqi’s women. In his iconography, women loom large. And like his buildings, his women are figures suspended in time, subjects that embody enduring associations with girlhood, motherhood, and home and hearth, but now, as occupants of offices, cheap restaurants, movie theatres, rooming houses, or motel rooms, they are women strangely out of place.

Though Faruqi narrows our view of the room to focus on only a few figures, we can easily imagine the rooms beyond our frame of vision crowded with diners, socialites, habitués perhaps, who fit unselfconsciously into the scene. If there are tables for unescorted ladies at his genteel establishments, we do not see them. His are primarily men’s realms, where the only women present are either servers or consorts. As we look at the vignette and its players in The Big Sleep, we puzzle over the picture’s context. Who are these anonymous people? What sequence of events has brought them together, and what will develop from their interaction? Faruqi almost always avoids melodrama or anecdotes. The picture is oddly fragmentary and ambiguous, even hard to read. Its ill-defined spatial planes press flat against the surface, an effect that forces the viewer to register a multitude of visual data without the benefit of direction from perspective or light and shadow. The painting is suggestive rather than narrative, its appeal more psychological than sentimental.

The spaces surrounding solitary figures could be joyless and soulless spaces, the epitome of a city that moves so fast it offers little time or opportunity for meaningful human contact, in Faruqi’s paintings. The popular mythology of the modern age often addressed its metaphorically dark aspects, making public spaces synonymous with the pathos of the contemporary times, a symbol of the loneliness and despair of men and women who have lost so much on the road to the high life in the big city. Frequently, it is a middle-aged woman who is the most poignant character in the fictional, modern-day human dramas that are set against the backdrop of an uninflected wall. In Corner, for example, she is a touching reminder of the cultures that collided in the vast, populous corridors in the early twentieth century, a figure caught between the straitlaced age and the freewheeling modern era. Does she wait for someone – someone who will see her in the window and come for her through the door? Will she soon leave, or has she just returned to the refuge after a late-night rendezvous? Is she a woman with no place to go, sitting at a table reserved for single ladies? Is she perhaps a tart, ripe for the taking? Faruqi might be making that suggestion by associating her with the sumptuous dead fish on her lap. Or is she, poignantly, an unwitting temptress? In not telling his viewers where the young woman sits, Faruqi has invited his audience to impart its own narrative to this picture. Perhaps more to the point, however, Faruqi has presented a figure utterly alone and defenseless against our gaze, compelling us to consider more than a place and a character type. Faruqi’s main subject is uniquely distinctive and iconic in appearance. With a strong brow, heavily shadowed lid and boldly rimmed eye, her beginnings are found in more fluid, wistfully azure-soaked portraits. Chairs, playing cards, half drunk bottles, cats and fish and a single empty glass, highlighting that depressing time at the end of the night when a once fully occupied, lively venue dies into the hollow shell of its former self. ‘Blue Room And Other Stories’ reminds us that Faruqi’s modern sensibility lay in his profound sensitivity to his environment as a culture in flux, the impact of which he has measured in individual psychological terms.

Aasim Akhtar is a visual artist, writer and curator. He lives and teaches in Islamabad.